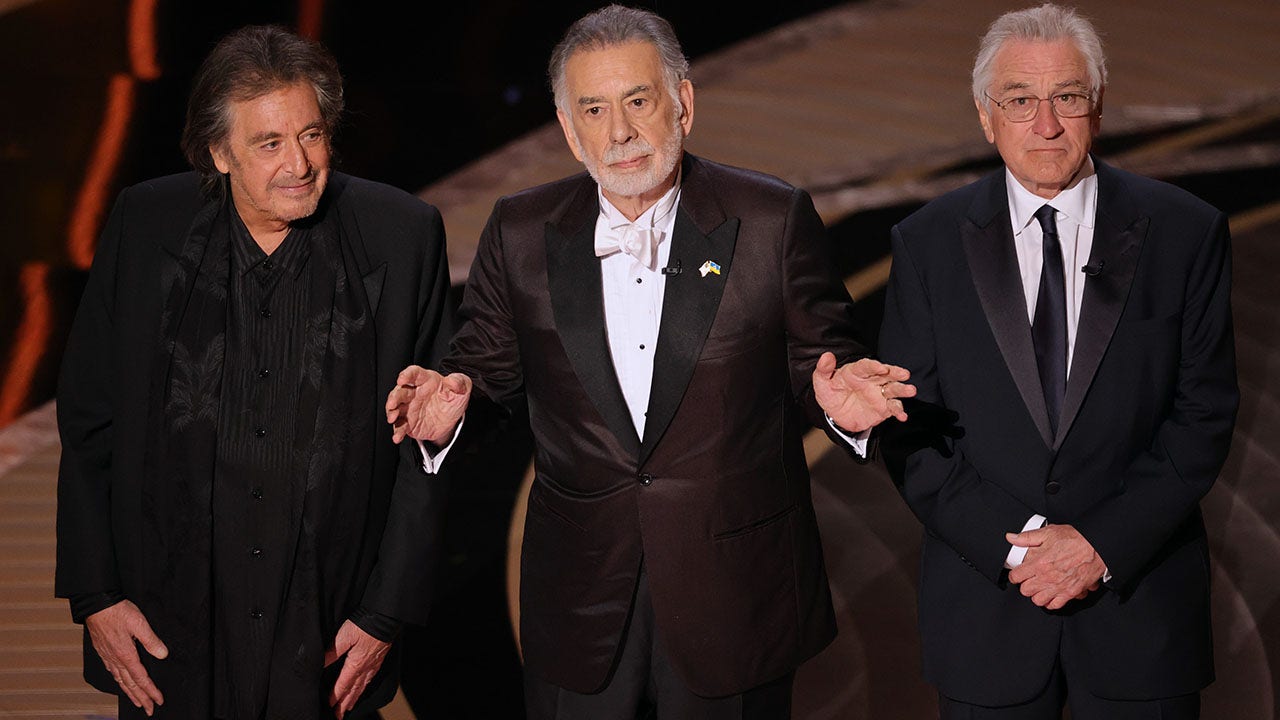 The 2022 Oscars took a moment during Sunday night’s broadcast to pay tribute to “The Godfather” film series.

After Sean “Diddy” Combs introduced the three stars, Coppola, 82, Pacino, 81, and DeNiro, 79, all joined together on stage to thank the “legends” that brought the film together years ago.

“I feel moments like this should be sincere and brief, and I’m so grateful for my wonderful friends to come here to help me celebrate with you,” the film’s director, Coppola, said of Pacino and DeNiro.

“This project that we began 50 years ago with really the most extraordinary collaborators, many of them legends and so many of them that I can’t take the time to list them all, but you know them all well,” he continued.

Coppola went on to recognize Maria Puzo, the author of the “Godfather” novels, and the late producer, Robert Evans.

“So I’m going to only thank two from the bottom of my heart,” he said.

Coppola concluded his speech with, “Thank you. Viva Ukraine!”

The historic film producer recently received a star on the Hollywood Walk of Fame. On March 21, Coppola told Variety ahead of the induction that he wasn’t overly excited about what “The Godfather” would ultimately become at the time he made the film.

AL PACINO REFLECTS ON ‘THE GODFATHER’ FAME 50 YEARS LATER: ‘HARD FOR ME TO COPE WITH’

“I thought it was going to be a special failure,” the auteur filmmaker said. “When you make a film going against the grain of what’s going on at the time, those kind of films are tough. You’re not doing what everyone expects or wants you to do.”

The American Zoetrope production head honcho also maintained that if it were up to him, Coppola would hand his honor over to his pal George Lucas, who is currently without a star, telling the publication, “If anyone deserves a star on the Walk of Fame, it’s George,” adding, “I’ll give him mine.”

Talia Shire, Francis Ford Coppola and Elle Fanning pose with a star miniature following a ceremony honoring the director with a star on the Hollywood Walk of Fame.
(Photo by Willy Sanjuan/Invision/AP, File)

“I can remember so intimately all that went on,” he said of filming the legendary mobster flick and its subsequent theater release. “You’re always so anxious when these movies come out because of those first opinions; you hope it will go well, and it’s not in your control. But by far the greatest treasure is the test of time. When people are looking at what you did 50 years later, that’s an award in and of itself.”

Pacino, one of the biggest stars in the film, recently reflected on the fame “The Godfather” created for him 50 years later in an interview with the New York Times.

Pacino rocketed to stardom after his Oscar-nominated performance in the 1972 mafia film, a role he landed after having participated in just one movie prior, 1971’s “The Panic in Needle Park.” He was, however, a rising star in New York theater at the time and a recipient of a Tony award.

Although he will always be known as the legend who played Michael Corleone, Pacino said when director Coppola approached him about taking on for the role, he didn’t take it seriously.

Al Pacino shot to superstar fame after his role as Michael Corleone in “The Godfather” film series.
(Paramount Pictures)

“It just seemed so outrageous. Here I am, talking to somebody who I think is flipped out. I said, ‘What train am I on?’ OK. Humor the guy. And he wanted me to do Michael. I thought, ‘OK, I’ll go along with this.’ I said, ‘Yes, Francis, good.’ You know how they talk to you when you’re slipping? They say, ‘Yes! Of course! Yes!’ But he wasn’t. It was the truth. And then I was given the part,” Pacino said in an interview with The New York Times.

“The Godfather” premiered in New York on March 15, 1972. All this time later, it’s still the role Pacino’s most known for. But he admits his entry into superstardom isn’t what he expected nor wanted.

“It’s hard to explain in today’s world — to explain who I was at that time and the bolt of lightning that it was,” Pacino said. “I felt like, all of a sudden, some veil was lifted, and all eyes were on me. Of course, they were on others in the film. But ‘The Godfather’ gave me a new identity that was hard for me to cope with.”