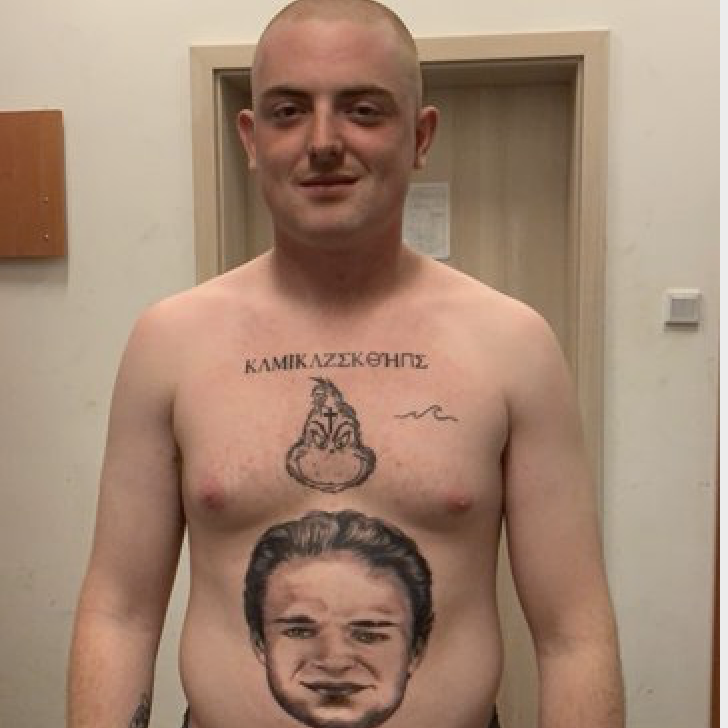 Ottawa Senators fan Mason Kohne wanted an autographed jersey from center Josh Norris, his favorite player on his favorite team. So he made him a blockbuster trade proposal:

“If I get a life size tattoo of your face on my stomach, can you send me an autographed jersey?” he wrote in an Instagram message.

Kohne, who lives in Oregon, was visiting Poland when he watched the Senators’ game against the Tampa Bay Lightning on Nov. 6, 2021. It wasn’t a memorable game for Ottawa, as the Sens lost 5-3, or for Norris, who had an assist and a minor penalty. But inspiration struck Kohne, and he messaged the 22-year-old player.

After Norris responded, Kohne immediately got a tattoo appointment at a local shop, and brought over a photo of Norris.

“They spoke Polish so I had a hard time explaining who he was,” said Kohne, “but they know who he is now.”

He also had a train to catch later in the day.

“It was rushed. I had three artists on me at once giving me the tattoo. They got done in like three hours. Which is really fast,” he said, adding that a tattoo of that size would usually take seven hours for one artist.

Kohne said he chose the stomach because he wanted to keep his arms clean for other tattoos. He also has a tattoo of the Grinch on his chest.

Norris’ face stretches from just above his waistline to the bottom portion of his chest. His belly button is perilously close to being Norris’ mouth, but “it’s in one of the shaded areas and it blends in well, I think,” he said.

Kohne sent Norris photos of the tattoo and videos of it being etched onto him, providing the player with the requested evidence. Norris acknowledged it. After a few weeks of not receiving the jersey, Kohne was concerned.

“Then he kind of vanished for two months,” he said.

He knew the Senators were on road trips and that the pandemic-interrupted season had made their schedule chaotic. But Kohne decided to post on the Senators’ Reddit about his concerns:

“I spent over $1K USD on the tattoo and sent proof. Long story short it’s 2 months later and I never got the jersey and Josh won’t respond anymore. What should I do?” he wrote.

But a few days ago, Norris held up his end of the bargain. He DM’d Kohne last week to say that the package was on its way, and it arrived this week. The Senators confirmed the story with ESPN.

“I was hyped. Relieved, too, but I was mostly hyped,” Kohne said.

Kohne received a Senators jersey with Norris’ name and number, along with an inscription that read: “Thanks for the support. All the best!” It was a simple message, but one that Kohne appreciated, since he didn’t think the jersey would be personalized to him. He also received a copy of The Hockey News autographed by Norris and fellow Senators Brady Tkachuk, Drake Batherson and Tim Stutzle.

Norris, 22, is a restricted free agent in Ottawa after this season. While he’s considered a pillar for the team’s future, what happens to Kohne’s stomach if he gets traded?

The tattoo-for-jersey story went viral this week, which Kohne said was never the intention. “Had he just responded the day after, I don’t think it would have,” he said. “I think the whole thing is funny. I don’t mind getting roasted. I think it’s hilarious.”

He said this is “the first and only time” he plans on offering to tattoo his body in exchange for memorabilia.

“I’ll definitely keep it. He’s still going to be my favorite player,” he said. “But I just hope that he stays on my favorite team, too.”