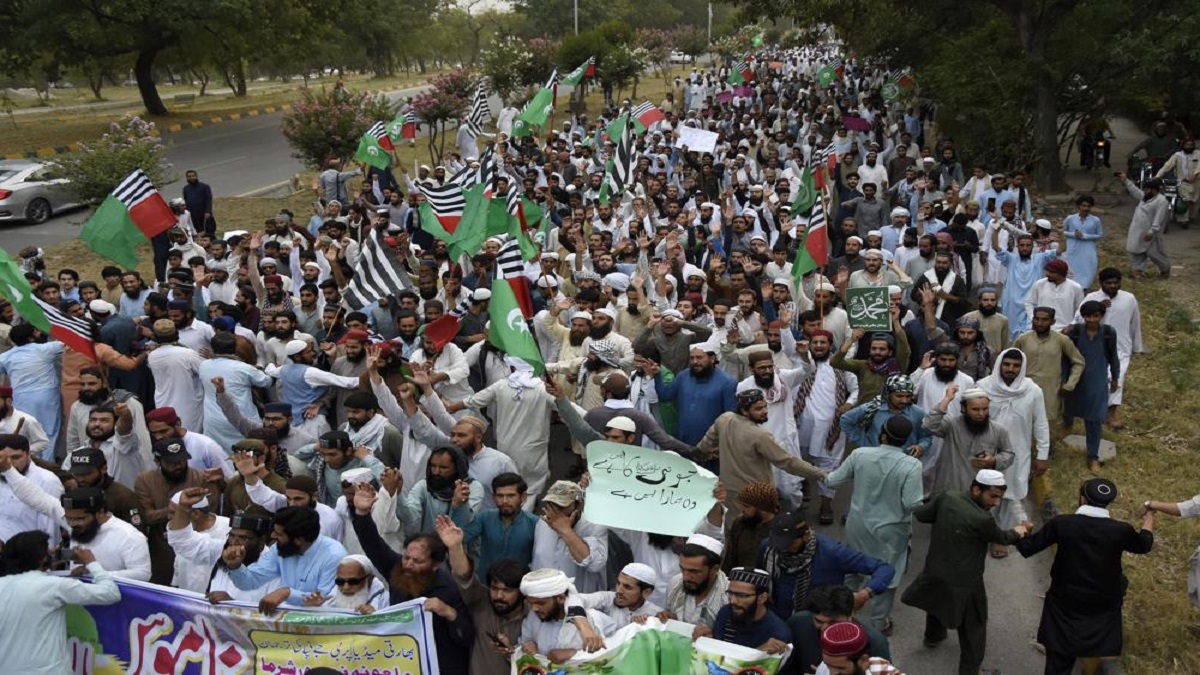 Pakistan protest: Thousands of tribesmen in Pakistan’s northwest took to the streets to protest against rising incidents of terrorism and kidnapping in the country’s tribal districts bordering Afghanistan. They also demanded the immediate restoration of peace in the region.

According to reports, more than 5,000 tribesmen took out a rally in Wana, the headquarters of the South Waziristan tribal district, against the growing unrest, terrorism, and kidnappings in their areas.

The protest comes amidst rising terrorist attacks in the country, especially in Khyber Pakhtunkhwa and Balochistan provinces that are believed to have been carried out by the banned Tehreek-i-Taliban Pakistan (TTP) group based in Afghanistan.

Pushtoon nationalist and leader of the Pushtoon Tahaffuz Movement (PTM). Manzoor Pushteen addressed the protesters carrying placards and banners. The protesters demanded the restoration of peace and harmony in the tribal districts.

All the shops and markets were closed in Wana bazaar as a protest against the surge in unrest in the district.

Pushteen said the fresh wave of unrest has scared traders and investors and they were not ready to run their businesses in the prevailing law and order situation. He said the tribal youth can take up arms like terrorists if the public order was not improved.

The protesters said it is the responsibility of the government to ensure the protection of the lives and properties of the citizens in the tribal areas. The government should take measures for the maintenance of peace in the area and the release of hostages from the custody of kidnappers, they said.

Meanwhile, TTP chief Mufti Noor Wali Mehsud in a video message tried to justify the violence perpetrated by the rebel group and said they were open to guidance from Pakistan’s religious scholars if they believe “the direction of our jihad” is wrong.

He also asked Pakistan’s religious clerics to stop calling his group a terrorist organisation. He said the TTP still adheres to the cease-fire in line with talks brokered by the Taliban-led government in Afghanistan.

ALSO READ: Taliban mocks Pakistan, reminds it of its surrender to Indian forces in 1971 war

What did Tehreek-i-Taliban Pakistan say?

The TTP announced the end of an indefinite ceasefire with the government in November last year. The TTP has been blamed for several deadly attacks across Pakistan, including an attack on army headquarters in 2009, assaults on military bases, and the 2008 bombing of the Marriott Hotel in Islamabad.

In 2014, the Pakistani Taliban stormed the Army Public School (APS) in the northwestern city of Peshawar, killing at least 150 people, including 131 students. The attack sent shockwaves across the world and was widely condemned.