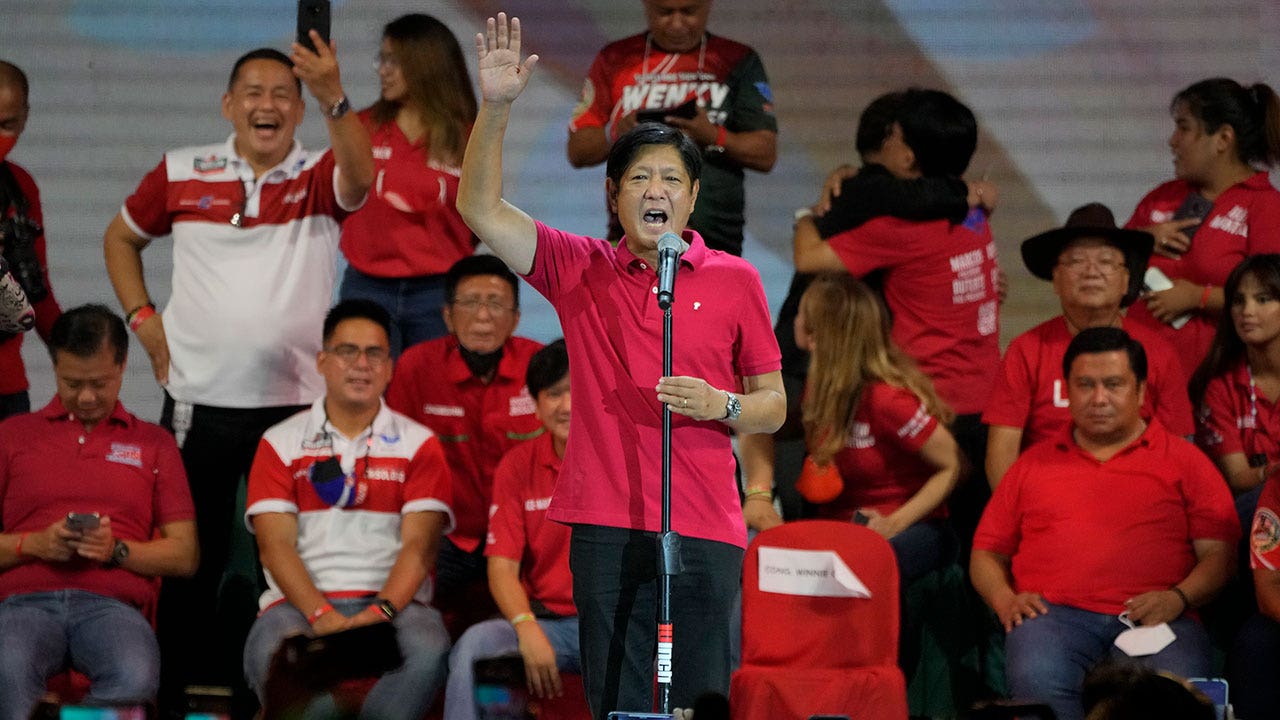 More than three decades after a largely peaceful “People Power” revolt overthrew Philippine dictator Ferdinand Marcos, his son and namesake is the top choice in most voter-preference surveys. Some of the major issues in Monday’s vote:

A triumph by Ferdinand Marcos Jr. would be a stunning reversal of the 1986 pro-democracy uprising that booted his father from office into global infamy. Many Filipinos aware of the human rights atrocities and plunder that unfolded under the elder Marcos dictatorship would likely push back against any perceived threat to democracy or attempt by Marcos Jr. to recover assets seized from his family as ill-gotten wealth.

The election winner inherits immense problems, including an economy battered by the coronavirus pandemic, deeper poverty and unemployment, hyperinflation due to skyrocketing oil and gas prices, decades-old insurgencies and inflamed political divisions. He or she also may face calls to prosecute outgoing President Rodrigo Duterte for his bloody crackdown on illegal drugs. The International Criminal Court has been investigating the killings of thousands of mostly poor petty drug suspects as a possible crime against humanity.

A former provincial governor, congressman and senator, the 64-year-old son of the late dictator is making the most impressive attempt yet of the Marcos family to recapture the presidency. His mother, Imelda Marcos, twice unsuccessfully attempted to retake the seat of power after returning with her children to the Philippines from exile in the United States, where her husband died in 1989.

Marcos Jr. has defended his father’s legacy and steadfastly refuses to apologize for and acknowledge the atrocities and plunder during the dictatorship. Married to a lawyer, with whom he has three sons, he has stayed away from controversies, including a past tax conviction and the Marcos family’s refusal to pay a huge estate tax. Throughout his campaign, he tenaciously stuck to a battle cry of national unity. He denies accusations that he financed a years-long social media campaign that harnessed online trolls to smear opponents and whitewash the Marcos family’s checkered history, daring critics to “show me one.”

As an economics student at the University of the Philippines in the 1980s, Leni Robredo joined the massive protests that led to the ouster of the elder Marcos. The 57-year-old also took up law and won a seat in the House of Representatives in 2013 in her first foray into politics after her husband, a respected politician, died in a plane crash in 2012. She defeated Marcos Jr. in the 2016 vice presidential race with a narrow margin in their first electoral faceoff. Her advocacies center on defending human rights and empowering the poor partly by teaching them their legal rights.

Vice President Leni Robredo greets supporters as a Philippine flag is waved during a campaign rally that coincides with her birthday in Pasay City, Philippines, on April 24, 2022.
(AP Photo/Aaron Favila)

The daughter of a trial court judge, Robredo does not belong to any of the prominent families that have dominated Philippine politics for generations, and is running as an independent propped by a network of campaign volunteers. As the opposition vice president, who was separately elected from Duterte, she condemned the killings of mostly poor drug suspects as part of his crackdown, angering the brash-talking leader and straining their ties for years. The mother of three has been cited for her integrity and a lifestyle that shuns the trappings of power – she used to regularly travel alone by bus to her home province as a congeresswoman.

Eight other presidential aspirants have lagged far behind in pre-elections surveys, including Manny Pacquiao, the 43-year-old former boxing star, who vowed to build houses for the poor and lock up corrupt politicians in a “mega-prison.” Manila Mayor Isko Moreno, a 47-year-old former TV heartthrob, banked on his rags-to-power life story and public awe over his massive cleanup of the capital. Sen. Panfilo Lacson, a 73-year-old former national police chief, has promised to continue exploiting his investigative skills to expose major government corruption.

Aside from the presidency, more than 18,000 government posts will be contested in the elections, including half of the 24-member Senate, more than 300 seats in the House of Representatives, as well as provincial and local offices across the archipelago of more than 109 million Filipinos. About 67 million are registered to cast their ballot. Voting will take place over 13 hours Monday, the one-hour extension intended to compensate for slower queues due to social distancing and other coronavirus safeguards. After voting centers close, thousands of counting machines around the country will send unofficial results to be tallied. A partial, unofficial count could reveal a clear winner within hours, but a close race could take longer. The official count and canvassing by Congress may take weeks.

Thousands of police and military personnel have been deployed given long-standing risks posed by communist and Muslim rebels and a history of often bloody family and political rivalries in rural areas. In 2009, gunmen deployed by the family of southern Maguindanao province’s then-governor massacred 58 people, including 32 journalists, in an attack on an election convoy that shocked the world.