The ‘older white man’ who was on a Bumble date with a 23-year-old Connecticut woman before she was found dead on her blood-stained bed after a night of drinking has been revealed as a 37-year-old design engineer who she knew for three days.

Lawyers are now calling for an independent investigation into the death of Lauren  Smith-Fields who was found dead in her Bridgeport apartment in the early morning hours of December 12, 2021, by Matthew LaFountain, 37, who she met on the Bumble dating app. Her cause of death is not known.

LaFountain works as a design engineer at Connecticut-based Times Microwave System – a company which manufactures cables for the military, aerospace and telecommunications companies.

Smith-Fields and LaFountain were hanging out and drinking the night before her body was found, according to a the police report obtained by Dailymail.com. LaFountain claims Smith-Fields became ill and threw up in her bathroom before the two continued drinking tequila mixed drinks.

Her brother, Lakeem Jetter, told Rolling Stone that several things were found in the apartment, including a used condom, lubricant, bloody sheets on her bed and an unidentified pill.

‘The first night we saw cups there, flipped plates and the lube. The cops didn’t take any of the cups to test the liquor,’ Jetter said. ‘There was a big stain of blood in the middle of her bed, with streaks going to the right side.’

Smith-Fields’ family is suing Bridgeport Police after becoming frustrated with how they are handling the case, attorney Darnell Crosland told Dailymail.com, alleging the detective in charge of her case told them to stop contacting him.

Crosland also said that he was uninterested in pursuing Smith-Field’s date as a suspect, whom they described as an ‘older white man.’

The ‘older white man’ who was on a Bumble date with 23-year-old Connecticut Lauren Smith-Fields before she was found dead after a night of drinking has been revealed as Matthew LaFountain, a 37-year-old design engineer she knew for three days

‘They’re waiting for the autopsy before questioning anyone,’ he said. ‘But there are parts of the investigation that can be done without the autopsy. They can obtain the messages from Bumble. But that’s not being done.’

The report also revealed that Smith-Fields asked LaFountain for $40 to get her nails done and then to meet her at her residence where the pair reportedly took ‘shots of tequila’.

LaFountain claims Smith-Fields became ill and threw up in her bathroom before the two continued drinking tequila mixed drinks. They reportedly played games, ate food and began watching a movie when Smith-Fields allegedly received a text, went outside to get something from her brother and then, upon her return, went into her bathroom for 10 to 15 minutes.

Her date told police ‘he thought it was odd, but didn’t feel it was his place to say anything as he didn’t know her that well,’ the incident report reportedly reads.

Afterwards, the pair continued to watch the movie and finished the bottle of tequila before she fell asleep on the couch. LaFountain allegedly carried her to her bedroom and the two went to bed.

He claims he woke up around 3am to use the bathroom and found Smith-Fields snoring. Then, around 6:30am he reportedly found her lying on her right side with blood coming out of her right nostril and not breathing. He then called 911.

Once police arrived on scene, Smith-Fields’ landlord was contacted. The landlord did not have family contact information so it wasn’t until days later when Shantell Fields visited the unit that she learned her daughter had died.

‘When I asked the officer about the guy, he said he was a very nice guy and they weren’t looking into him anymore. It was almost like he was sticking up for him and it seemed weird to hear that from a detective,’ her brother Lakeem Jetter told NBC Connecticut.

‘He told me directly on the phone to stop calling him and hung up in my face, it was just like total disrespect, like that’s what you tell a family that’s going through grief and trying to find answers?’ 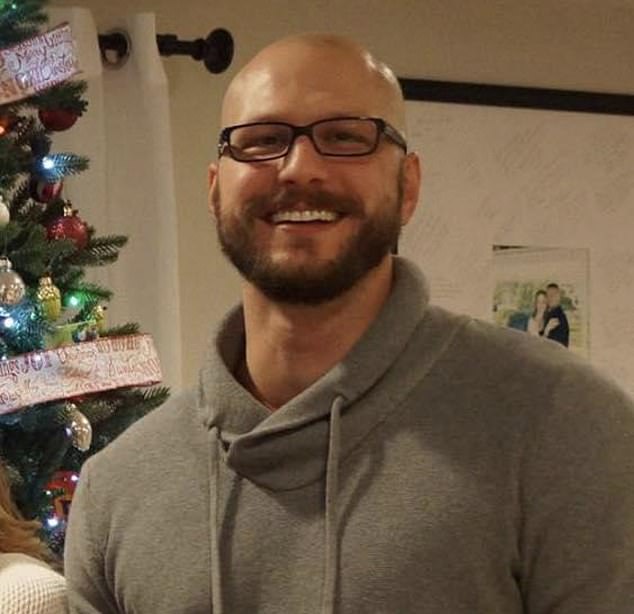 Lauren Smith-Fields was found dead in her Bridgeport apartment on December 12, 2021, by Matthew LaFountain, who she met on the Bumble dating app. 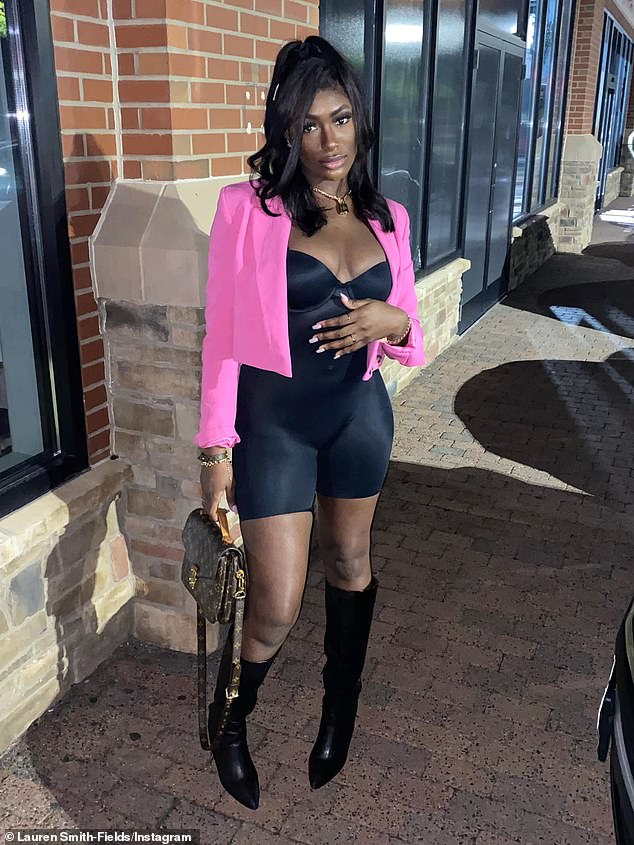 While spending the night with her, LaFountain reportedly woke up around 6.30am and found Smith-Fields (pictured) lying on her right side with blood coming out of her right nostril and not breathing. He then called 911

Jetter also alleged police were not thorough in their initial crime scene investigation, noting that while officers confiscated her phone, passport and $1,345 in cash, they neglected to collect other pieces of potential evidence.

He told Rolling Stone they found a used condom in the trash, lubricant, bloody sheets on her bed and an unidentified pill in the unit.

‘The first night we saw cups there, flipped plates and the lube. The cops didn’t take any of the cups to test the liquor,’ said Jetter. ‘There was a big stain of blood in the middle of her bed, with streaks going to the right side.’

Smith-Fields’ mother also claims the officers made her feel as if the investigation was ‘not important.’

‘We have seen the amount of resources that have gone to other cases involving missing white women like Gabby Petito and we know so many black woman are missing so much in this country,’ attorney Darnell Crosland said. ‘Everyone is speaking out, everyone is insulted with the way the Bridgeport police and the Bridgeport city has dealt with us.’

The family plans to serve notice of an intention to sue to the City of Bridgeport and intends to make a formal announcement on Sunday. They also plan to hire a private investigator to look into the case. Meantime, they have paid for an independent autopsy of Smith-Fields’ body. 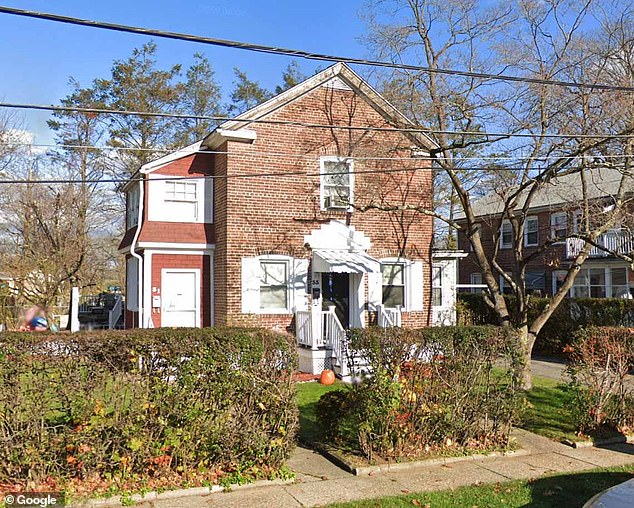 Smith-Fields was found dead in her Bridgeport apartment (pictured) on December 12 after a night of drinking by Matthew LaFountain, a man she met on a dating app called Bumble. More than a month later ‘her cause of death is pending further studies’ 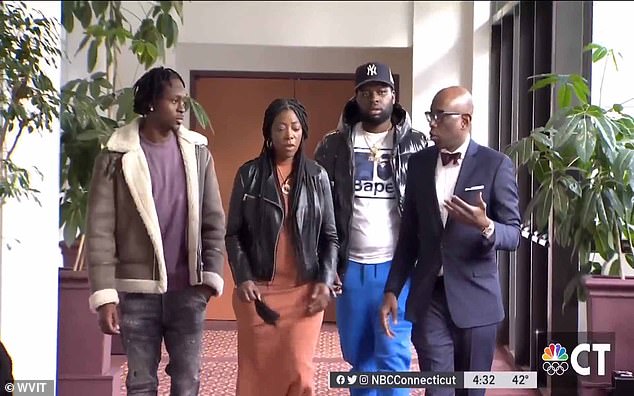 Her loved ones claim police did not pursue LaFountain as a suspect, failed to collect what they believe to be essential evidence from the scene and told the family to stop calling about the case (Pictured L to R: Unamed relative, mother Shantell Smith, brother Lakeem Jetter and attorney Darnell Crosland)

The family has several concerns with the incident report, Rolling Stone reported.

‘I haven’t texted my sister since December 4,’ Jetter said, noting that he did call Smith-Fields on the night of December 11 to bring out a basket of clothes he was picking up.

‘I didn’t know that anybody was in there. She came out and she was out there for like 10-15 minutes and she walked back into the house. She looked normal. She didn’t look sick, she didn’t look tired, she didn’t look drunk. I’m her second older brother, if I would have seen her drunk I would’ve said ‘What are you doing?’ … ‘Why do you look like that?’

Her mother also claims that Smith-Fields had gotten her nails done earlier that week and that she wouldn’t have needed to get them done again. Fields also noted that her nails were ‘still so intact’ they didn’t need to be done for her funeral.

Crosland, who is representing Smith-Fields’ family, said he is seeking justice for the deceased woman.

‘We’re suing the city of Bridgeport for failure to prosecute and failure to protect this family under the 14th Amendment,’ Crosland said. He is planning to evoke the portion of the Constitution that provides equal protection under the law for all citizens, including black people.

‘It’s happening all too often with black girls missing across this world, across this country, and no one says anything,’ the lawyer said. ‘When a white woman goes missing, the whole world drops everything. We are done with this valuation.’

He added: ‘We want an independent investigation by an independent state agency or federal agency to look into this case. We want the DOJ like when they have to step in for cases like a Mike Brown, this family has to continue to deal with the loss of their loved one, work and they shouldn’t have to do that when they are hard-working tax-payers.’ 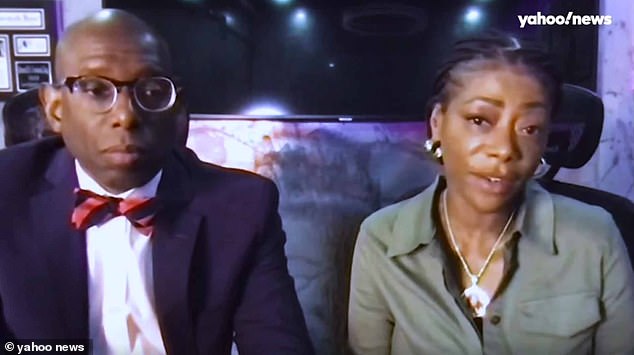 Attorney Darnell Crosland (pictured on left with Shantell Fields), who is representing Smith-Fields’ family, said he is seeking justice for the deceased woman. He said: ‘We’re suing the city of Bridgeport for failure to prosecute and failure to protect this family under the 14th Amendment’ and claims this happens ‘all too often with black girls’ 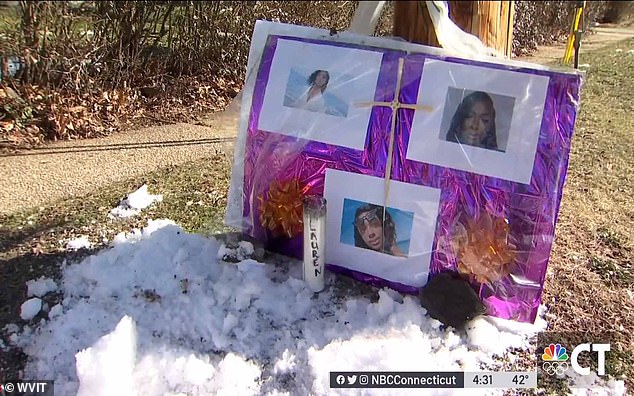 A makeshift memorial has been set up outside Smith-Fields’ apartment and a GoFundMe established to help the family fund their private investigation. The family is also planning a citywide march to raise awareness about the case and demand justice for their loved one

Crosland claims Bridgeport police have issued their condolences, but only after the case was brought to their attention by the media.

‘We see them now offering their condolences after reporters have been asking them for questions and when we hear about it, it’s like a slap in the face, we don’t want excuses, we want answers,’ he said. ‘I have no faith in the Bridgeport Police Department, we have been disrespected and they didn’t handle our loved one’s case like they should have as soon as this happened.’

Meanwhile, a makeshift memorial has been set up outside Smith-Fields’ apartment and a GoFundMe established to help the family fund their private investigation.

Fields and Jetter are also planning a citywide march to raise awareness about the case and demand justice for their loved one.

‘We want justice, we want answers, I mean whatever happened happened that night, we want to know and we want to feel like they care as much as we care,’ said Jetter.

‘I never thought something like this would happen where you lose a family member and we are treated like you don’t exist so we are going to ensure this city remembers Lauren Smith-Fields.’

‘I miss my daughter and I see her in everything that I do and it pains me to know that I’ll never get to see her again,’ echoed Fields.

A peaceful march will be held in Smith-Fields’ name at 1:30pm on Sunday.