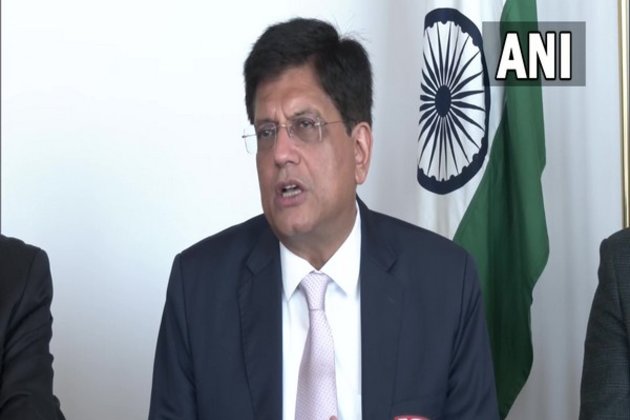 Geneva [Switzerland], June 12 (ANI): After attending the Ministerial Meeting of G33, a coalition of developing countries of which India is a key member, in Geneva, Union Minister of Commerce and Industry, Piyush Goyal on Sunday said that India will not buckle under pressure and it is ready to face any challenge.

Goyal’s remarks came during a press briefing after the G33 Ministerial meeting where the Indian delegation led by him presented India’s stand on various issues of common interests while keeping in mind the fundamental principles of sustainable development goals (SDGs).

“No one can pressurise today’s ‘Aatmanirbhar Bharat’. We can face any challenge. We don’t take any decision under pressure,” he said during the press briefing.

The Minister said that India abides by ‘Vasudhaiva Kutumbakam’ (the world is one family). “We presented our stand while keeping in mind the fundamental principles of sustainable development goals. We raised the concern of developing and underdeveloped countries,” he added.

On the sidelines of the 12th WTO ministerial meeting in the Swiss town of Geneva on Sunday, Goyal held discussions with the Director-General WTO, Ngozi Okonjo-Iweala pertaining to prospects of a permanent solution to the public stockholding for food security.

At the G33 Ministerial Meeting, a coalition of developing countries of which India is a key member, Minister Piyush Goyal also held extensive talks with his counterparts from developing and least developed nations.

Taking to Twitter, Goyal wrote, “Fighting for rights of our farmers within an hour of landing at WTO, Geneva at the G33 Ministerial Meeting. Discussed prospects of a permanent solution to public stockholding for food security with DG Ngozi Okonjo-Iweala and my counterparts from the developing and least developed nations.”Moreover, the Commerce and Industry Minister Goyal will also meet with the Trade Representative of the United States of America, Katherine Tai.

The ministerial meeting began in Geneva, Switzerland on Sunday, after a gap of five years.

The Indian delegation at the meeting is led by Commerce and Industry Minister Piyush Goyal. “India has a vital stake in protecting the interests of all stakeholders in the country as well as the interests of the developing and poor nations that look up to the leadership of India at multilateral forums including WTO,” the Ministry of CommerceIndustry said earlier in a statement.

The key areas of discussions and negotiations at this year’s conference include WTO’s response to the pandemic, fisheries subsidies negotiations, agriculture issues including Public Stockholding for food security, WTO reforms and moratorium on customs duties on electronic transmission.

The WTO Director-General in May 2022 brought three draft texts on agriculture, trade and food security and exemption of the World Food Programme from export restrictions for negotiations.

“India has reservations about some of the provisions in the draft decisions and has been engaging in the process of discussions and negotiations in order to be able to preserve the rights under the agreement on agriculture without undermining the existing ministerial mandates,” the Ministry of CommerceIndustry added.

An important issue under negotiation at the WTO relates to the protection of India’s food grain procurement programme at Minimum Support Prices (MSP).

Such programmes involve the purchase from farmers at administered prices and are key to supporting the farmers and consumers in the country. WTO rules limit the subsidy that can be provided to such products being procured.

This issue is being negotiated at the WTO by the G-33 and the African Group which has come together along with the African, Caribbean and Pacific countries (ACP group) in submitting a proposal on a permanent solution to the issue of public stockholding for food security purposes on 31 May 2022.

India co-sponsored a G-33 proposal for a permanent solution on PSH for food security purposes at the WTO, on 15 September 2021, which had the co-sponsorship of 38 Members.

In the negotiations, improvements are being sought by developing countries over the ministerial decision adopted at the ninth ministerial conference of the WTO in Bali in December 2013 where members agreed to negotiate a permanent solution on the issue of public stockholding for food security purposes by the 11th Ministerial Conference of the WTO.

It was agreed that in the interim, until a permanent solution is reached, Members would exercise due restraint (commonly termed as ‘peace clause’) in raising disputes in respect of public stockholding programmes for food security purposes instituted before 7th December 2013, even if countries exceeded their permissible limits.Consequent to the firm stand taken by India at the WTO, this peace clause was extended by a decision of the WTO General Council (GC) in November 2014 until a permanent solution was agreed and adopted.

Thus, it was ensured that the ‘peace clause’ would be available in perpetuity. At the Nairobi Ministerial Conference held in December 2015, WTO members agreed to engage constructively to negotiate a permanent solution.

India neither wants to link public stock holding (PSH) issue with other agriculture issues nor a work programme as negotiating a permanent solution has a standalone mandate at the WTO, the ministry said. (ANI)