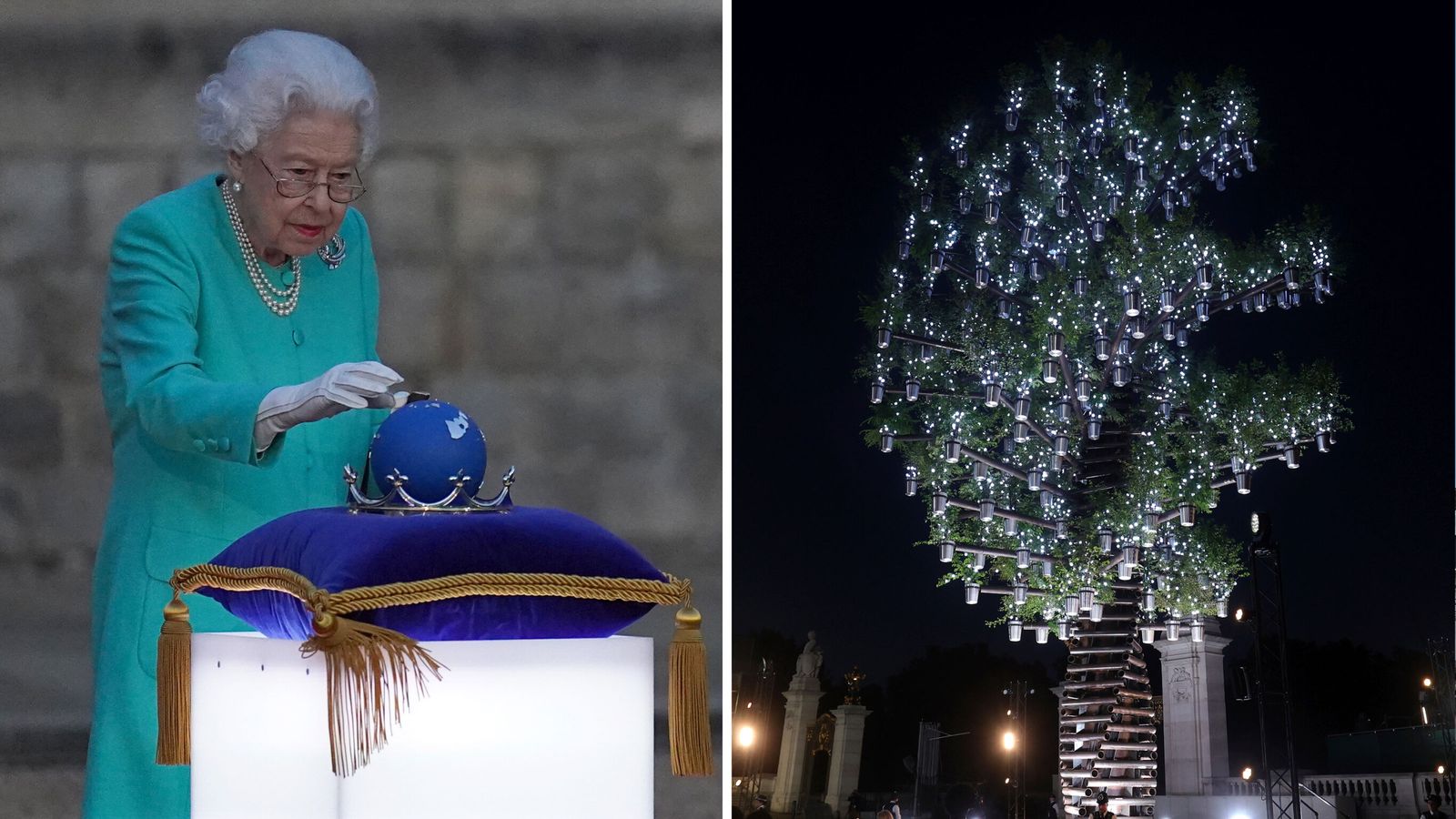 The Queen has made her second appearance of the day as she triggered the lighting of the principal Jubilee beacon at Windsor Castle.

At the same time thousands of beacons were lit in villages, towns and cities across the UK to honour the Queen’s 70-year reign.

Her Majesty started the ceremony from the quadrangle at Windsor Castle, with the Duke of Cambridge representing his grandmother, alongside other members of the Royal Family, at Buckingham Palace, the site of the “Tree of Trees” principal beacon.

Although traditionally the principal beacon would be set on fire, this year it took the form of a near-70ft light installation.

At Windsor Castle, the Queen, wearing a green jacket, gloves and glasses, pressed the quadrangle to start the lighting of the Jubilee.

As she walked from the castle’s sovereign entrance into the Quadrangle, the Queen was greeted by more than 100 people who live within the walls of the royal home and were invited to the event.

Chief Yeoman Warder, Peter McGowran, from the Tower of London, placed the Commonwealth of Nations Globe on the stand before the keen pressed it, triggering the lighting of the beacon.

Prince William was present to see the Tree of Trees light up, while people across the country lit up their beacons, including archers lighting fire to the beacons at Hadrian’s Wall in Scotland.

More than 3,500 beacons were simultaneously lit, creating a network of tributes stretching throughout the UK, including ones at historic sites including the Tower of London, Windsor Great Park, Hillsborough Castle, Lambeth Palace and the Queen’s estates at Sandringham and Balmoral.

For the first time, beacons will be lit throughout the day in each of the Commonwealth’s 54 capital cities.

Grammy-winner Gregory Porter and the London Community Gospel Choir led the performance of a new song for the Commonwealth – A Life Lived with Grace – after the Buckingham Palace beacon was lit.

The song will also be performed by choirs across all the Commonwealth countries.

Ahead of the ceremony, William described the first day of the jubilee celebrations as a “big day” and “pretty impressive”.

Speaking to Mike Bloomberg, sponsor of the Tree of Trees, he said: “It was a big day today, it was pretty impressive. Did you see the flypast?”

The event was organised by pageant master, Bruno Peake, who said more than 3,500 beacons would be lit around the world.

After speaking to the monarch he added: “She said, ‘More beacons, every time you do it you have more beacons’ – which is great.

“To be able to stand next to your monarch commemorating a unique anniversary and moment in her life is such a privilege. It looked as though she didn’t want to leave.”

The Queen was wearing a new piece of jewellery for the event – a diamond brooch which was a gift commissioned by the Goldsmiths’ Company to mark her Platinum Jubilee.

The brooch was inspired by the four home nations which are represented by four diamond swirls and the national flowers – rose, thistle, daffodil and shamrock.

It also includes a representation of the flowering plant lily of the valley, which was part of the Queen’s Coronation bouquet.

Read more:
Why are beacons lit for big royal events?

Earlier today the Queen appeared at Buckingham Palace for the Trooping the Colour parade and a flypast.

However, Buckingham Place later announced the monarch would not be attending Friday’s thanksgiving service at St Paul’s Cathedral after experiencing “some discomfort” during the event.

Her son, Prince Andrew will not be at the service after testing positive for COVID and neither will the Archbishop of Canterbury, who has also contracted the virus.