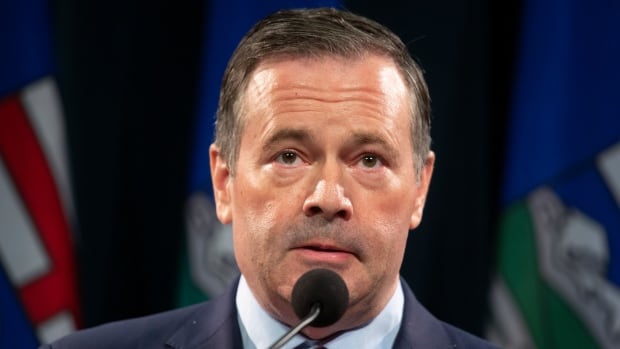 A former Alberta legislature staff member is suing the premier’s office, saying she suffered from a toxic workplace culture and was fired as retribution for speaking out about the problems she saw there.

The allegations in Ariella Kimmel’s lawsuit include sexual harassment and heavy drinking by ministers and staff in legislature offices, as well as claims that senior staff in the premier’s office fabricated rumours about her contributing to her termination.

CBC News has obtained a copy of the legal document. None of the allegations has been proven in court.

Kimmel worked as the chief of staff to the minister of jobs, economy and innovation from August 2020 until she was fired in February 2021. She had worked with Jason Kenney’s UCP government since May 2019.

Kenney’s office is the overseeing office responsible for ministries.

The statement of claim says in mid-October 2020, Kimmel found Agriculture and Forestry Minister Devin Dreeshen drinking with a chief of staff in his office. They later met up in another minister’s office, where the ministers and staff in attendance appeared to be heavily intoxicated, Kimmel said.

Her statement said that during the gathering, she expressed concern about how drunk Dreeshen was and encouraged him to stop drinking.

After they left the suite, the lawsuit alleges, the minister confronted her about the intervention and “aggressively yelled at her to the point where she was in tears and a concerned bystander intervened.”

Prior to her appointment as chief of staff that year, Kimmel had been in an on-and-off relationship with Dreeshen.

Two days later, another group of staff met for drinks in the minister of health’s office. That night, Ivan Bernardo, the minister’s principal advisor, is alleged to have made a sexually inappropriate comment to one of Kimmel’s female staff members.

“I haven’t seen you on this floor before because with a body like that, I would have noticed you,” the statement of claim alleges Bernardo said.

The statement also alleges Bernardo was known to have been sexually inappropriate with other women in the building.

The next day, Kimmel reported the exchange to Chris Thresher, the chief of staff in health, and Matt Wolf, the premier’s director of issues management.

She heard nothing for almost a month.

On Nov. 17, Kenney’s principal secretary, Larry Kaumeyer, asked to meet with her because people were worried about her being upset, the lawsuit says.

Kimmel indicated she told Kaumeyer about the confrontation with Dreeshen and the excessive office drinking and the alleged sexual harassment by Bernardo.

The statement says Kaumeyer told her that Bernardo was “not going to be fired” and had decided to leave his position at the end of the year anyway. He did not indicate whether her other concerns would be addressed. Kaumeyer no longer works in the premier’s office.

“Sexual harassment is abhorrent and has no place in our workplaces or society,” Pam Livingston, the premier’s chief of staff, wrote to CBC News.

“This government has zero tolerance for harassment and takes all allegations of this nature very seriously. We are fortunate to have a highly skilled and diverse public service and we are committed to providing a safe and productive workplace for all of them.”

The statement said that the government cannot comment on confidential human resource matters, that Kimmel’s termination was unrelated to the matters in her lawsuit and that it would respond fully to the allegations in court.

Kenney’s office has also promised to launch an independent review of human resources policies for political staff to make sure the processes are clear and staff are informed of the procedures. Political staff are currently mandated to take respect-in-the-workplace training. The statement did not address Dreeshen’s alleged behaviour.

CBC News also reached out to the individuals named in the statement of claim.

“It would be inappropriate for me to comment in any manner on the statements made within the claim, as I will likely be called as a witness in any proceedings,” Bernardo wrote in an email. “I welcome an independent and impartial review by the court, and I look forward to providing my testimony.”

Ministers, senior staff looped in on concerns of bad behaviour

In December 2020, Kimmel had dinner with Rebecca Schulz, the minister of children’s services. The document says the minister said she had heard rumours of sexual harassment and wanted to know what Kimmel knew. She shared her allegations with the minister without disclosing names.

During the dinner, the claim says, Environment and Parks Minister Jason Nixon called Schulz to discuss Bernardo’s alleged behaviour. It said Nixon mentioned he would raise the matter with the premier’s chief of staff.

“Sexual harassment is completely unacceptable and disgusting,” Schulz said in a statement to CBC News on Wednesday. “After hearing of allegations, I met with Ms. Kimmel and discussed the concerns that I had heard. I then spoke with the House leader about these concerns. After our discussion, he raised them with the premier’s office and confirmed the premier’s office was dealing with the allegations.”

The next day, Kimmel spoke to Nixon about her concern that the harassment allegation was not being addressed properly. The lawsuit says he promised it would be addressed immediately.

“I was approached about some troubling rumours involving Mr. Bernardo’s behaviour,” Nixon said in a written statement to CBC News.

“Upon hearing this, I phoned a trusted cabinet colleague to ask if they had heard similar rumours. After speaking with Minister Schulz, I immediately contacted the premier’s then-chief of staff and human resources to inform them of the rumours I had heard and was told it was being dealt with.”

Bernardo was told in December that his contract wasn’t getting renewed.

CBC News obtained the email Bernardo sent to legislature staff on Dec. 13, 2020, announcing he had resigned his position to return to practising law. Bernardo is now a lawyer with Miller Thomson LLP in Calgary.

To Kimmel’s knowledge, no formal sexual harassment investigation was undertaken and no official support was offered by the premier’s office to the women affected.

After Bernardo left, Kimmel spoke to Amber Griffith, the premier’s human resources manager, about what she deemed to be insufficient measures to deal with harassment. Kimmel recommended that staff be provided with a written sexual harassment policy that would include a clear mechanism for complaints and investigations, according to the document.

Kimmel said she wasn’t confident she could provide her staff with a safe working environment until a policy was implemented.

The lawsuit suggests Griffith was offended by the comment and told Kimmel another woman who had come forward with a complaint about Bernardo had, in fact, been promoted.

After the December holiday break, Kimmel learned senior staff had been circulating rumours that she was the source of multiple leaks to the media, the statement of claim says. She maintains she did not disclose any information unauthorized.

On Jan. 6, 2021, Kimmel again raised concerns about Dreeshen’s aggressive conduct in October and continued “excessive drinking,” this time to Livingston, now Kenney’s chief of staff. She also confided that an anonymous social media account had begun tweeting details of her relationship with the minister.

The same concerns about Dreeshen’s intoxication had been raised to other senior Kenney staff members and, the statement of claim says, no action was taken.

Three days later, the statement says, she met again with Kenney’s principal secretary to express concern about the rumours targeting her. Kaumeyer told Kimmel she would not be fired.

On Feb. 5, Kimmel was told she was being terminated. She alleges that Kaumeyer said at the time that it was “the best thing for you.”

“We’ve seen a lot in the past two years, cases or media stories about misconduct in political offices and political staffers suffering and often having to suffer in silence. And this is a case that’s just going to blow the lid off of that and show that everybody deserves a safe and healthy work environment,” Kimmel’s lawyer, Kathryn Marshall, an employment lawyer at Milburn & Associates, told CBC News.

“Politicians have to lead by example, and this is going to set a new standard to how political staff need to be treated.”

The lawsuit is seeking more than $399,000 for damages and the equivalent of her salary until her contract’s end date in May 2023.

It lists the damages as subjecting Kimmel to a “poisoned work environment,” fabricating and spreading rumours against her, failing to implement a robust sexual harassment policy, terminating her employment in reprisal, causing mental distress and reputational harm, and affecting her future employment opportunities.

“She has suffered significant mental and physical distress due to the unconscionable, malicious, and vicious actions and inactions taken,” it concludes.