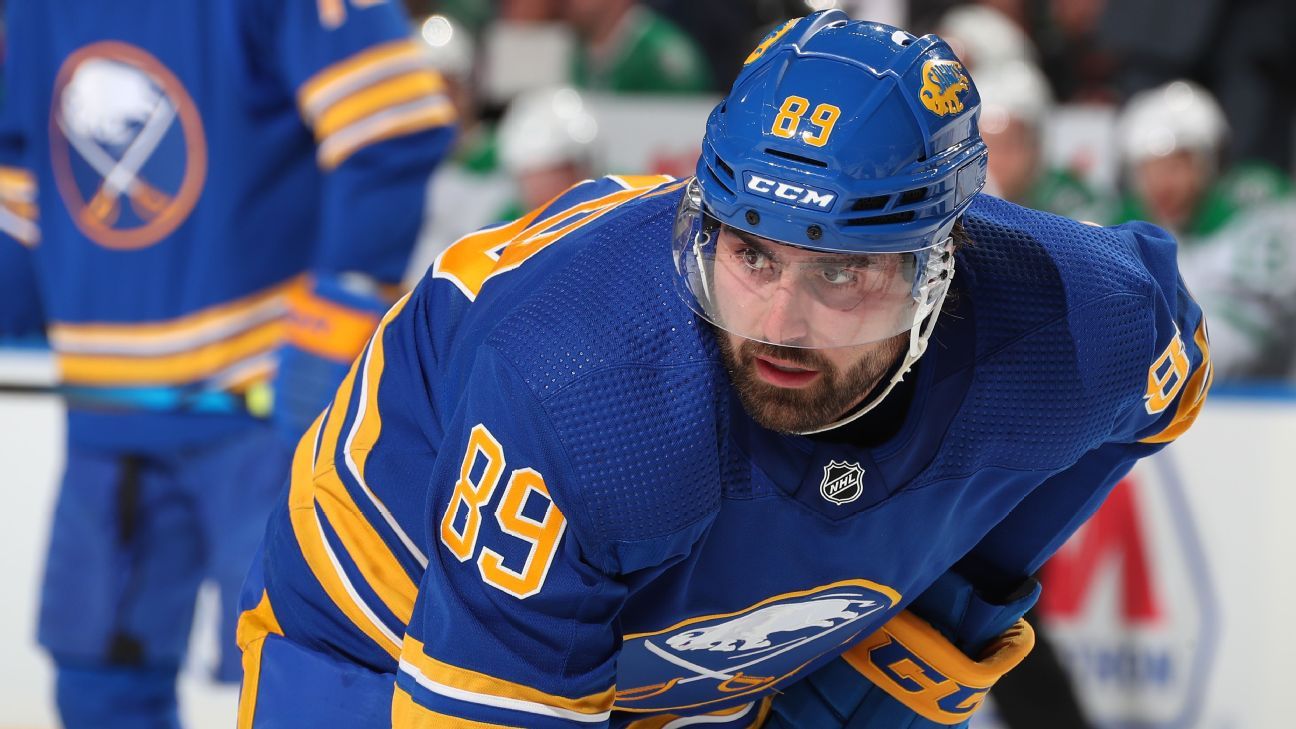 The 2022 NHL All-Star Weekend has come and gone. Now the real work begins. Every team’s schedule is jam-packed to the finish of this regular season, and there’s no room for those who are just coming along for the ride.

You already know who the superstars will be across the league. This week, we’re looking around for the biggest helpers, highlighting one player who’s maybe a little under the radar, maybe recovering from a slow start, maybe in need of an opportunity — and is now poised to make a second-half push.

Youthful energy has been at the core of Anaheim’s success this season (hello, Troy Terry and Trevor Zegras). It’s about time Sonny Milano got more involved. He called for that instant-classic Michigan pass from Zegras, but then missed time with an injury. When Milano is back healthy and up to speed, watch him start to soar.

It was a slow start for Galchenyuk in the desert. But he might be ready to pick things up. A move to the Coyotes’ top line prior to the All-Star break helped the winger produce two goals (his first markers of the season) in as many games. Could it be a sign of good things to come? Arizona can only hope.

Goalie tandems must stick together, that’s the rule. Now that Tuukka Rask‘s return in Boston has hit some snags (between a 2-2-0 record and recent injury), Ullmark and Swayman are back on the hot seat with a potentially wild road ahead. The Atlantic Division is top-heavy with talented teams and great goaltending, which Ullmark and Swayman will have to match.

The Sabres could use a feel-good story, and Tuch is poised to provide it. The local boy looks ready to make good, averaging a point per game in his limited tenure with the team so far, and he’s saying all the right things about what he wants to provide in Buffalo. Bring it on.

The Flames are at their best playing a suffocating sort of defense complemented by a potent offensive attack. Down the stretch, can Tanev help Calgary do both? He’s not only coming off the first four-point night of his career, but Tanev is a reliable blueliner who sets the tone and keeps the Flames focused on their strengths.

Carolina’s rookie center came into the league like a hurricane before his production tapered off — but Jarvis’ underlying numbers have remained strong. Now he’s adding back in more of that offensive edge, and it’s scary to think how good the Hurricanes could be as Jarvis continues to rise.

The Blackhawks need a spark, they need urgency, and they need offense. Strome can — and should — deliver it all. He’s off to a nice start in 2022, registering 11 points in 13 games going into the All-Star break. If he’s back on Chicago’s top line, Strome can easily take advantage with more positive results.

This season will include 103 exclusive regular-season games across ESPN, ESPN+, Hulu and ABC, and more than 1,000 out-of-market games will be available on ESPN+.
• How to watch
• Subscribe to ESPN+
• Stream the NHL on ESPN

There’s a lot of great individual seasons happening in Colorado; Nichushkin’s should continue being one of them. The winger has been perched on the Avs’ top line and is only getting better because of it, which should lead right into a potentially massive second half in which Colorado dukes it out for a Presidents’ Trophy.

Columbus’ blue line already had a roller-coaster start to the season. Now, Jake Bean is out for the foreseeable future and the Blue Jackets will need someone to step up. Enter Gavin Bayreuther. What better opportunity for the 27-year-old to show he can handle increased responsibility than right now?

This one might be wishful thinking, but Dallas sure needs Kiviranta to catch fire. The Stars struggle for depth scoring in the best of times, and Kiviranta has all the tools to help in that area. And he just scored his first goal of the season ahead of the All-Star break. Refreshed, recharged — and ready for more? Kiviranta’s emergence would be huge in Big D.

Has anyone been so snake-bitten to start this season as Filip Zadina? It’s questionable. What’s not is how Zadina has finally been getting in a rhythm, and the points have started piling up. If the 22-year-old can continue surging, there’s no telling how much impact he’ll have on Detroit’s attack up front.

Pucks haven’t been going in for Yamamoto. Perhaps that’s about to change. In the wake of Edmonton’s acquisition of Evander Kane, Yamamoto has been promoted to a line with Connor McDavid and Kane. The early returns were good, and Yamamoto’s best hockey has come previously when he’s paired with a top center. Looks like it could happen again.

If Marchment picks up where he left off before the All-Star break, the rest of the league best take note. Marchment packed six goals and 12 points into those last five games, and there’s no reason to suspect he’ll slow down. That’s revelatory for Florida, which is already one of the NHL’s deepest squads.

The first part of Durzi’s season was about growing up. The second half could be all about showing out. The young defenseman is coming into his own, playing consistent minutes, contributing on special teams and getting involved as a playmaker. Durzi’s next chapter should be a good one.

By all indications, Gaudreau is peaking at the right time. He has been playing well on Minnesota’s second line and showing how valuable a consistent role — and subsequent output — can be. That has been the knock on Gaudreau this season: too many dry spells. But heading into the next half on a high note cures that.

Hosts Linda Cohn and Emily Kaplan bring their hockey expertise and passion for the sport, discussing the latest news around the league as well as interviewing the biggest names both on and off the ice. Listen here »

In Montreal’s perfect world, the answer here would be Carey Price or Cole Caufield. As it is, Pitlick could turn a chip on his shoulder into a beacon of light down the stretch. Pitlick didn’t appreciate Minnesota placing him on waivers last month, and he’s been solid for a bad Canadiens team since. Who’s to say that can’t go on, and even improve, with time?

Let’s talk about a blossoming piece of Nashville’s blue line. Fabbro has dealt with injuries this season, but since coming back, the 23-year-old is showing off a strong defensive game to help anchor the Predators. The more he can give there, the better for Nashville — which faces a tough battle in the talented Central Division.

The Islanders are finally getting Pulock back after a long injury absence. To play the style New York likes, Pulock’s presence is — and will be — crucial. Whether Pulock goes right back to patrolling beside Adam Pelech or if he bounces around to lift other lagging D-man, Pulock has been a rock for the Islanders, and there’s little doubt he will be again.

It feels like Lafreniere is finally moving in the right direction. He was promoted to New York’s top line and potted a couple of goals before the All-Star break, and the winger has looked more confident because of it. With momentum on his side, the sky’s the limit to how far Lafreniere can expand in the coming months.

If anyone is poised for a comeback, it’s Brown. The winger was sidelined with a broken jaw but returned this week to Canada’s capital looking to recapture the best part of his good start. Brown’s so versatile and consistent — assets the Senators sorely need — that what lies ahead for him is bound to be positive.

There have been plenty of disappointments in Philadelphia’s first half. Laughton wasn’t one of them, and he’s bound to stay the course. The Flyers use Laughton everywhere, and lately he’s been padding the score sheet more, too. Laughton’s continued good play is one thing on which Philadelphia can rely.

If there’s a wild card in the Penguins’ offense, it’s probably Kapanen. You never know when he’s going to flip the switch. After Kapanen saw his production stall and he was demoted to the fourth line last month, there was ample incentive for him to rebound. Historically, a little coach’s challenge has helped Kapanen respond. Why not again now?

Little attention has been paid to Barabanov. There’s still time, though. The Sharks winger went into the All-Star break seeing time on the team’s top line and was a consistent threat, nabbing 23 points in 38 games. Barabanov is all about making the most of his chances, and what’s to come in the next few weeks could be a great one.

No goaltender has been more maligned this season than Grubauer. He looks poised now to issue a rebuttal. Following a brutal start in Seattle, Grubauer won five of seven games going into the All-Star break, including his first shutout of the season. It would mean everything for the Kraken to have Grubauer be their second-half MVP and set a good tone for the league’s 32nd franchise.

Granted, Thomas had a nice first half. What the Blues really need (and look poised to get) is more from their center. Thomas is surrounded with top-end talent — including Jordan Kyrou and Vladimir Tarasenko — so his own skill set can get lost in the shuffle. But he can break through on his own, and St. Louis would love to see it.

Just making the lay-up here because Kucherov has been out so much, we’ve barely seen him play thus far — and it’s the correct answer to the question, and I enjoy being right.

Playing on a line with Auston Matthews is a dream for most wingers. Bunting is taking particular advantage. He’s headed into this season’s next phase on a heater, and with the chemistry he and Matthews continue to show, Bunting’s offensive game projects to get even more potent.

If there is any semblance of a big season left in Pettersson, now is when we’ll see it. The Canucks center had a decent January, and even if Vancouver doesn’t make the playoffs, it would be a boon for Pettersson to salvage a strong second half for the sake of his confidence.

Shooting my shot now: Jack Eichel has been cleared for contact, and once he’s rolling, the former Sabres captain will be tough to stop.

Along the same lines as Kucherov, Backstrom is a star player who has been hampered by injury and illness to date. That’s all about to change, though. When Backstrom is back at 100%, what he brings as Washington moves toward the spring is invaluable.

Making the postseason is likely a pipe dream now for Winnipeg, especially with Nikolaj Ehlers on long-term injured reserve. Still, the Jets won’t go quietly, and Schmidt is having a fine season on the blue line that could really pop with added incentive to lock things down and give Winnipeg a fighting chance in the second-half scramble.