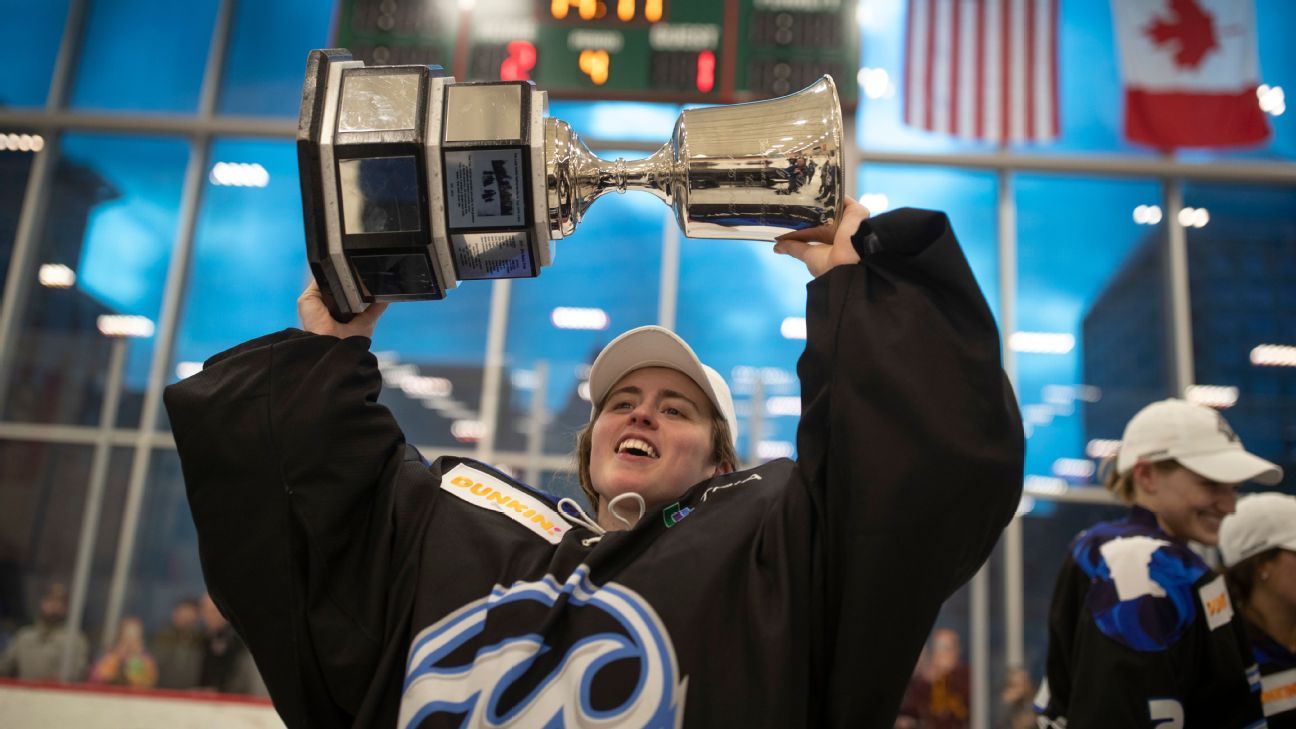 The Premier Hockey Federation’s 2022 Isobel Cup Playoffs are headed to Florida in March, marking the first time the women’s hockey league will play its championship game outside of its franchise markets.

The Isobel Cup Playoffs are scheduled for March 25-28 at AdventHealth Center Ice in Wesley Chapel, Florida. It’s the largest ice sports facility in the southeastern U.S., housing events like the 2017 Four Nations Cup and the 2021 NHL Prospect Showcase.

All six PHF teams will travel to Florida for the three-day tournament. The four lowest playoff seeds will play in a preliminary round on Friday, March 25, with the winners seeded to play the first- and second-highest seeds on Sunday, March 27. All of those games are on ESPN+, which is the exclusive home in the U.S. for the PHF regular season.

The championship game for the Isobel Cup is scheduled for Monday, March 28 at 9 p.m. ET and will be shown on ESPN2 — the network’s first linear broadcast of a professional women’s hockey game.

PHF Commissioner Tyler Tumminia said the idea of a “neutral site” Isobel Cup started in 2021. What was then known as the National Women’s Hockey League attempted to stage its season in Lake Placid due to concerns over the COVID-19 pandemic. That experiment failed due to multiple outbreaks on teams, and the playoffs were eventually completed in March at Boston’s Warrior Arena, the Boston Bruins‘ practice rink. The Boston Pride won the Cup for the second time.

“I really felt passionate about it. Not only for the competitive advantage of equalizing the playing field for all the teams, but I really feel like the playoffs should be a special event. Having a destination with the playoffs really gives the athletes that extra drive,” said Tumminia. “And I’m sure they’re not going to complain coming out of the cold. I know I’m not.”

Tumminia acknowledged that bringing the PHF playoffs to Florida “is not cheap,” but that it’s “definitely something the Board of Governors and I believe in doing to create excitement about the playoffs.”

The league had been in talks with the NHL’s Florida Panthers for some time but couldn’t make the timing work out. “Since our mindset was already there in Florida, we were talking with a lot of others,” said Tumminia.

The PHF had done a sponsorship partnership with “HerStory: A Virtual Women’s Sports Museum” during their Lake Placid playoffs last year. That interactive museum, which includes information about the 2018 Olympic women’s gold medal team that trained there, is housed at AdventHealth Center Ice. Gordie Zimmerman, the facility’s CEO, worked with the PHF to bring the playoffs to Florida.

“Hosting USA Hockey’s Women’s Nationals every Spring has helped lead to an exponential increase in the number of female players we now have in our leagues and in the sport as a whole. We expect the PHF championship to only further that excitement and participation,” said Zimmerman.

Tumminia said the PHF is in talks with the Lightning about having the Isobel Cup-winning team appear at their game at home against the Carolina Hurricanes on March 29.