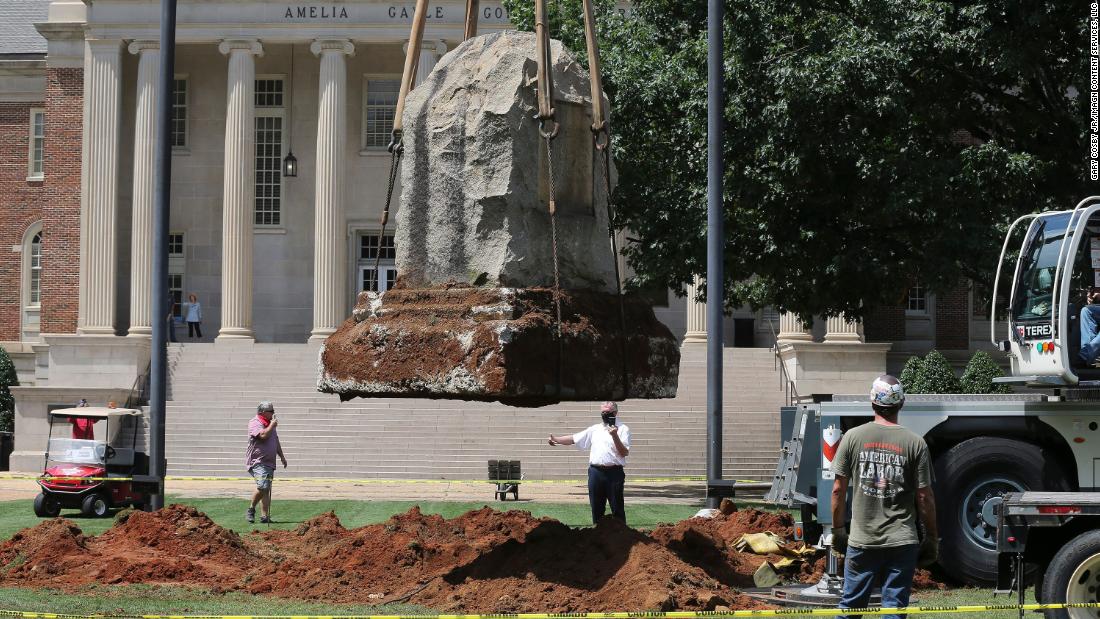 State Sen. Gerald Allen introduced the bills Tuesday. Under one of the proposed bills, the fine for removing a monument would increase from a flat fee of $25,000 to $5,000 for each day a monument isn’t restored.

These bills come at a time when Americans continue to debate whether Confederate monuments should remain or be taken down across the country.

About 73 Confederate monuments were removed or renamed in 2021 and there are now 723 left in the United States, according to a Southern Poverty Law Center report released last week. There are also an additional 741 roadways, 201 schools, 51 buildings, 38 parks and 22 holidays honoring the Confederacy. According to the SPLC, there are about 156 Confederate symbols throughout Alabama.

The Senate Governmental Affairs Committee’s move Tuesday puts the bills in line for a vote by the Senate.

Jerome Dees, the Southern Poverty Law Center’s Alabama policy director, told CNN he believes the proposed bills are part of a broader movement across the South to “preserve the Confederacy” and oppression that the monuments represent.

“The legislation that we’re seeing are just reiterations of old Jim Crow oppression that works to continue that same psychological and mental pressure,” he said.

What the bills would mean

One of the bills would make it a Class C felony to mark or damage a monument or a Class B felony if damage is done during a “riot, aggravated riot or unlawful assembly.” The Class C felony carries a prison sentence of up to 10 years and the Class B felony could lead up to 20 years behind bars.

The other bill requires governments that demolish a historic building to make certain that the building or park that replaces it keeps the same name.

Dees said he believes the proposed bills are “wrong” from both a moral standpoint and a good governance standpoint.

“These are oppressive pieces of legislation that work to enshrine the Confederacy further, and also work to strip agency from local citizens and elected officials who just want to have a say in what their cities and their communities truly mean,” Dees said.

Alabama is one of the six states that have preservation laws. In an attempt to amend the Alabama Memorial Preservation Act, which forbids the “relocation, removal, alteration, renaming, or other disturbance of any monument located on public property” for 40 years or more, the bill would also raise the fine from $25,000 to $5,000 per day. It would additionally empower the attorney general to sue any government found in violation.

Even with the $25,000 fine, several Alabama cities have removed Confederate monuments since the law was passed in 2017.

Last October, the city of Montgomery renamed a street named after Confederate President Jefferson Davis and changed it to Fred D. Gray Avenue to honor the civil rights activist and attorney who represented Rosa Parks and the Rev. Martin Luther King Jr. The city must pay the fine or may face a lawsuit. In 2020, the city of Birmingham was fined for placing a plywood barrier around the Confederate Soldiers and Sailors Monument in Linn Park. That same year the city of Huntsville received a fine for removing a Confederate statue from the outside the Madison County courthouse.

A Confederate statue in Tuskegee has also been a target of community resistance for years and is now at the center of an upcoming lawsuit.

“The statue shall include a protective barrier and pedestal base and shall be placed near the southeastern entrance to the Edmund Pettus Bridge,” the bill text says.

Dees told CNN the SPLC’s hope is that the Alabama legislature hears the voices of individuals from the local community who have spoken against the Confederacy.