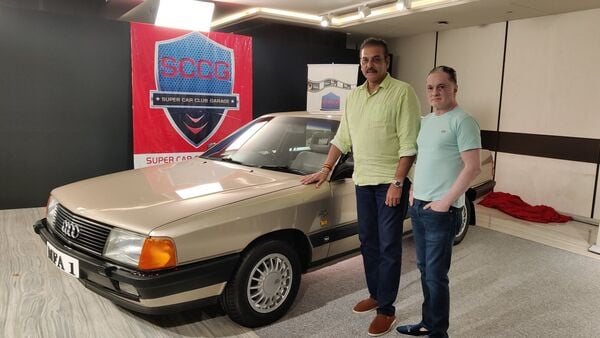 Ravi Shastri won the Audi 100 in 1985 after beating Pakistan in the summit clash of the tournament by eight wickets at the Melbourne Cricket Ground (MCG).

Ravi Shastri, the highly successful Indian cricketer and coach to the Indian cricket team, won the iconic Audi 100 in 1985 after beating Pakistan in the summit clash of the tournament by eight wickets at the Melbourne Cricket Ground (MCG). The same car has now been restored by Super Car Club Garage and the keys to the car were recently handed over to Shastri by Gautam Hari Singhania, Chairman and MD, Raymond Group at JK House in Mumbai.

Shastri went on to declare the car a ‘national asset’ and took to Twitter to share his excitement. “This is as nostalgic as it can get! This is a national asset. This is #TeamIndia’s @AudiIN @SinghaniaGautam,” tweeted Ravi Shastri.

Audi 100 stands as one of the most successful products by the company of the bygone era. It entered the production in 1968 and remained on the assembly line until 1994. It was ‘the Audi’ most commonly found with most celebrities around the 1980s and 1990s.

While it is unconfirmed, some say that this specific car was the first Audi to ever land in India. Shastri’s Audi was the third-gen Audi100 which went on sale internationally around 1982. A rear-wheel-drive car that was designed with aerodynamics in mind and offered a drag coefficient of only 0.30. Over the next few years, the new nomenclature swapped the Audi 100 with the Audi A6 which currently sells across the world, including India.