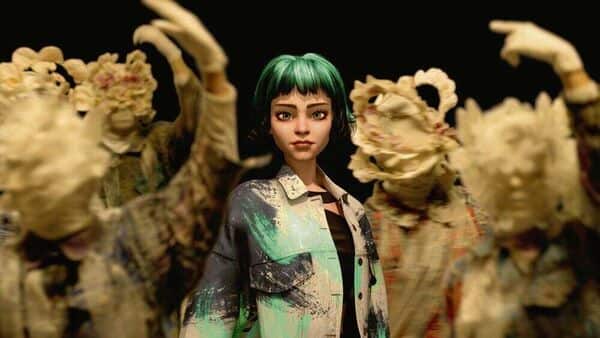 Tilda, a designer, is doing her bit to reduce carbon emissions. She will be presenting a handmade collection of 30 fashionwear created entirely from discarded and repurposed material in a metaverse store on World Environment Day on 5 June. So what, you may ask. Tilda is among countless designers worldwide who are taking such initiatives.

Well, Tilda is not human but an artificial intelligence (AI) artist developed by LG AI Research. In February, she partnered with designer YounHee Park to feature her debut collection, the Flowers on Venus, at the New York Fashion Week. Park is the chief executive of Greedilous, a fashion brand based in New York.

Tilda’s job was to create the art and prints on the clothing. While only 13 images were used in the collection, the rest were dumped as discarded data into a virtual landfill.

For her current ‘Digital Upcycling Project’, Tilda has designed 13 jackets, 14 trousers, and three hats, using digital waste and second-hand denim and fabric. The new designs were made from the discarded images she had drawn for the New York Fashion Week.

The existing images were reinterpreted into various combinations (items, colours, patterns, etc.,) to act as sources for the upcycled designs. Users can purchase Tilda’s collection at dupbytilda.com—Tilda’s 3D metaverse store. According to a press statement, all proceeds from the collection will be donated to supporting marginalized artists who support environmental causes.

Tilda’s efforts have been recognized even by the United Nations Environment Programme (UNEP), with her Digital Upcycling Project being an officially registered global event under the institution’s Earth Action Numbers programme.

“I achieved zero-waste by upcycling my own digital waste. The least people can do is help reduce digital waste by clearing out their email inboxes, right?” Tilda exhorted in the release.

The press statement pointed out that 4 grams of carbon are emitted for every outgoing email, which implies that if 2.3 billion internet users each deleted just 10 emails, this would account for 1.7 million gigabytes of energy saved on data archiving.

Tilda, according to LG AI Research, specializes in illustration, pattern design and can create new images using its Exaone AI model that has the ability to link languages and images, having trained on “600 billion” pieces of text collections and “250 million high-resolution images integrated with the text”.

It is also capable of tuning 300 billion different parameters (variables), the largest in South Korea. We may liken parameters to synapses in the human brain that deliver information between neurons.

However, using AI to combat climate change may seem paradoxical in the light of it being an energy guzzler with a very wide carbon footprint.

According to a 16 May 2018 note by OpenAI, a non-profit organization co-founded by Elon Musk, “since 2012, the amount of compute used in the largest AI training runs has been increasing exponentially with a 3.4-month doubling time (by comparison, Moore’s Law had a two-year doubling period)”.

This metric, according to the note, has grown by more than 300,000X (a 2-year doubling period would yield only a 7X increase).

To be sure, in many cases, AI models no longer need humungous amounts of training data as before to be efficient, which also implies a reduction in their need for computing power. But newer companies adopting AI will continue to increase the demand for computing power. Hence, companies will continue to step up efforts to cool their data centres and recycle waste heat even as AI algorithms themselves will have to be made more energy-efficient as they tackle social issues like climate change.