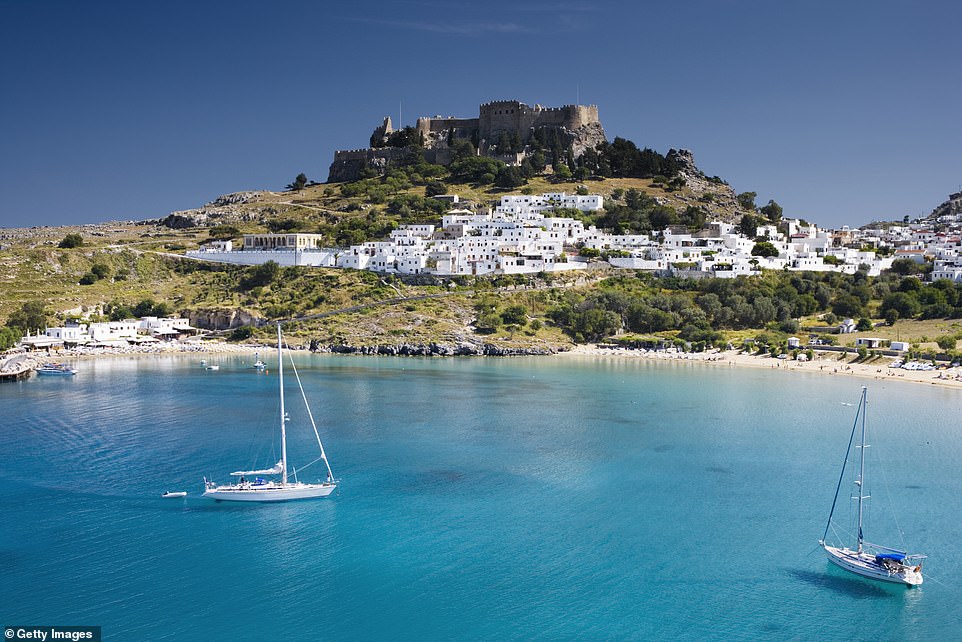 When Gerald Durrell’s brother, Lawrence, was posted to Rhodes at the end of World War II, he discovered a new word for an unheard of condition: Islomania.

He wrote about it in his book based on his time there. It refers to people who find islands irresistible.

Islomanes are in for a (small) universe of pleasure here, and should make their way to Lindos, on the south-east of the island.

Preserved: Kate Johnson explores the ‘higgledy piggledy’ streets of Lindos (pictured), a picturesque town on the south-east of Rhodes island 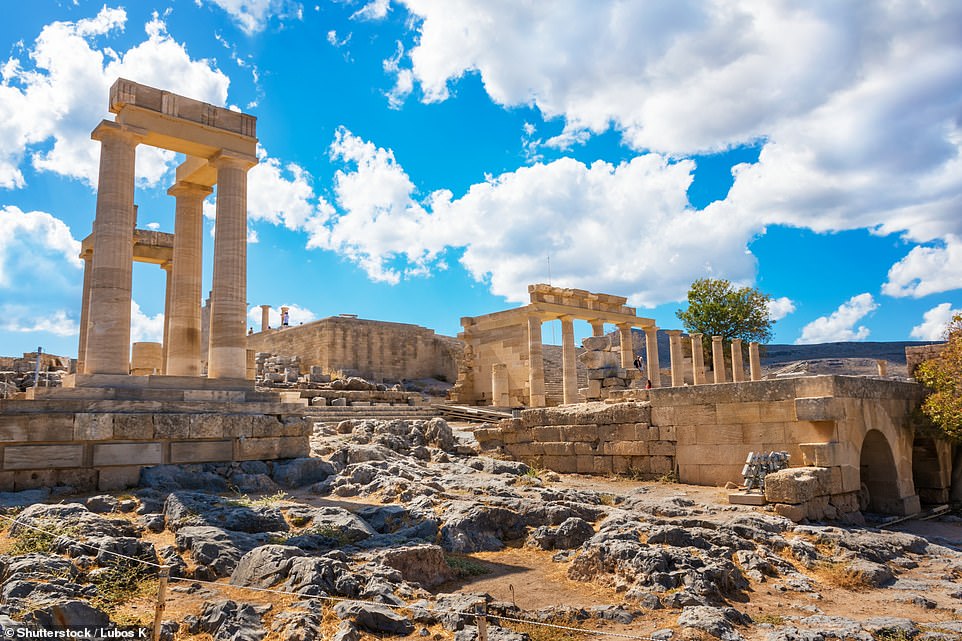 The ruins at the imposing Acropolis in Lindos, where Kate discovers ancient temple ruins, elegant columns and views of Turkey

The village itself is guarded by the imposing Acropolis, a natural citadel fortified from the 6th century BC onwards. If you can handle the climb (you’ll be giving the dear little donkeys a well-earned rest), there are ancient temple ruins, elegant columns and views to Turkey. Below are the classic, whitewashed, flat-roofed houses, all built centuries ago.

Lindos is officially preserved from any attempts to overdevelop it, and the pedestrianised centre is too narrow for cars anyway.

It’s higgledy piggledy for a reason; the routes were designed to confuse any incoming pirates, as Lindos was a major port and naval centre as well as a tiny fishing village. 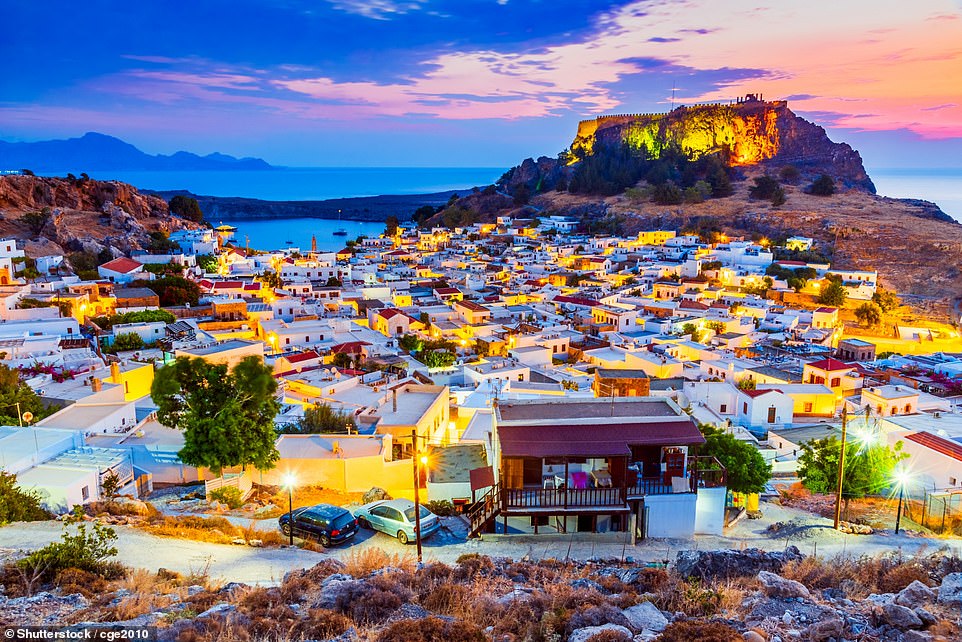 Above is a view of Lindos’s ‘classic, whitewashed, flat-roofed houses, all built centuries ago’ 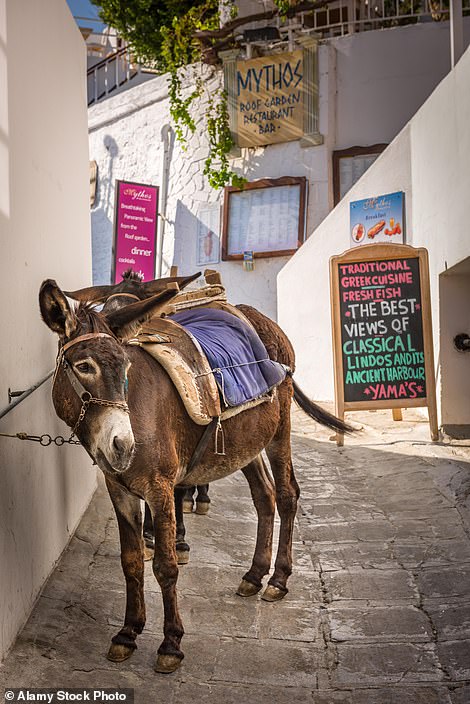 If you can handle the climb to the top of Lindos, you’ll be giving the dear little donkeys in the town a well-earned rest, says Kate

It’s so welcoming and deservedly popular, the streets are busy but not frantic, and made for meandering.

The shops sell all that you’d expect — souvenirs, floaty sundresses (I tried this look, in white, and my boyfriend asked if I was getting baptised), silver jewellery, ice cream parlours and plenty of relaxed tavernas. Choose one with rooftop tables to better stare at the magical harbour as night falls.

I’m staying nearby, at the Lindos Grand Resort & Spa, a new hotel on Vlycha Bay that finally opened last summer. It’s a collection of minimalist white buildings, each no more than two floors high, spread over the expansive grounds and raked like cinema seats into the hillside.

The Lindos Grand is vast, and more than half of the rooms have an L-shaped private swim-up pool (I’m in one of them).

It means there’s plenty of space, everywhere, and there’s no need for that strangely enjoyable pre-breakfast reservation of sun loungers around the truly glorious infinity pool.

With such deluxe privacy, it’s easy to spend a day in blissful solitude (with only mild envy of the poolside umbrellas for shade, as there are none provided for the room terraces).

The resort is adults only — and I see all ages from twentysomethings to grey-haired couples enjoying the informality. This is a modern and sumptuous place, the spa and restaurants (including fine dining on the roof top) are lavish and generous, and you are left to your own devices (there are no staff trying to clean your sunglasses when you take a dip, thankfully). 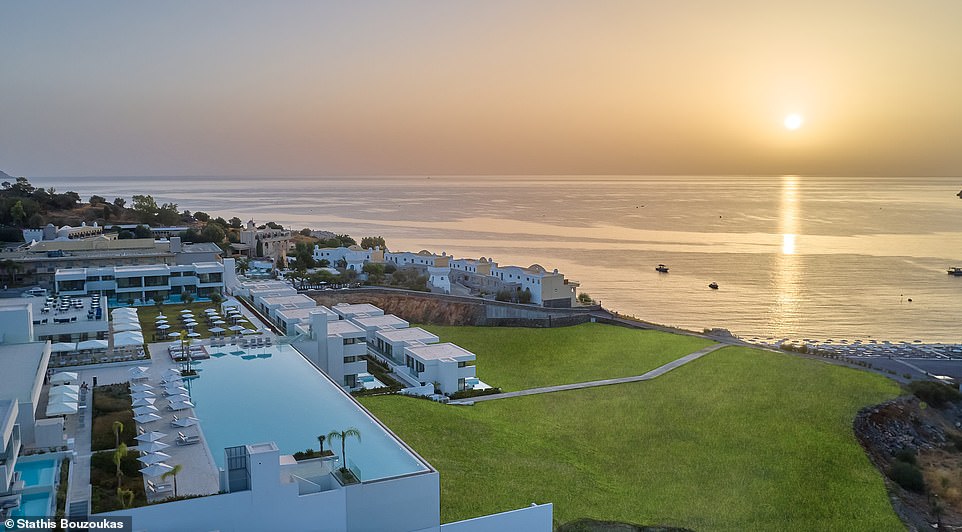 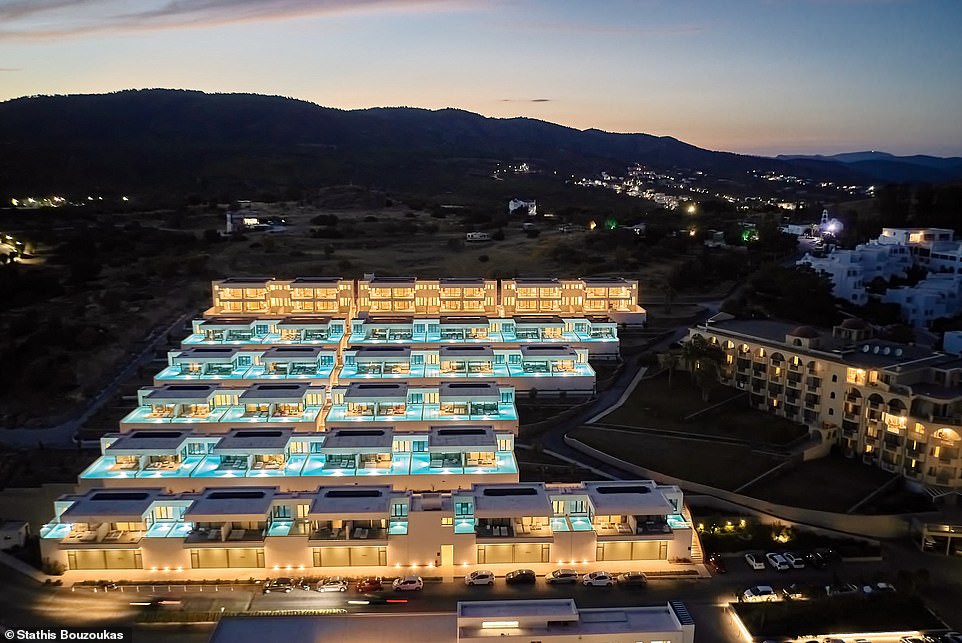 At the adults-only Lindos Grand (pictured), Kate sees guests of all ages from ‘twentysomethings to grey-haired couples enjoying the informality’ 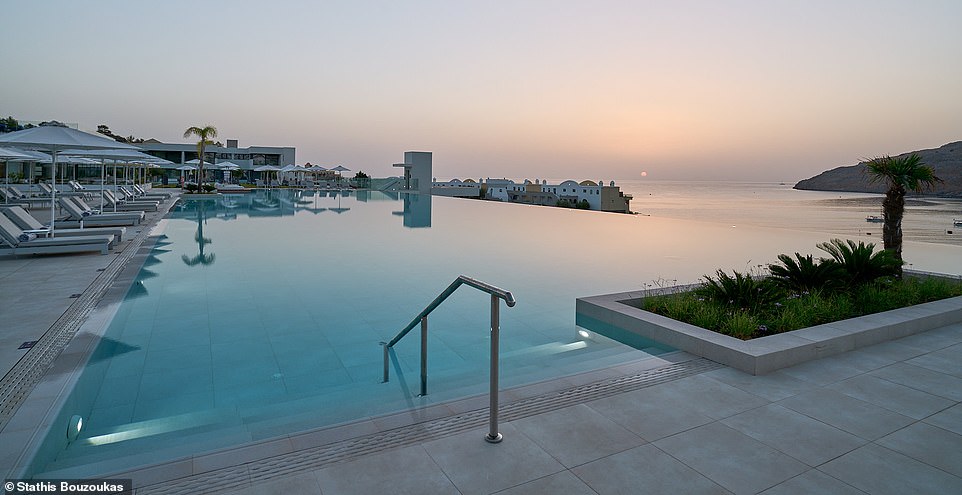 ‘With such deluxe privacy, it’s easy to spend a day in blissful solitude,’ says Kate of the Lindos Grand 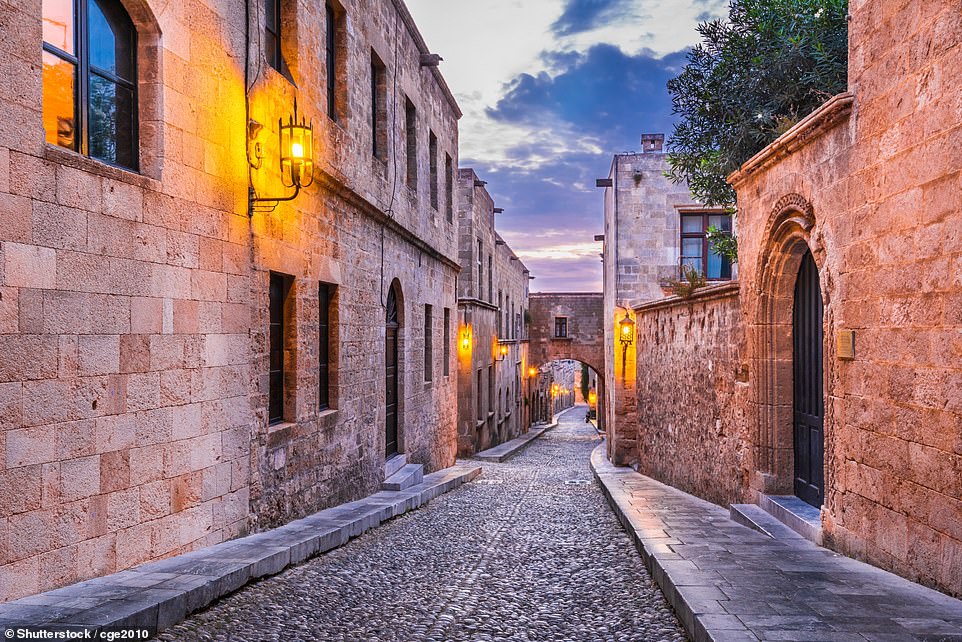 Above is the ‘imposing’ Street of the Knights of Rhodes, which Kate visits on an outing arranged by her hotel 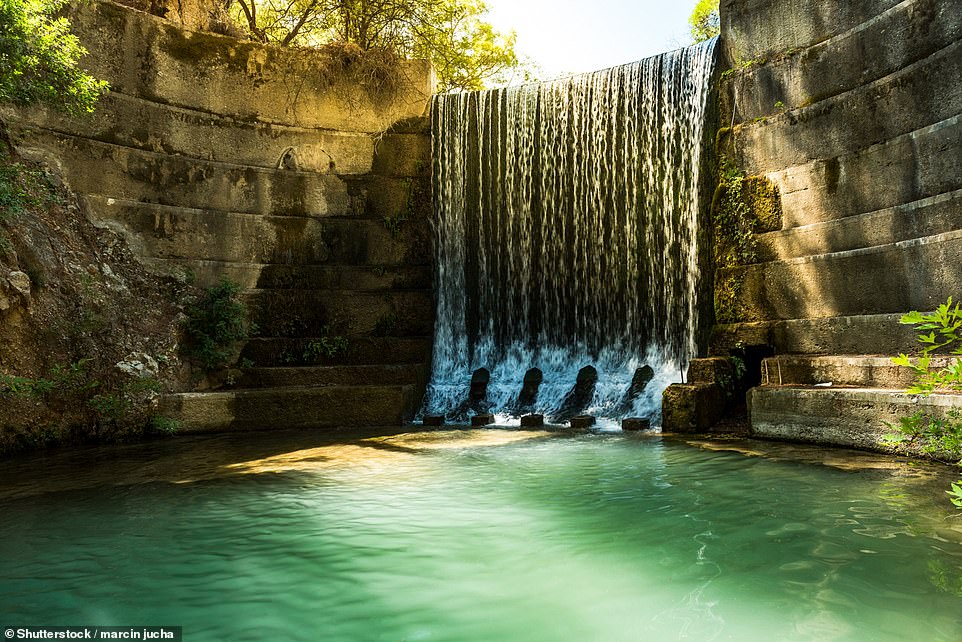 Visit the Seven Springs in Rhodes and you’ll find a freshwater lake and small waterfall (pictured), all within a deep forest

The beach is a minute’s stroll through the rolling garden and open to all as there are no private beaches in Greece (they are counted as a ‘public good’). As ever, the sea is the star: glittering, clear, warm and enticing.

The hotel arranges outings, and to briefly break the seclusion I visit Rhodes old town and the Seven Springs.

The town is a wonder, with towering medieval walls built by the Knights of St John in the early 14th century. It’s miraculously well maintained with minimal intervention into its original structures, from the 200 intriguing alleyways — plenty with no names — to the imposing Street of the Knights.

The Seven Springs by contrast is deep in nature. Free to enter, the springs lead to a freshwater lake and small waterfall, all within a deep forest.

The tunnel, built by the Italians in 1931, is nearly 650ft long, narrow, dark, not high (it knocked the sunglasses off the top of my head), and as it leads the water to the lake, the walk is through ankle-deep running water.

It’s said that if you pass through this tunnel, you will not only become younger but also be forgiven of all your sins.

Another reason why Rhodes will make islomanes of us all.