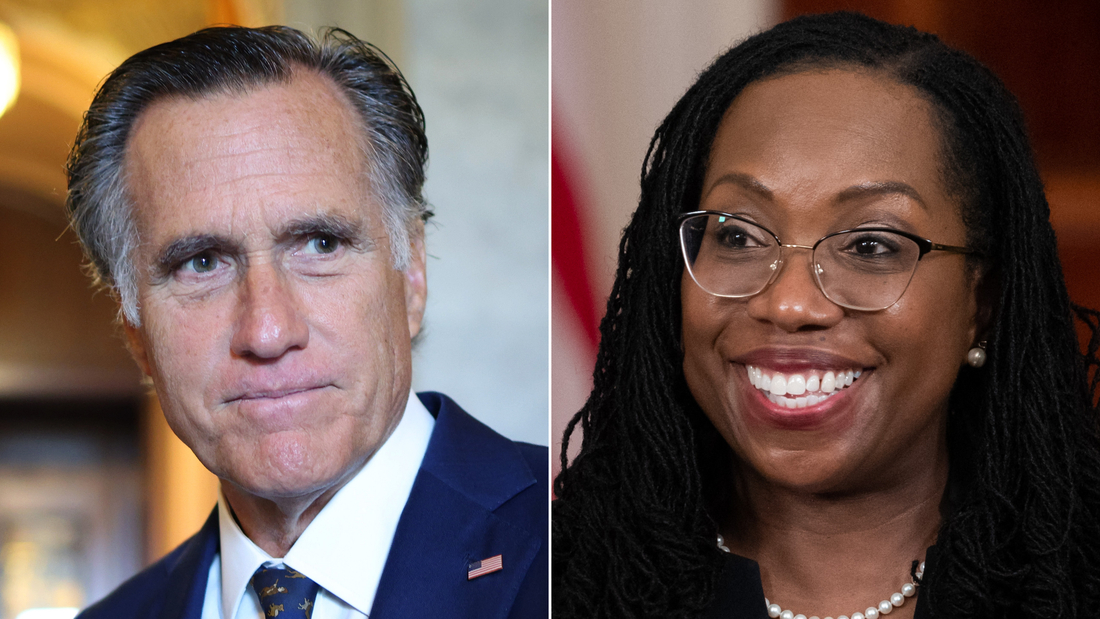 “I’ll complete that analysis and then reach a decision, but I’ve not reached my decision,” Romney told CNN’s Chief National Affairs Analyst Kasie Hunt when asked about how he plans to vote. The comments were made as part of an exclusive interview for CNN+’s “The Source with Kasie Hunt,” which airs daily at 4 p.m. ET, starting on Tuesday.

Senate Democrats can confirm Jackson to the Supreme Court without Republican support if every member of their caucus votes in favor, which appears on track to happen, and Vice President Kamala Harris breaks a tie. It is not yet clear if Jackson will win any Republican votes. If Democrats can win GOP support, they will be able to tout the confirmation as a bipartisan victory.

“I have begun a deeper dive, a much deeper dive than I had during the prior evaluation,” Romney said, adding, “in this case, as well, she’s gone into much more depth talking about her judicial philosophy that she had before. And we’re, of course, looking at her judicial record, as a district judge and as an appellate judge, in far more depth than we had before.”

Democrats emphasized the historic nature of Jackson’s nomination during her confirmation hearings, pointing out that she would be the first Black woman to serve as a Supreme Court justice. Democrats have also argued that the depth and breadth of her experience would add a valuable and unique perspective to the high court.

A number of Republicans, on the other hand, have expressed criticism and concern over Jackson’s record, including arguing that she is soft on crime and has been too lenient in sentencing child pornography cases, charges the nominee and Democrats disputed.

Asked about the tone and tenor of the hearings and how Republicans questioned Jackson, Romney told Hunt, “Some colleagues on my side of the aisle, I thought, asked respectful questions, and were able to elicit responses from her that I think were very helpful to those that are making an evaluation.”

But he said critically, “I thought some were preparing for their presidential campaign. And were, if you will, doing the things you have to do to get on TV, which I think is unfortunate.”

Romney went on to say, “I think any setting like this, that doesn’t show respect for the witness, or in this case, the judge, is not the right way for us to go. We should show, in my opinion, more respect for one another. And so sometimes the rhetoric was a little hot. But I think in the final analysis, we’ll each be able to make our decision based upon our personal interviews with Judge Jackson, and with the results that come from these hearings.”

Only three Republican senators voted in favor of Jackson last year when she came before the Senate: Lindsey Graham of South Carolina, Susan Collins of Maine and Lisa Murkowski of Alaska.

Collins and Murkowski are not on the Senate Judiciary Committee and did not have a chance to question the nominee during the hearings.

Graham, who is a member of the Judiciary Committee, directed fierce, and highly critical, questions toward the nominee, and he appeared to signal he will not support her nomination.

So far, however, no Democrats have publicly signaled they would vote against the nominee.

West Virginia Democratic Sen. Joe Manchin, a key moderate and swing vote, announced on Friday that he plans to vote for Jackson, a move that all but guarantees the nomination will be confirmed.