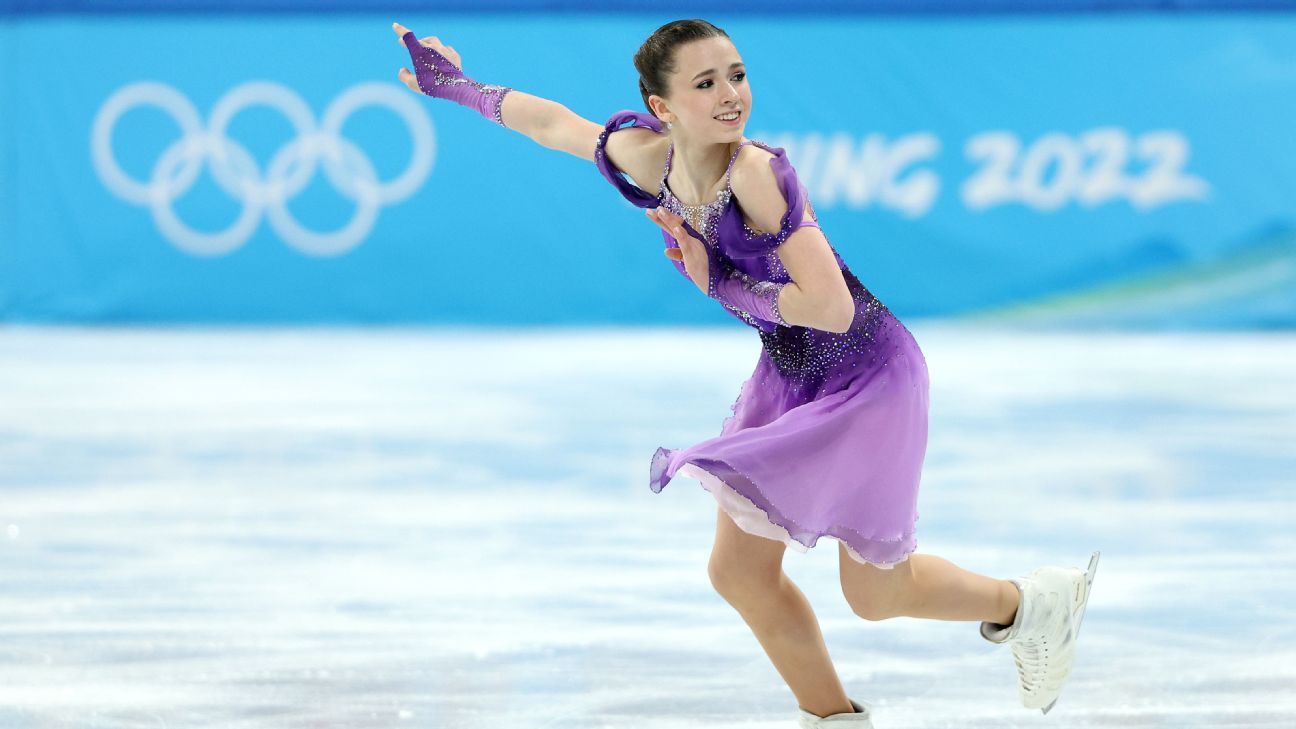 BEIJING — Kamila Valieva, the 15-year-old Russian superstar who was expected to deliver her nation its third straight Olympic gold medal in women’s figure skating, practiced as usual Thursday, hours after reports that she tested positive for a banned substance.

The sample was reportedly obtained before Valieva won the European championship last month in Estonia, a performance that solidified her status as the leader of Russia’s “quad squad” of elite women’s figure skaters headed to Beijing.

It’s unclear if Russia is appealing or fighting the result. Her appearance at practice implies that the federation isn’t accepting any finding that would eliminate her.

“She is not suspended,” Russian figure skating federation spokeswoman Olga Ermolina said, with no further detail.

Valieva ran through her program and skated with teammate Alexandra Trusova while getting pointers from coach Eteri Tutberidze at the practice rink. Valieva flashed a smile to one of her coaches near the end of the roughly 30-minute session, and none of the skaters took questions from reporters.

A positive test could cost Russia the gold medal from the team competition and threaten Valieva’s chance to win the individual competition that starts Tuesday. She is the heavy favorite.

The typically tight-lipped Russian team was even more guarded during the men’s free skate, where Mark Kondratiuk simply said, “No comment,” to a series of questions about the squad and whether he thought Valieva’s case would be resolved. The 18-year-old Kondratiuk performed both men’s programs during the team competition and stands to lose his gold medal.

The drug detected, trimetazidine, is a metabolic agent that helps prevent angina attacks and treats vertigo, according to the European Union’s medicines agency. It is banned by the World Anti-Doping Agency because it can help endurance and increase blood flow efficiency.

The most famous case of trimetazidine in sports doping involved Chinese star swimmer Sun Yang. The three-time Olympic champion served a three-month ban in 2014. Russian bobsledder Nadezhda Sergeeva tested positive for trimetazidine at the 2018 Pyeongchang Olympics. She was disqualified from the two-woman bobsled event and served an eight-month ban.

It is unclear whether Valieva applied for a therapeutic use exemption or has a history of heart problems.

Russian athletes are in Beijing competing as the “Russian Olympic Committee” (ROC), after the country was banned because of a massive state-sponsored doping scheme at the 2014 Sochi Olympics.

The International Olympic Committee and Switzerland-based International Testing Agency, which oversees the Olympic drug testing program, have declined to comment on the case. It is complicated because minors have protection within the World Anti-Doping Code from being identified.

The first indication of a problem with the results of the three-day team competition — which concluded Monday with Russia winning gold, the U.S. silver and Japan bronze — came when the medal ceremony was postponed indefinitely.

IOC spokesman Mark Adams said Wednesday that “legal consultation” was required between the Olympic committee and the International Skating Union. He gave few details, but acknowledged that “we have athletes that have won medals involved.”

If the Russian team is disqualified, the U.S. team would be elevated to the gold medal for the first time in the event. Japan would be awarded silver and fourth-place finisher Canada, the defending champion, would receive the bronze.

If any athlete and team is disqualified or had results nullified, an appeal is likely, which could further delay the medals presentation. The Court of Arbitration for Sport has set up an office in Beijing to hear urgent cases.

Reporters asked the Kremlin about the potential doping issue late Wednesday amid speculation that the gold medals won by Valieva and five other Russian skaters that took part in the team competition could be at risk.

“Let’s, for the sake of understanding, wait for some explanations either from our sports officials or from the IOC,” Kremlin spokesman Dmitry Peskov said.

While the Russian team dominated the competition, Valieva was the star. Along with winning the short program and free skate, she became the first woman to land a quadruple jump in Olympic competition.

Many of the skaters that took part in the team competition, including American star Nathan Chen and Russian’s Mark Kondratiuk, are due to leave Beijing shortly after competing in Thursday’s free skate. It’s unclear if a medal ceremony will be held.

“Everyone is doing absolutely everything that the situation can be resolved as soon as possible,” Adams said, though he cautioned “as you know, legal issues can sometimes drag on.”

Traditional doping is uncommon in figure skating because additional muscle mass is generally a negative. But many skaters have been caught over the years trying to control their weight with diuretics, which are banned for their ability to mask steroid use, and other medications that could give them the slightest edge.

Russian skaters in particular have a history of positive results dating to 2000, when decorated pairs skater Elena Berezhnaya was stripped of a gold medal from the European championships for testing positive for pseudoephedrine.

Three years ago, pairs skater Alexandra Koshevaya was given a two-year ban after testing positive for torasemide, which she claimed to have used for a foot injury. Later that year, ice dancer Anastasia Shakun was given a one-year suspension for taking furosemide after she claimed a pharmacy suggested it for swelling in her eye.

In July 2020, Maria Sotskova was dealt a 10-year ban just months after announcing her retirement for allegedly forging a medical certificate to explain a doping violation. Sotskova finished eighth at the 2018 Olympics in Pyeongchang.