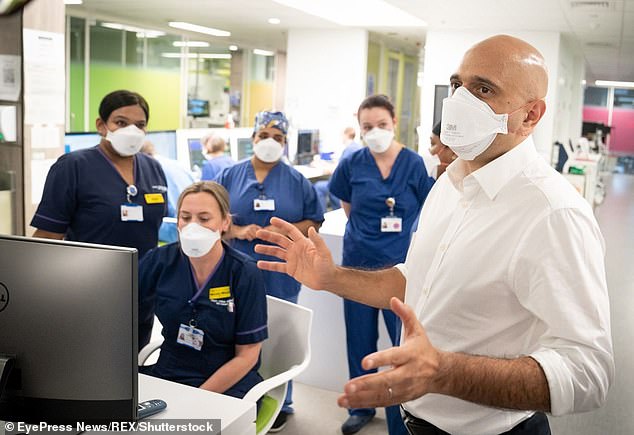 The Health Secretary is planning to set up academy style hospitals to tackle post-pandemic waiting lists.

Under the re-organisation, Sajid Javid will give more freedom to well-run hospitals that manage to treat patients quickly.

But he will come down hard on failing NHS trusts in an attempt to deal with the ‘huge’ variation in performance across the health service.

It would see poorly-run hospitals turned into ‘reform trusts’, The Times reports, similar to the Blairite reforms where schools rated as inadequate were taken over.

And leading NHS managers, or outside sponsors, could also be parachuted in to take charge of chains of hospitals.

The plans are still in their early stages, and are due to be set out in a white paper later this year.

But they raise the prospect of the NHS facing several reforms at once, sparking fears the tweaks could be ‘inconsistent’ with each other.

The shake-up comes on the tail of a new study that suggests employing more health managers or paying them higher salaries does not improve the quality of NHS hospitals.

Health Secretary Sajid Javid with NHS staff at the King’s College hospital in London earlier this month. He told MPs last year he would be ‘watchful for any waste or wokery’ as he awarded the NHS a record funding boost 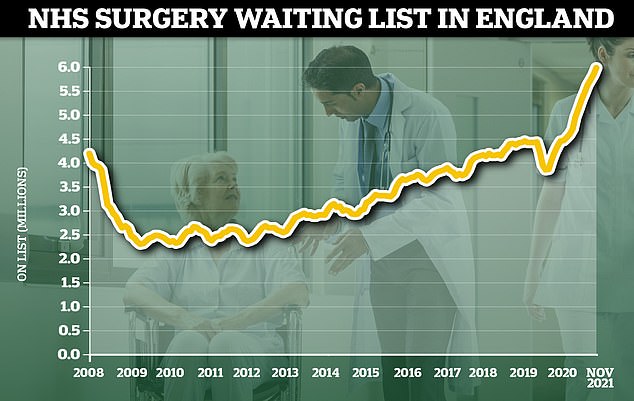 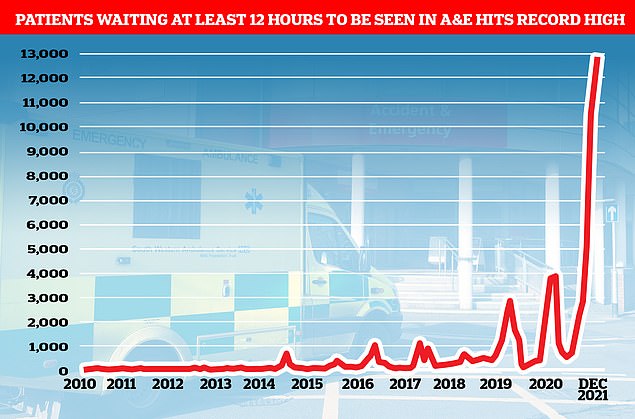 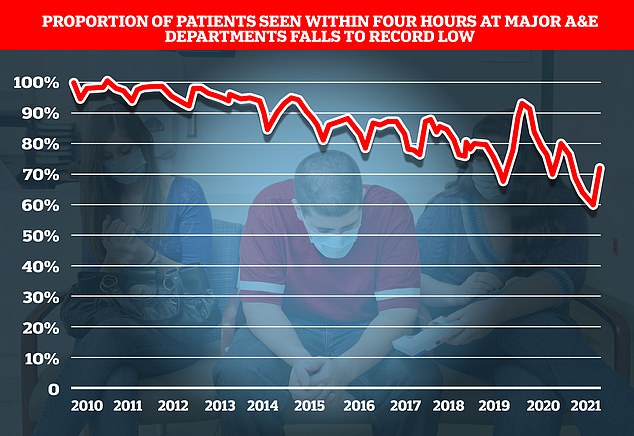 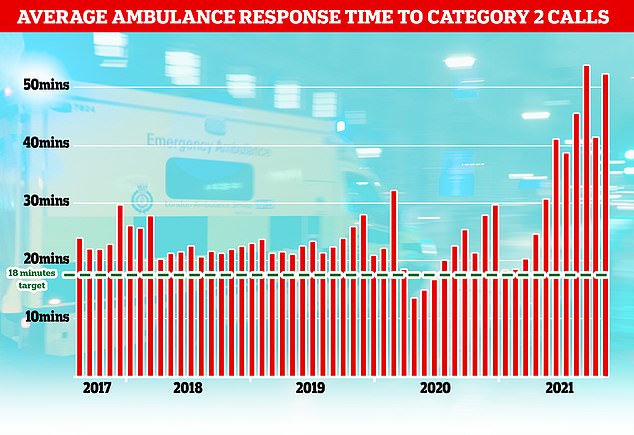 NHS waiting lists have spiralled to a record 6million since the pandemic began, after whole wards were turned over to fighting Covid.

More than 300,000 of these patients have been on the list for over a year — often in pain — waiting for operations such as hip and knee replacements.

And 18,500 have queued for at least two years — seven times more than last summer.

One in NINE people in England now on NHS waiting list

One in nine people in England were on the NHS waiting list for routine operations by the end of November, the latest figures show.

There are also record numbers of cancer and A&E patients waiting dangerously long times to be seen, official figures show.

Experts warned the ‘shocking data’ laid bare the wider impact of Omicron on the health service and highlighted that many patients were being ‘let down’ by the deepening crisis in the NHS.

Statistics published by NHS England today showed a record 6million people were stuck on NHS waiting lists for elective care by the end of November, just as the ultra-transmissible variant began to take off.

More than 300,000 patients had waited over a year — often in pain — for ops such as hip and knee replacements or cataracts surgery.

Of them, 18,500 had queued for at least two years — seven times more than last summer.

At the same time, just two-thirds (67.5 per cent) of cancer patients were given their first treatment within two months of the disease first being detected — the lowest number ever.

Only three-quarters of suspected cancer patients were referred to a specialist within the NHS two-week target, another low.

Cancer charities warned the ‘agonising delays’ were causing ‘huge amounts of distress and anxiety’ for people living with cancer, and warned the waits ‘can risk a worse prognosis’.

Ambulances are now struggling to get to patients in time, prompting some to recommend people suffering heart attacks should make their own way to hospital.

Meanwhile, just two thirds of cancer patients were given their first treatment within two months of the disease being detected — the lowest number ever.

And only three-quarters of suspected cancer patients were referred to a specialist in the NHS within two weeks, another record low.

Boris Johnson is said to be keen to slash waiting times in the NHS as part of ‘operation red meat’, which aims to move the national conversation on from lockdown-busting Downing Street parties.

But allies of Mr Javid said the reforms were already being planned long before the Prime Minister’s current woes.

A Whitehall source told The Times: ‘Sajid’s reform agenda is all about driving up performance across the NHS.

‘To achieve that we are going to apply some lessons from the academies programme.’

There are fears the plans could spark a mis-match with other NHS reforms already heading through parliament.

Last July the Health and Care bill was unveiled, which conversely would give the NHS less freedom because the Department of Health would gain controlling power over it.

Mr Javid has already tried to dump the reform saying there were ‘significant areas of contention’, tabled by his predecessor Matt Hancock, but was overruled by the Prime Minister.

In a separate reform plans are also being laid for more collaboration between hospitals and the care sector.

At present there are many patients in hospitals who are well enough to be discharged, but can’t be because of problems finding beds in the care sector.

Richard Murray, from the health care think-tank the King’s Fund, said: ‘Any further changes must be consistent with [the Health and Care bill] proposals or risk looking incoherent.’

It comes as a study found NHS trusts with highly paid bosses were just as likely to have poor finances, long waiting lists and high death rates as those on a smaller payroll.

Researchers say this is likely to be because NHS managers spend more time on bureaucratic box-ticking than on trying to boost staff performance.

They also have little discretion in how to perform their role unlike leaders in the private sector, London School of Economics (LSE) researchers noted.

Health Secretary Sajid Javid told MPs last year he would be ‘watchful for any waste or wokery’ as he awarded the NHS a record funding boost.

His comments led to speculation there could be a cut in the number of highly-paid managers so more money is available for patient care.

The general, who led the Royal Marines’ invasion of Iraq, has been asked to look at how the NHS can boost efficiency and improve care. 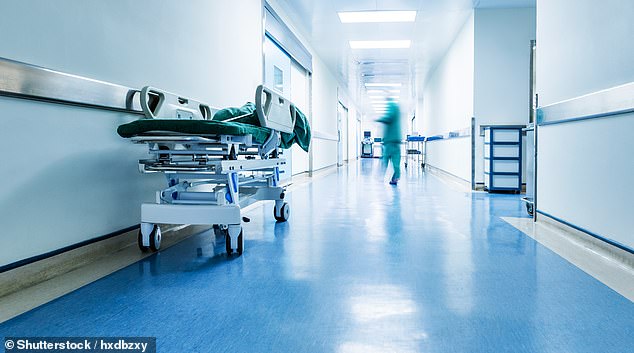 Employing more health managers or paying them higher salaries does not improve the quality of NHS hospitals, a study suggests (file photo used)

The LSE study, published in the Journal of Applied Public Economics, analysed data on 129 hospital trusts between 2012/13 and 2018/19, looking at factors such as financial position, elective and emergency waiting times and deaths.

This was compared to the number of managers each trust employed and the amount spent on them.

The economists said: ‘We find no evidence of an association between our measures of quantity of managerial input and quality of management.

‘Furthermore, we find no associations between our measures of quantity of management input and five measures of hospital performance.’

They added: ‘This holds, irrespective of how we define managerial input, whether by number of managers or expenditure on management.’

Chris Hopson, chief of NHS Providers, which represents health trusts, had said managers with the most challenging roles should be offered similar rewards to those running school academies.

Those leading of large chains have attracted salaries as high as £450,000.

The highest paid hospital chief executives are earning as much as £300,000.