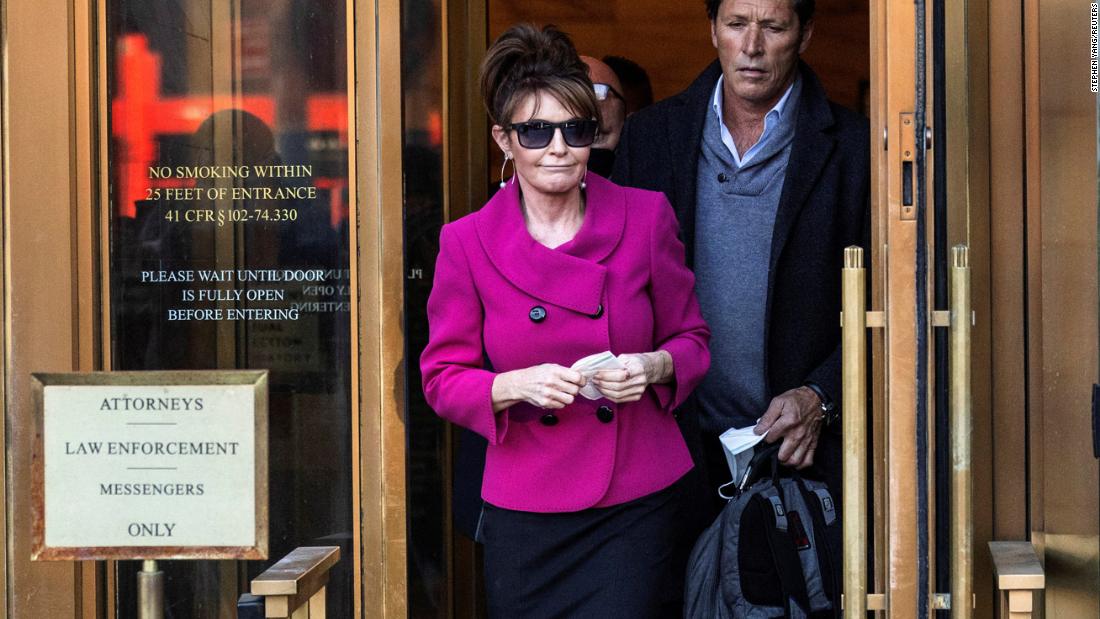 Palin testified for about 15 minutes before court ended for the day. She sued the New York Times and former editorial page editor James Bennet in 2017 over an editorial they published on June 14, 2017 in the wake of a shooting at a baseball practice that injured Rep. Steve Scalise and other members of Congress.

Earlier in the day, Bennet testified he made edits to the paper’s editorial, erroneously adding that there was a “clear” link to a map circulated by Palin’s PAC and the deadly shooting that injured former Congresswoman Gabrielle Giffords in 2011, and that he has regretted them in the five years since the piece was published.

Bennet, who testified over the course of two days, shook his head while his face turned red as the Times’ attorney read the original draft of the editorial, and the edits Bennet made throughout the entire piece.

“I have regretted this pretty much every day since,” Bennet said.

Attorneys also read emails from Bennet’s former colleague Ross Douthat, an opinion columnist at the Times, who wrote to Bennet shortly after the editorial was published, saying “the point is that the map had no link, none at all, to Giffords’ actual (shooting.)”

Bennet, who is no longer an employee at the Times, testified that he did not intend to cause any harm to Palin through his edits. Bennet’s intentions are crucial to the case as Palin’s attorneys must prove to the jury that he published the editorial knowing that it contain factual errors. The standard, known as “actual malice,” is an extremely high bar to meet in defamation cases that involve public figures like Palin.

While Palin’s attorneys have repeatedly said that Bennet did not apologize to the former Alaska Governor for the mistake, an attorney for the Times read from an email Bennet sent with responses to questions about the editorial from CNN Business’ Oliver Darcy, in which Darcy asked if Bennet would apologize to Palin.

“I’m not aware that Sarah Palin has asked for an apology. But, yes, I, James Bennet, do apologize to her for this mistake,” the email said. Bennet testified Wednesday that the apology was never printed, and that he later found out that the Times has a policy against apologizing. He said he did not personally apologize to Palin even after he left the newspaper.

He said he hasn’t apologized because the governor is suing him and the paper and an apology “would look like an effort to get out of a lawsuit.”

In Palin’s brief time on the stand, she mainly delved into her background and briefly touched on her becoming the vice presidential nominee for John McCain when he ran for president in 2008.

Palin testified Wednesday that said she mainly spends her days “holding down the fort in Wasilla” where she raises her youngest son, Trig, 13, who has special needs, focusing on his schooling. She said she has eight grandchildren with another on the way.

“I’m a single mom now,” she said, and said she also cares for her elderly father.

Palin said her work in politics now mainly involves stumping for candidates and generally requires her to travel outside of the state.

Palin testified about how she entered politics, running for city council in Wasilla in the 90s and eventually serving as Alaska’s first female governor.

When Palin was tapped to be McCain’s running mate, she testified she didn’t know she was being pursued until his campaign called her.

“I was very, very honored and excited,” Palin testified.

Palin testified that she was thrust into a “very different kind of spotlight” when she became McCain’s running mate.

“I don’t think they were prepared for me because I was new to the national stage,” Palin said.