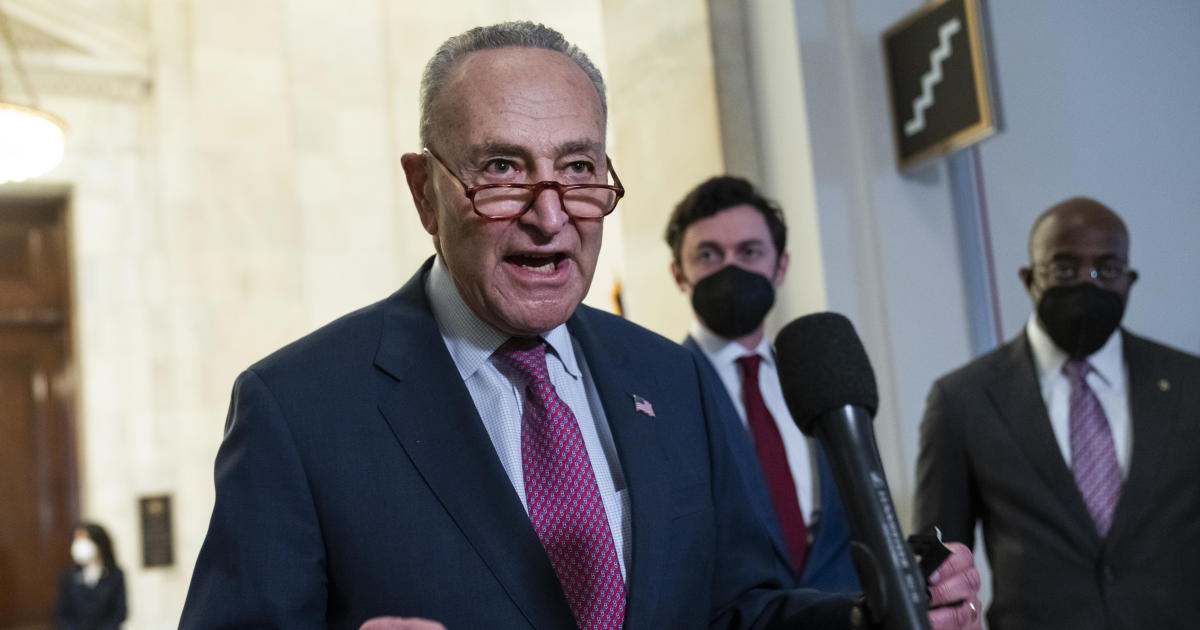 Washington — Senators returned to the U.S. Capitol on Tuesday to charge ahead with consideration of voting rights legislation, even in the face of opposition from Republicans that is expected to tank the effort and roadblocks from a pair of moderate Democrats.

The Senate convened to begin debate on a package approved by the House last week that combined the two voting rights bills, the Freedom to Vote Act and John Lewis Voting Rights Advancement Act. Senate Majority Leader Chuck Schumer last week adjusted Democrats’ strategy for taking up the voting rights legislation, using existing rules to force debate on the package with support from just a majority of senators.

While Schumer has said the move requires Republicans to go on-the-record with their opposition to the package, GOP senators are expected to block the legislation from advancing to a final vote, as advancing it requires 60 votes in the evenly divided chamber.

Democrats then plan to move to consider changes to Senate rules, which would allow them to push legislation through without relying on Republican backing. But that effort to revamp the rules is also expected to fail, as two moderate Democrats, Senators Joe Manchin of West Virginia and Kyrsten Sinema of Arizona, oppose altering the filibuster.

The forthcoming Senate action on voting rights legislation comes after President Biden last week ramped up the pressure on Congress to send to his desk the legislation that would overhaul the nation’s voting laws. The Freedom to Vote Act would establish national election standards, and the John Lewis Voting Rights Advancement Act would reinstate a core provision of the Voting Rights Act that required states with a history of racial discrimination in voting to get approval from the Justice Department before changing their election policies.

In a forceful speech in Atlanta, the president threw his support behind eliminating the filibuster to push the voting rights legislation through the Senate, where its 50-50 margins have complicated Democrats’ efforts to enact key pillars of Mr. Biden’s domestic policy agenda.

The president appeared before Senate Democrats on Capitol Hill on Thursday to continue lobbying them to overhaul Senate rules to allow passage of the voting rights measures, but acknowledged the effort could be doomed.

“I don’t know that we can get it done, but I know one thing: As long as I have a breath in me, as long as I’m in the White House, as long as I’m engaged at all, I’m going to be fighting to change the way these legislatures have moving,” he told reporters after his meeting with the Senate Democratic caucus.

Just before Mr. Biden met with Senate Democrats, Sinema delivered a Senate floor speech in which she noted her support for the voting rights bills but reiterated her opposition to changing the filibuster rules, which she said would “worsen the underlying disease of division afflicting our country.”

Democrats, though, have criticized Sinema and Manchin for stymying their efforts to preserve ballot access and counter changes to elections procedures being pushed by Republicans at the state level.

“I know that these two Democrats have decided that it is much more important to them to protect the voting rights of the minority on the Senate floor than to protect the voting rights of minorities in this great country of ours, this great country, the minorities that made it possible for them to be in the position that they’re currently in,” Congressman Jim Clyburn of South Carolina, the No. 3 Democrat in the House, told ABC’s “This Week” on Sunday. “I hope, but I don’t think that we will change their mind. But we will see.”

Asked Monday about her message to the pair, Vice President Kamala Harris told reporters she is “not going to absolve — nor should any of us absolve — any member of the United States Senate from taking on a responsibility to follow through on the oath that they all took to support and defend the Constitution of the United States.”

While the Democratic-led House has passed legislation to reform voting and elections procedures, Republicans in the Senate have on four different occasions blocked the bills from advancing in the upper chamber, where 60 votes are typically needed to begin debate on a measure.

That opposition laid the groundwork for Schumer to pursue the strategy in which the Senate would debate the House-passed measure despite the expected Republican blockade to end debate and move to final passage.

Republicans have criticized the legislation as a federal takeover of state-run elections, and some are instead pushing for the Senate to embrace changes to the Electoral Count Act, which they argue would get bipartisan backing.