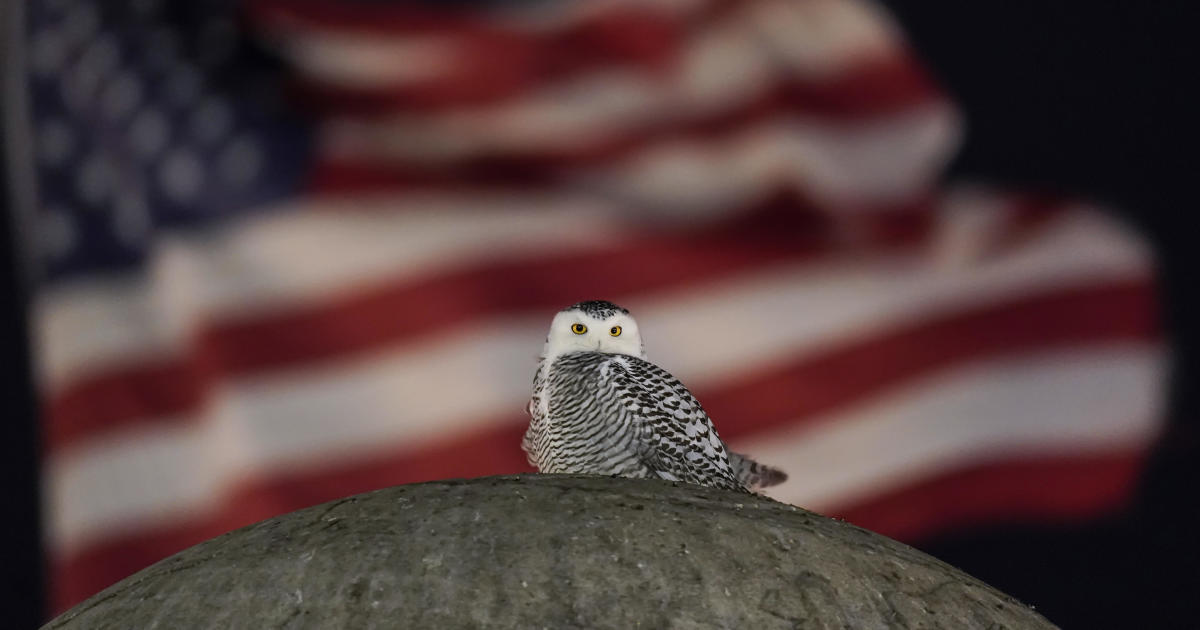 A snowy owl apparently touring iconic buildings of the nation’s capital is captivating birdwatchers who manage to get a glimpse of the rare, resplendent visitor from the Arctic.

Far from its summer breeding grounds in Canada, the snowy owl was first seen on January 3, the day a winter storm dumped eight inches of snow on the city.

Since then, it’s been spotted in the evenings flying around Washington’s Capitol Hill neighborhood, landing on Union Station, the National Postal Museum, various Senate buildings, and Capitol Police headquarters. The D.C.-based American Bird Conservatory said the bird even made an appearance at Reagan National Airport.

Late last week about three dozen people in thick coats trained their binoculars on the football-sized bird with bright yellow eyes as it perched on the stone head of Archimedes, a famous ancient Greek mathematician, carved above the train station entrance.

The nocturnal hunter appears to be targeting the city’s plentiful downtown rat population. Matt Felperin, a naturalist for Nova Parks in Northern Virginia, told the Washington Post, that the bird is “”killing it” — feasting on rats and pigeons at Union Station.

“Snowy owls are coming from a part of the world where they see almost nothing human, from completely treeless open Arctic tundra,” said Scott Weidensaul, a researcher at nonprofit Project SNOWStorm, which tracks snowy owl movements.

Some owls migrate south out of the Arctic every winter, but the number fluctuates, he said. About every 3 to 5 years, a spike in the population of lemmings, their chief food source, results in a larger number of surviving owl chicks. In those “irruption” years, more birds migrate and migrate farther.

However, “in irruption years, they tend to go farther south than they usually would,” he said. “A lot of the snowy owls we’re seeing now in the East and Upper Midwest are young birds, on their first migration.”

On eBird, a nonprofit platform used by birdwatchers, snowy owls have been reported this winter in Kansas, Missouri, Tennessee, North Carolina and Maryland.

Since it was first seen, the Capitol Hill owl has attracted a few dozen birdwatchers each night hoping to spot the same owl species that delivers messages to Harry Potter.

The onlookers have included new birdwatchers and those who have been doing it for decades, like Swiss ambassador to the U.S., Jacques Pitteloud, many hoping for a “lifer” – the first time a birdwatcher has seen a particular bird.

Last Thursday, the owl perched on a bronze eagle atop a flagpole. Then it soared, its 5-foot white wingspan silhouetted against the inky night sky, to land on a large stone orb held by carved birds, part of an ornate fountain.

Ambassador Pitteloud picked up his camera tripod and ran through the grass to get a better view. When he later posted on Facebook, the 50-year veteran birdwatcher wrote, “The Superstar of Union Station! Snowy owl, a lifer for me in a very, very unlikely setting!”

Kerry Snyder, who lives in Washington, said she recently became an avid birdwatcher. “I got into birding during the pandemic – it’s a great way to connect with people outdoors, when that’s been the safest place to be.”

She reminded other onlookers not to use flash photography, or approach the owl too closely, lest the bird feel startled or threatened – good practices for viewers observing any bird of prey.

Scientists consider snowy owls to be ” vulnerable ” to extinction and estimate the total global population to be less than 30,000 birds.

Weidensaul said that threats to snowy owls include urban hazards – in particular, vehicle collisions and poisons used to kill prey animals like rats, which can also kill raptors – as well as climate change.

“The climate is changing more dramatically in the Arctic than anywhere else on Earth,” he said, and that may make sightings like this one even rarer. In some parts of the Arctic, thinning ice is already reducing the number of boom years for lemmings.

After decades studying snowy owls, Weidensaul still feels awe: “This is a piece of the Arctic in downtown D.C. – you’re not going to see a polar bear walking in front of the White House.”

Last year, a snowy owl was spotted in New York’s Central Park for the first time in more than a century. Experts said the last recorded sighting of a snowy owl in Central Park was back in 1890.