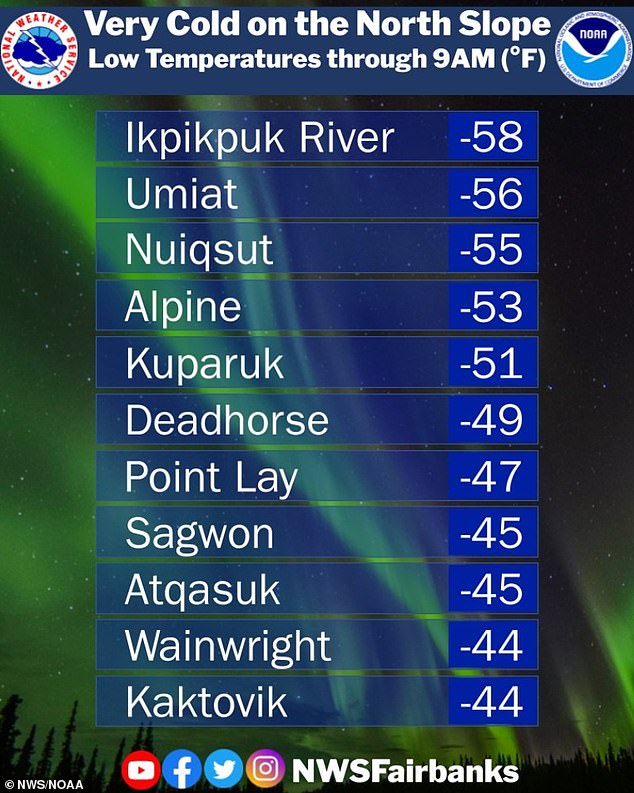 Bundle up, the big freeze is upon us!

Low temperatures and strong winds have led to bone-chilling cold across the Last Frontier this week, making it feel like 88 degrees Fahrenheit below zero in one remote Alaskan town.

Temperatures in most of Northern Alaska have dipped to 50 degrees below zero this week, with strong wind chills of over 15 mph in most of those locations – making it feel even colder.

The cold is due to an atmospheric river event that will bring rain and possible flooding across the southeast part of the state while the northern interior of the state deals with bitterly cold temperatures, according to the National Weather Service.

As of Wednesday morning, low temperatures across the North Slope – the northernmost borough in Alaska with a population of about 11,000 people – were expected to be 58 degrees Fahrenheit below zero.

Temperatures in most of northern Alaska have dipped to below 50 degrees this week, with strong wind chills of over 15 mph making it feel even colder 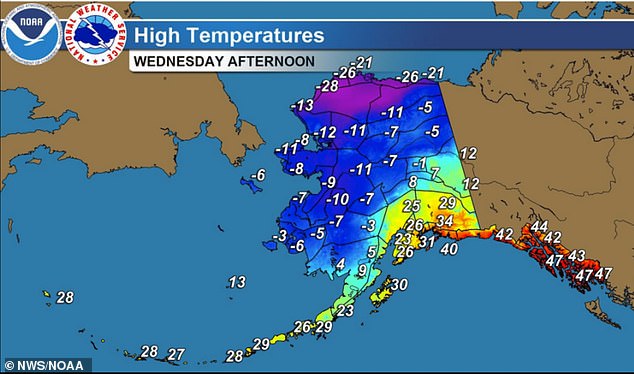 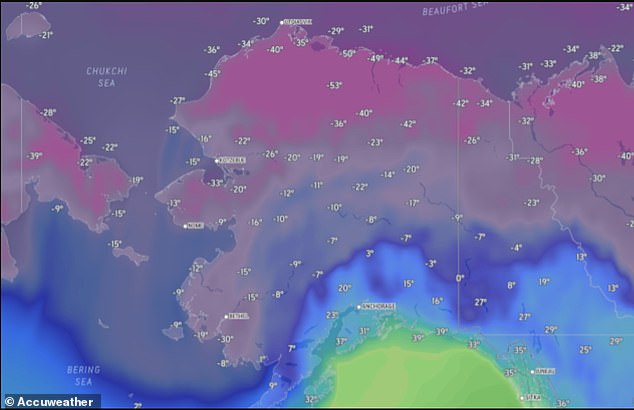 ‘The jet stream is running through the middle of the state, with the polar vortex and Arctic air trapped over northern Alaska producing dangerous low temperatures and AccuWeather RealFeel Temperatures that are abnormal even for one of the coldest parts of the country,’ AccuWeather Meteorologist Thomas Geiger said.

The temperatures have been so extreme that on Tuesday, there was a more than 100-degree difference between the highest (+47) and lowest (-55) temperatures in Alaska, WoodTV.com reported.

‘The intense cold is confined to the northern part of the state across the Brooks Range and the North Slope,’ AccuWeather Senior Meteorologist Dan Pydynowski said.

In Nuiqsut, the temperatures dropped to 49 below on Wednesday morning with a warning of dangerous wind chills of 75-below by the NWS, warning that the dangerously cold wind can cause frostbite in as little as 10 minutes to exposed skin. 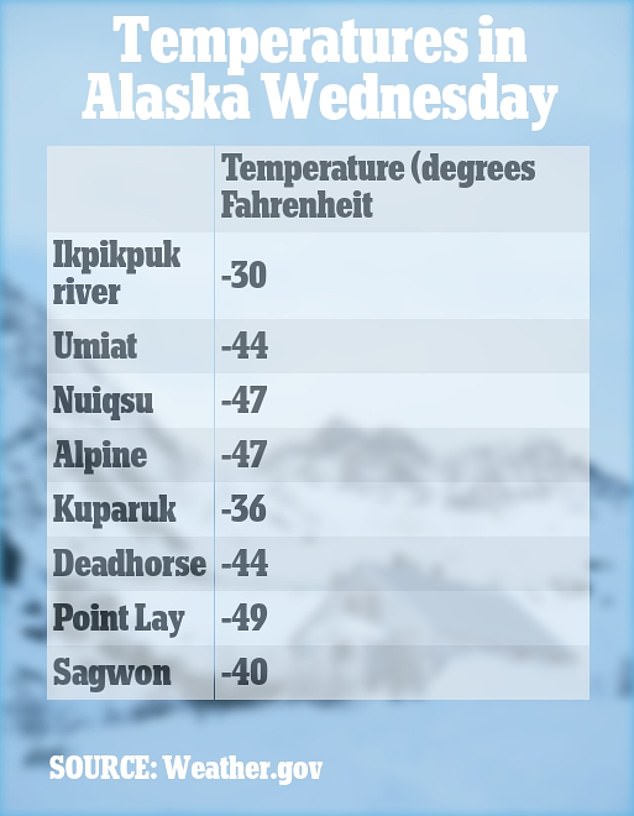 Freezing cold temperatures in Alaska on Wednesday. Temperatures dropped down to -49 in Point Lay 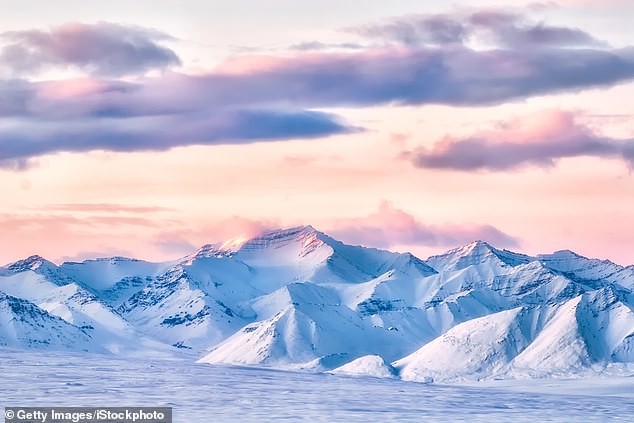 As of Wednesday morning, low temperatures across the North Slope were expected to be 58 degrees Fahrenheit below zero (high peaks of the Brooks Range in the Alaskan Arctic pictured) 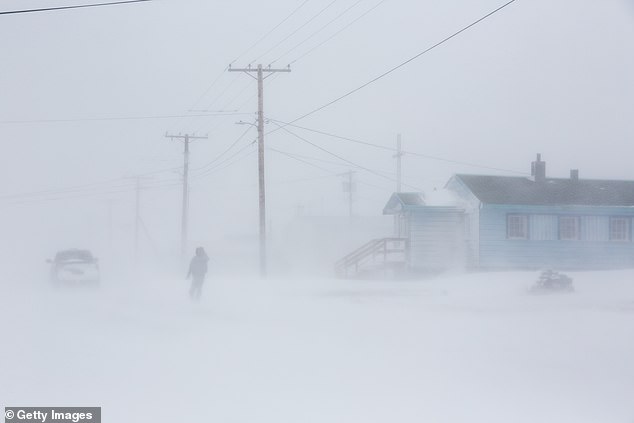 ‘The intense cold is confined to the northern part of the state across the Brooks Range and the North Slope,’ AccuWeather Senior Meteorologist Dan Pydynowski said (Native Arctic Inupiate village of Kaktovik, Alaska pictured) 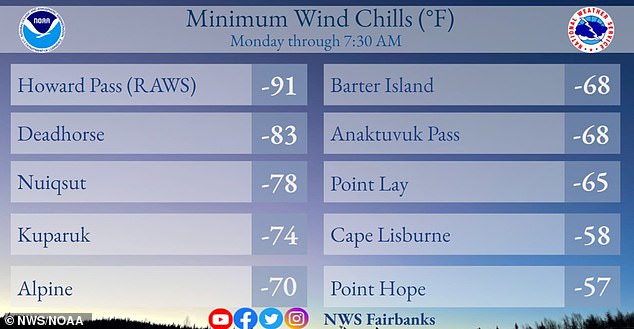 Wind chills made below zero temperatures in Alaska feel even colder, dropping to below 91 degrees in Howard Pass on Monday

‘Frost bite can occur quickly and even hypothermia or death if precautions are not taken,’ said Wednesday’s warning for the Beaufort Sea Coast, which also includes Prudhoe Bay, Alpine, Deadhorse and Kuparuk.

As of Wednesday morning, temperatures rose to 31 below zero with wind chills of 42 degrees below.

In Utqiagvik, temperatures reached minus 27 early Wednesday morning and below 53 degree wind chills, which is fairly average winter temperatures for the Alaskan town.

‘Extreme cold will continue Wednesday in Utqiagvik with highs around 25 below zero which is 20 [degrees] below normal for this time of year,’ Pydynowski said, adding that lows will still not be anywhere near record levels.

Last week, temperatures in Texas were below freezing due to winter storm Landon, which spanned 2,000 miles from the Rockies to New England.

The winter storm swept the nation, putting 95 million Americans under winter weather advisories through Saturday and canceling 4,800 flights across the nation.

The storm has left about 350,000 homes and businesses across Texas, Ohio, Tennessee, West Virginia, Pennsylvania and New York without power, according to PowerOutage.us.

While the storm wreaked havoc across the US, the heavy snow and ice accumulations and even the tornadoes aren’t out of the ordinary for this time of year, senior Accuweather meteorologist Adam Douty told USA Today.

While there was a large amount of icing in Tennessee and Arkansas, 8 to 12 inches of snow for much of the Midwest isn’t uncommon, Douty said.

‘It’s a good snow storm … but it’s nothing unusual,’ he said of last week’s wild weather.

In 2021, the US was hit with 20 extreme weather events that resulted in 688 deaths and $145 billion in damages, according to a report from the National Oceanic and Atmospheric Administration (NOAA).

The events include everything from droughts to hailstorms in Texas to wildfires in the west and flooding.

The four tropical storms that rocket the nation had the biggest impact, costing Americans $78.5 billion – and $74 billion was just from damages during Hurricane Ida that left a trail of destruction from Louisiana to New York.

NOAA climatologist and economist Adam Smith, who compiles billion-dollar weather disasters for NOAA, told the Associated Press: ‘It was a tough year. Climate change has taken a shotgun approach to hazards across the country.’