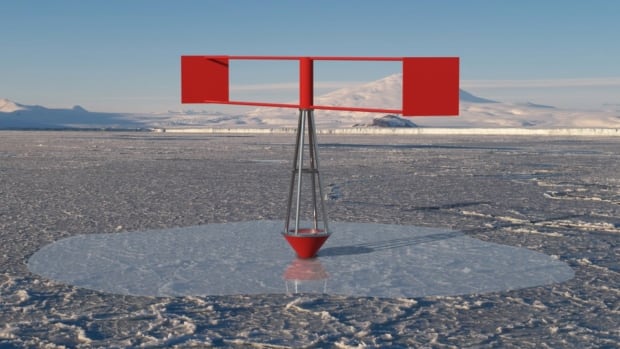 A Welsh company plans to test a wind-powered machine in Nunavut next winter that, if successful, will thicken sea ice as part of an effort to keep it around longer.

“What we can do then is, hopefully, mitigate some climate change through the use of the machines and build up the ice and, therefore, actually protect the Arctic habitat and restore the ecosystem up here,” said Cían Sherwin, CEO of Real Ice, based in Gaerwen, Wales.

He and two members of the company visited Iqaluit in February to meet with people in the region to get feedback and involve them in the project.

Called a re-icing machine, the plan is for it to be roughly five metres long. A two-metre-long ice auger at the bottom will pierce the ice, reaching the water below.

The water will be pumped up via the machine and then trickled out, creating a small pond on the surface around it that will turn into a new layer of ice.

A heater will help keep the water flowing. A wind turbine at the top of the machine will provide power.

Ice is a key surface for many parts of life in the North, including travel between communities, hunting, recreation, and fishing. Thickening ice by adding more water to the surface is a common way to build ice roads.

Nick Penny, the project’s engineering adviser, said he came up with the idea for the machine, and the concept was developed with the help of students from Bangor University in Wales.

“I’ve taken that through to the modular design that you see here,” he said, holding a scale model of the machine, “to allow it to be made into components that would fit on a snowmobile.”

Once the new layer of ice is formed, the machine can be rotated out of the icy grip and then used again elsewhere, Penny said.

“In theory, the concept seems reasonable,” Walt Meier, a senior research scientist at the National Snow and Ice Data Center at the University of Colorado Boulder in the eponymous U.S. city, said in regard to the machine.

“It’s better than some of the other ideas that I’ve seen.”

Ice cover is valuable in slowing climate change because it’s highly reflective against solar energy, while exposed water absorbs much more, he said.

Still, it’s hard to imagine a way for the project to scale up to make a significant difference against climate change, Meier said, and making sure the machines operate well with salt water and without freezing in the extreme cold of the North will be a challenge.

One way the machine could help communities is by lengthening the amount of time coastlines are protected from erosion: “When waves come in, they hit the ice. The ice damps the waves.”

Late in the season, adding snow on top of ice would be a more effective way to slow the melt because it acts as an insulator, helping keep the ice cold at its peak thickness, Meier said.

Sherwin said the company is looking to partner with businesses, governments, and other organizations to help with the machine’s development.

He said the hope is to test a prototype in Cambridge Bay next winter with the help of the Canadian High Arctic Research Station, and also in Iqaluit.

Iqaluit Mayor Kenny Bell met with members of the company when they were in the city.

If the machine works and becomes available to buy, that could create business opportunities in the city, he said.

“With climate change, our ice is so unpredictable that it’s becoming scary,” Bell said. “Anything that’s going to help reverse climate change is worth exploring.”

Sherwin said a $1.2 million crowdfunding campaign is planned to launch in the next month or so to help fund the project, potentially allowing for more machines to test at the same time in the territory.

The company also wants to look into building larger versions of the machines to create more ice in the future, he said.