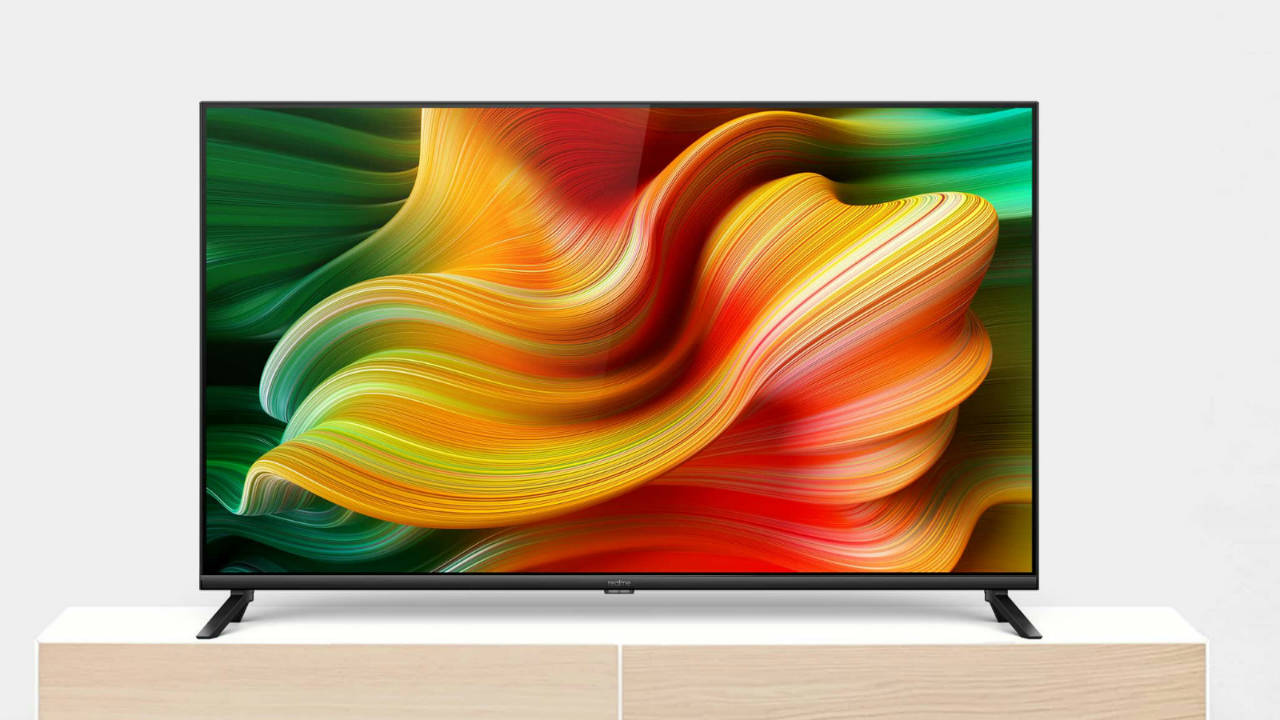 In the past couple of months, we have seen the launch of several TVs. We have witnessed Kodak and Thomson leave AOSP (Android Open Source Platform) and get onto the Android TV bandwagon. OnePlus launched its range of budget and mid-range TVs. Nokia went big with a 65-inch TV and Compaq is jumping ship from PCs to manufacture TVs in India. In the midst of all this, we also saw Realme enter the TV space with the launch of the Realme TV. The TV is available in two screen sizes – 32-inch HD ready and 43-inch FHD. Today we have with us the 43-inch Realme FHD TV for review. Is it worth consideration?

Speakers: 4 drivers with a total sound output of 24W

Let’s kick things off with the most important thing about the Realme TV – the display panel and picture quality. The TV has an FHD resolution with support for HDR, and that’s OK as we have seen other FHD TVs support HDR. HDR and resolution are independent of each other, so it is important to note that a TV does not need to have a 4K resolution to show you HDR content. It does, however, need to have a 10-bit panel which the Realme TV does not. The Realme TV has an 8-bit panel which isn’t ideal when consuming HDR content. So if you are considering this TV for its HDR capabilities, we say, think again. The TV works well for content consumption in SDR be it from streaming services or a set-top-box but gives a lacklustre experience for HDR content. Let’s break it down for you in detail.

One thing to note is that you can consume HDR content only from the built-in apps like Netflix because the TV’s HDMI ports do not support HDMI 2.0. They are HDMI 1.4, so even if you connect a device like the Xbox One X or a PS4 Pro, or a Fire TV Stick 4K to consume content in HDR, the TV will only recognise its SDR source due to the hardware. This isn’t a bad thing as the performance of the TV is a lot better in SDR.

Through the built-in Netflix app, we played HDR content like Altered Carbon and Our Planet. Altered Carbon has a warehouse fight sequence that has some good bright and dark sequences. In HDR it all looked dull and dark and the content wasn’t enjoyable. Especially when you immediately switch to an external SDR source (in our case, the Xbox) and the image looks a lot better. Better how? Well, in HDR, the sequence looks dull, even in the bright parts and in the dark parts the dull content has loss of detail. In SDR, the TV isn’t trying to achieve HDR-like contrast, so the dark portions of the content are still enjoyable. 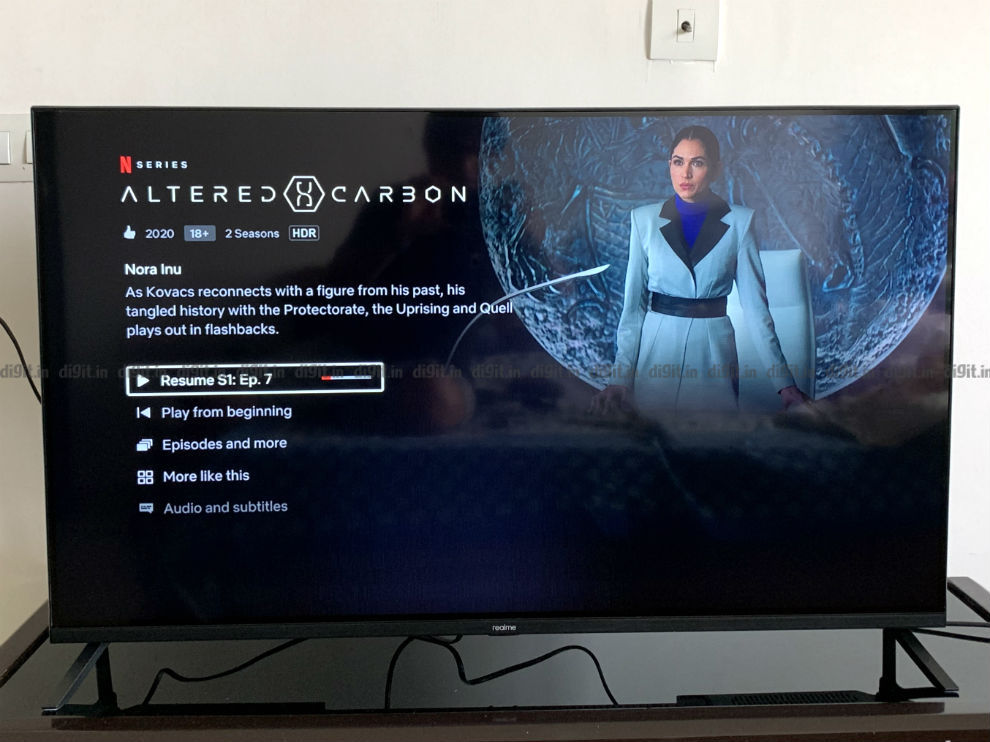 Another show in HDR with nice bright visuals is Our Planet. Once again in season 1 episode 1 at the beginning when a Polar Bear is walking on ice, you can notice the difference in quality between HDR and SDR. Playing the content from an external source like the Xbox or Fire TV stick, yielded much better results. Again in HDR, the content looked a lot duller than we like especially when compared to the SDR performance on the same TV.

The sad thing is that a user can’t turn off the HDR from the built-in apps. You will have to resort to an external source to consume SDR content. You cannot bring up any picture settings when consuming content from the native apps as well. When I asked Realme about this, they said that if the TV had a custom UI, they’d be able to give users access to picture settings. Because of Android permissions, they cannot do it. Overall, for HDR, the performance of the TV was lacklustre.

When it comes to SDR content, we played a lot of it from Netflix, Prime Video, YouTube and more. With SDR, the TV does a good job. Even in a relatively bright room, the reflection handling of the TV was decent and one could enjoy some of the fight sequences in a movie like John Wick for example. Even shows like Young Sheldon on Prime Videos, Friends on Netflix, Mission: Impossible and more were rich to watch in SDR from the built-in app. No complaints here. Once again the lack of the ability to tinker with the settings was annoying but if you connect a Fire TV stick to the TV then you shouldn’t face this problem. Overall, if watching everyday set-top-box content is what you are considering this TV for, then it shouldn’t disappoint you. 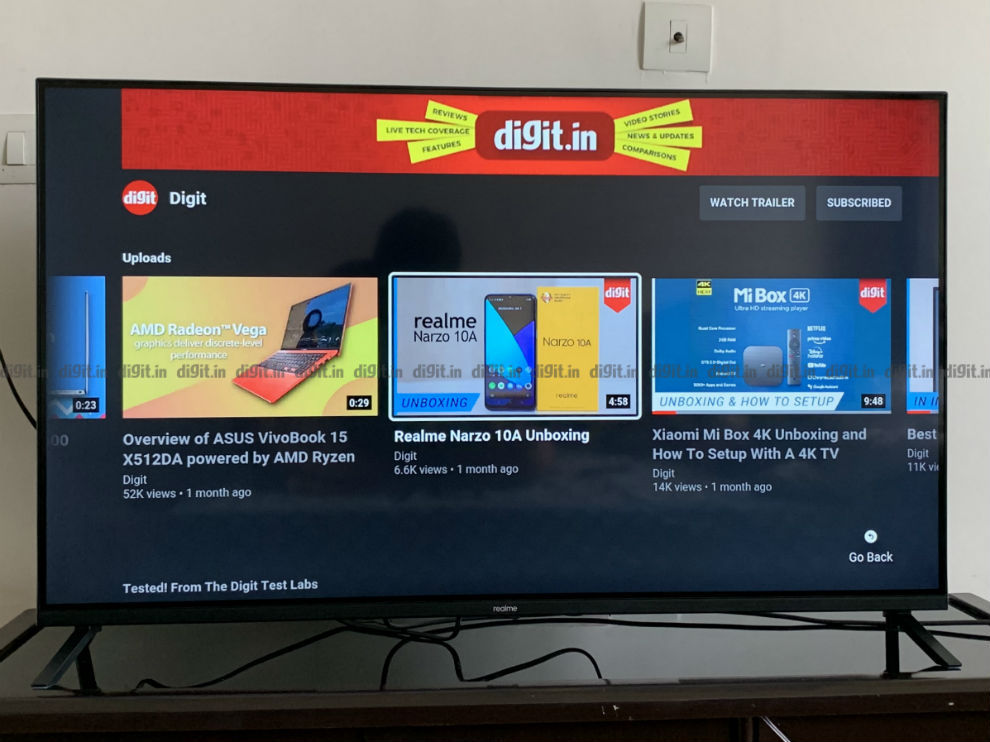 Before we get into the performance of the panel, let’s get a curious situation out of the way first. The TV has its game mode setting in two places. One is in the Picture Settings which looks to tweak the picture settings slightly for use in “game mode”. The other is under the advanced video settings and toggling this one on and off seemed to yield no result.

So how does the TV perform for gaming? Quite decent, considering the price and features on offer, almost at par with the Onida 43-inch Fire TV FHD TV (Review). Thankfully the TV isn’t decoding the signal as an HDR signal so we are playing the games in SDR. A game like Assassin’s Creed Odyssey which has beautiful environments and rich colours looked good. In the daytime, in the game, we got to see some fairly rich environments and the gameplay was smooth as well. When playing Assassins Creed Odyssey, some TVs tend to have a warm bias towards the colour, but that isn’t something we noticed on this TV, which is good. 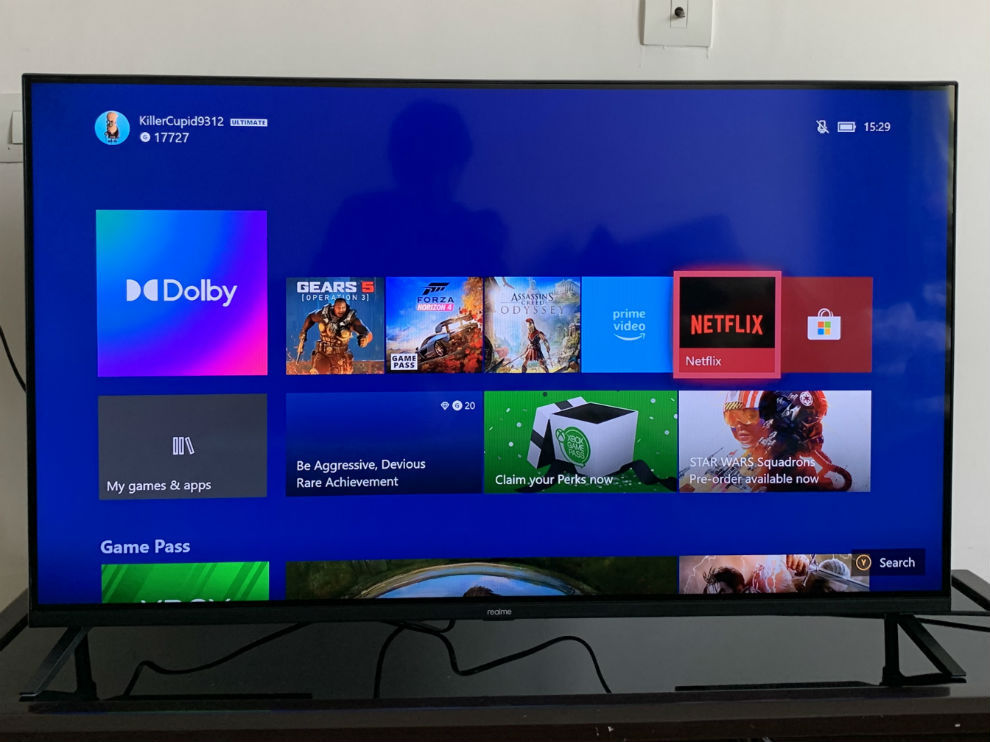 Even in a game like Forza Horizon, be it a race in the night or the day, the game looks good with details and bright picture output. Gears 5 was fun with its lush environments and chainsaw hacking action. Playing games on this TV is fun and if 1080p SDR gaming is what you are looking for, then this TV will meet expectations at this price. Just remember it has 2 game modes.

When it comes to audio, the Realme TV has 4 drivers (two full-range drivers and two tweeters) all giving you a sound output of 24W. For everyday use like watching the news, TV shows and the occasional movie the speakers deliver good audio. The vocals in shows like Young Sheldon or even some movies were clear. It is when more sounds appear on screen that things get a little muddled. So if you have a background score along with some gunfire and people talking (Mission Impossible: Ghost Protocol, for example), then the audio tends to sound a little muddy. The audio is loud and the speakers have enough punch to listen to in a small room without reaching 70 percent of the volume. 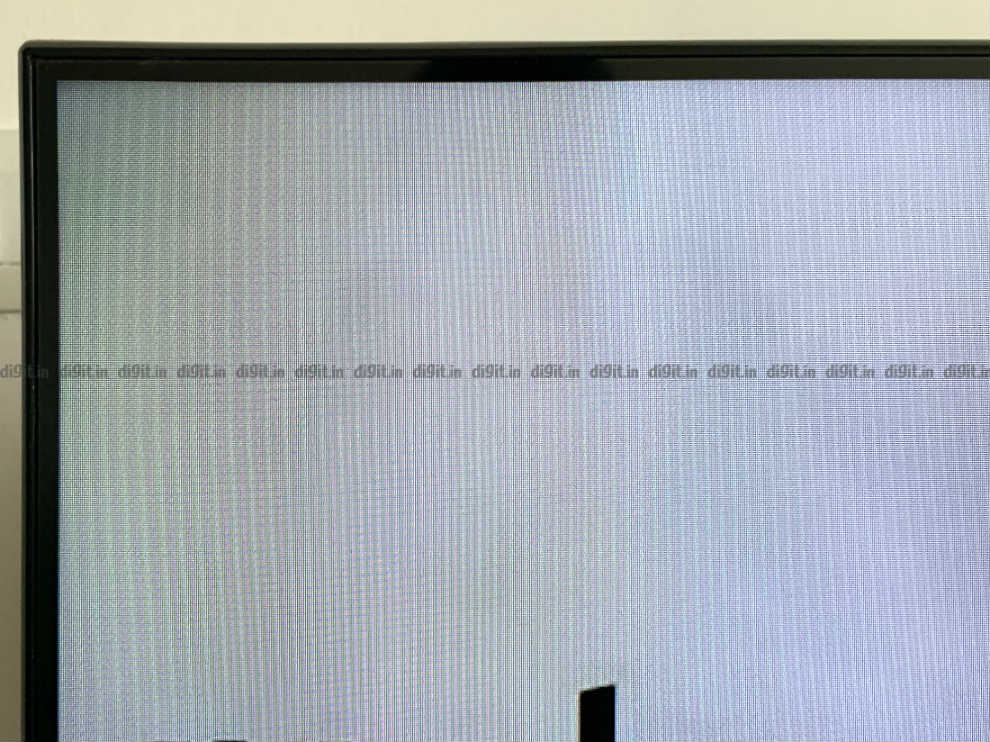 Stock Android TV is the name of the game here and that’s what you get. Once the initial setup is done, the UI is butter smooth. Apart from one or two hiccups here and there, I faced no problem with the UI be it to navigate streaming services, switching between HDMI sources or even change the settings. Apart from the above-mentioned problem of not being able to control the picture presets when using the built-in services, the UI runs smoothly. Even the Google Assistant Voice controls work just fine, so no complaints here. 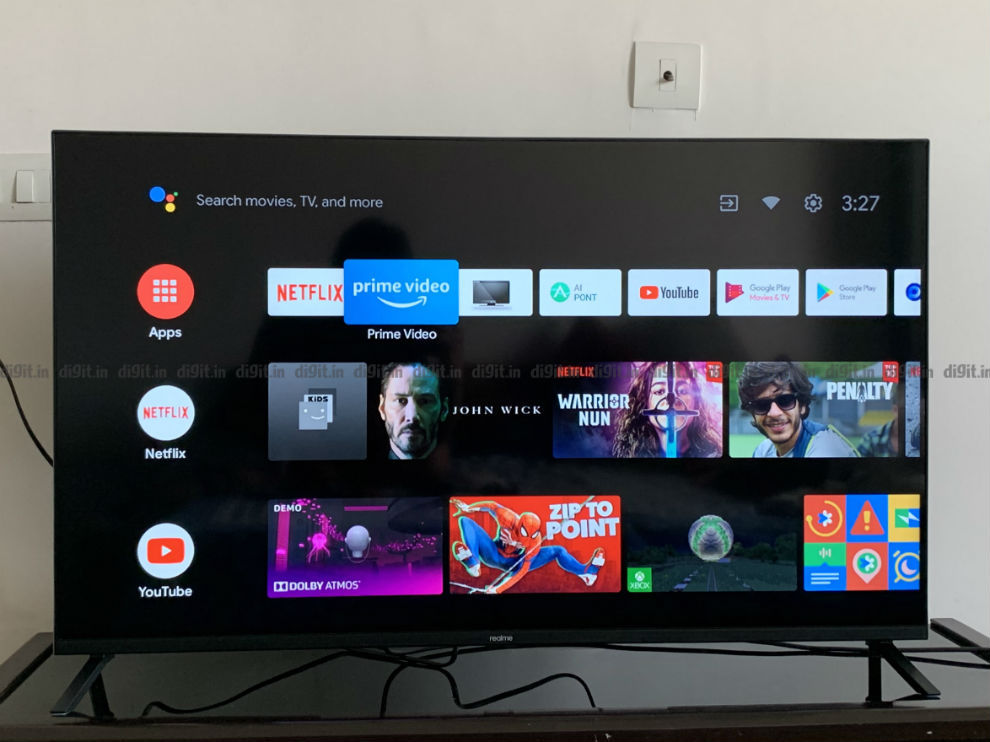 The remote control has one of the better designs I have seen on a budget TV in the recent past. It has a teardrop design – extremely thin up-top and getting slightly thick at the bottom where you have the battery housing. This design gives the remote a good grip. Adding to the grip is the matte finish which gives you the feeling that the remote won’t slip from your hand if you hold it lightly. It has a compact in hand feel which is a lot better than the Fire TV Stick remote control for example. 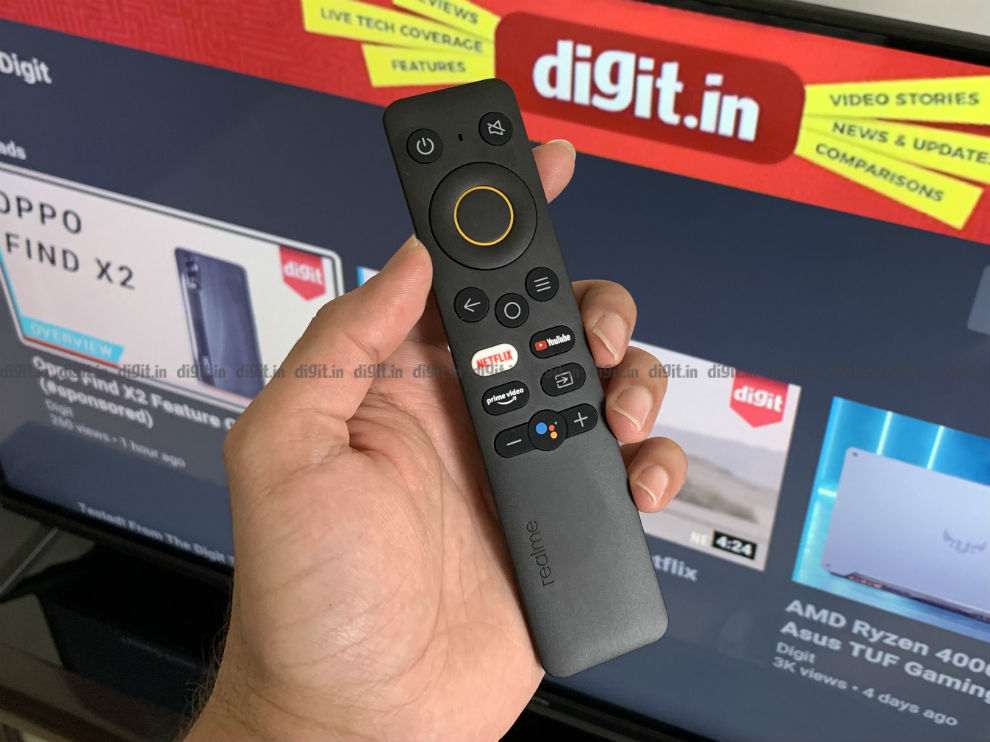 The buttons are simply laid out with the power and mute up top followed by the directional controls. It has dedicated hotkeys for Netflix, YouTube and Prime videos which is nice. The OTT hotkeys, Google Assistant button and volume controls are easily reachable by a user’s thumb adding to the ergonomics of the remote control. 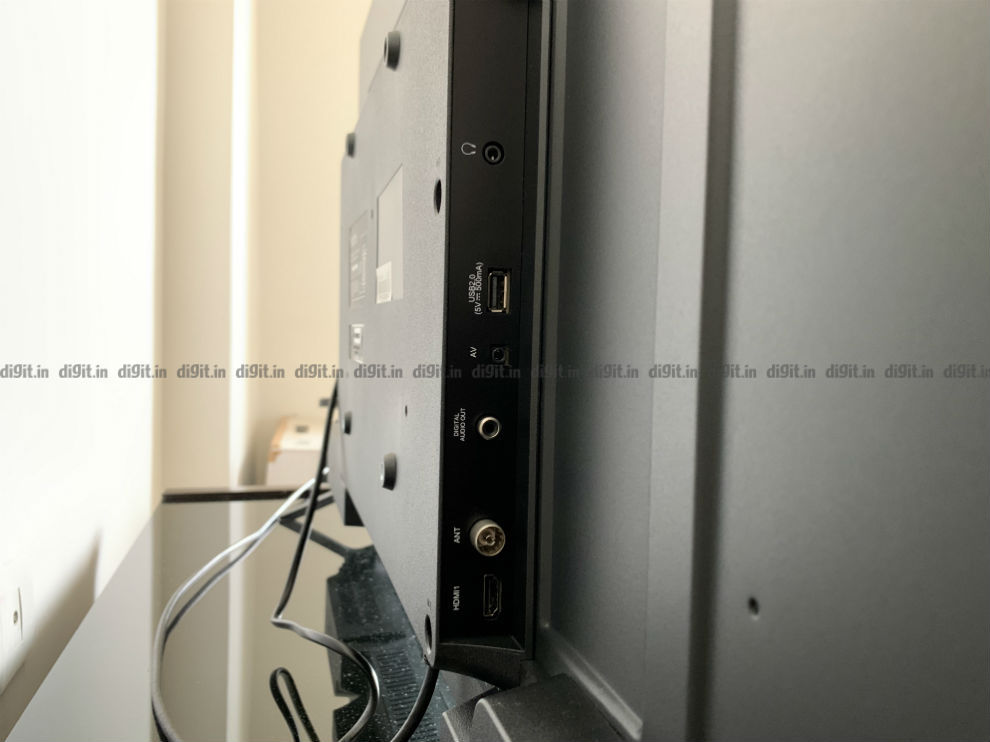 Considering the price of the TV, we don’t expect it to boast of any great shakes as far as build and design are concerned. It is a budget TV and it looks the part with a plastic shell and 2 plastic feet that hold the TV firmly in place. All the connectivity options are at the back of the TV with some ports facing sideways and the rest face down. Facing the side, we have one HDMI port, antenna port, coaxial audio port, AV port, one USB port and headphones port. Facing down we have two HDMI ports, a LAN port and one USB port. 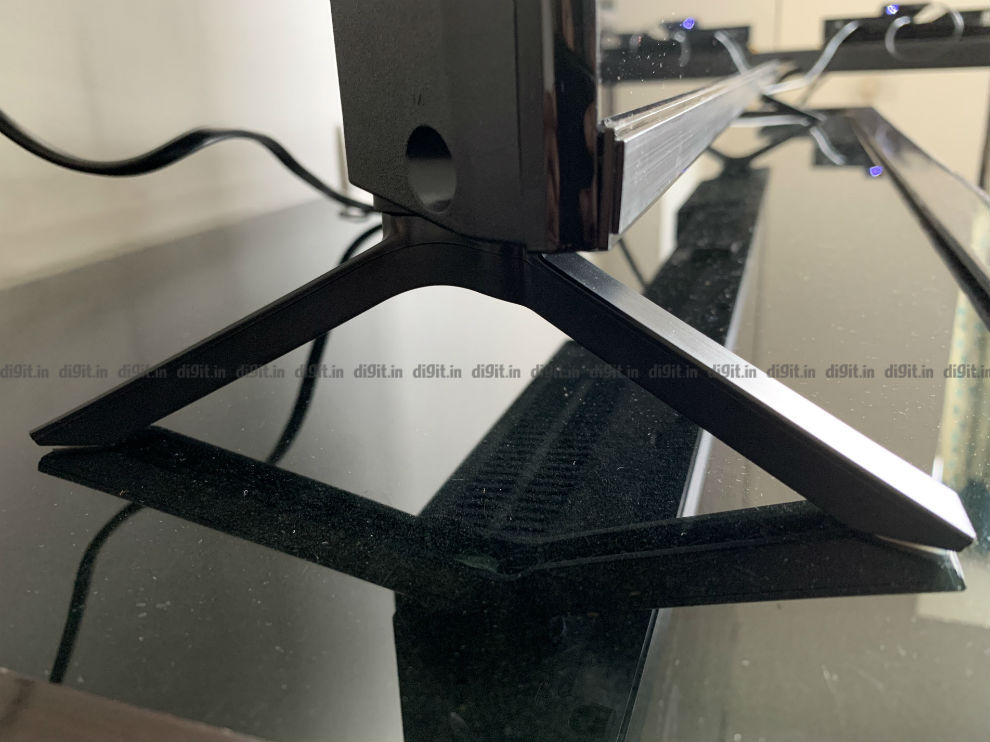 Overall the build and design of the TV are acceptable, considering the price point. It is functional. When placed on a tabletop, you can fit a set-top-box below the TV but don’t expect to fit a gaming console below the TV when kept on a table.

The lacklustre HDR performance from the TV is a big con. Add to it the fact that you can’t control the picture presets of the built-in apps and a large portion of the smart capabilities start to feel handicapped on this TV. To make the most of this TV you will have to use it with an external device like the Fire TV stick or any other streaming box. If watching everyday set-top-box content is your priority, then this TV should get the job done quite well. However, for streaming services, you will have to resort to an external device. The TV comes with a very ergonomic and easy to use remote control.