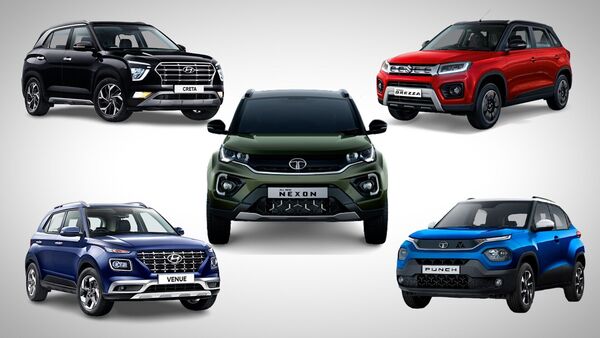 Tata Nexon SUV continues to dominate one of the most popular segments in India. Hyundai too had two entries in top 5 SUVs in May with Creta and Venue. Maruti’s sole entry was Vitara Brezza.

Tata Motors and Hyundai Motor are leading other carmakers in terms of the popularity of their SUV models. Both carmakers had two of their models in the top 5 SUVs sold in India in May. The two carmakers, which are fighting for the second spot among India’s largest carmakers, have the edge over India’s top carmaker Maruti Suzuki. The two are also ahead of Mahindra and Mahindra, which specialises in SUV manufacturing.

Here is a look at the top 5 SUVs sold in India in May:

The sub-compact SUV from Tata Motors has seen exceptional rise in sales in recent months. From more than one lakh units sold in 2021, Tata Nexon SUV seems to be on path to record its best year ever since its first launch back in 2017. Tata Motors sold 14,614 units in May, which is an increase of 1,143 units over the previous month. Overall, Tata has sold 68,475 units of Nexon SUVs within the first five months of the year. At this rate, Tata Nexon will cross 1.50 lakh units this year. A large part of Nexon’s rise can also be attributed to its EV versions. Tata offers Nexon EV and Nexon EV Max SUVs to Indian customers. The Nexon EV is also India’s best-selling electric car.

The flagship five-seater SUV from the Korean carmaker took the market by storm when the facelift version launched in 2020. It had a successful run since, and still figures among the top SUVs sold in India. In May, Creta emerged as the second biggest choice for SUV buyers in India with 10,973 units sold. Hyundai is likely to soon come out with another facelift version of the SUV as the rivals prepare to step up their game in the SUV segment.

Maruti’s Vitara Brezza sub-compact SUV remains one of the top-selling models with just days to go for the launch of its facelift version. Maruti sold 10,321 units of the Brezza SUV. The carmaker has recently announced that it will shift its focus on the SUV segment in India, where it lacks presence, and will look to take on the rivals like Tata and Hyundai with newer models. The new generation Brezza, scheduled to launch on June 30, is expected to be loaded with features and tech to enhance its appeal among buyers. It will also have a new engine, gearbox and improved mileage to offer practicality as well.

Small in size yet big in its appeal, Tata’s smallest SUV Punch is no pushover when it comes to popularity. Among the top 5 SUVs sold in Indian in May, Punch SUV offers more versatility than any of the other four. Tata Motors sold 10,241 units of Punch SUV last month, missing out Vitara Brezza’s tally by just 80 units.

At number five is Hyundai’s answer to Tata Nexon and Maruti Vitara Brezza. The Venue sub-compact SUV used to feature among top 10 cars sold in India each month. However, in recent months, the sales have dropped as the carmaker gets ready to launch its facelift version next week. Hyundai sold 8,300 units of Venue last month. The carmaker will hope the SUV will pick up sales once again to challenge the segment leaders in coming days.