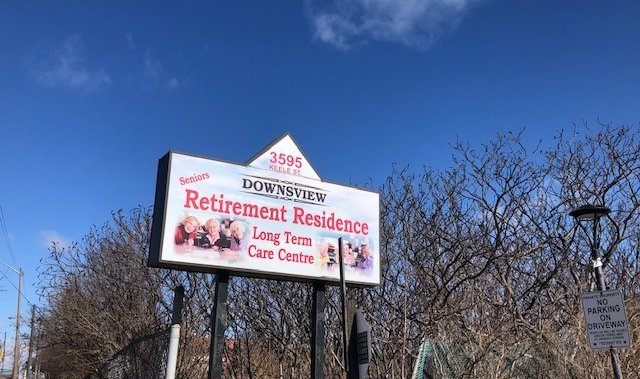 In addition to deaths from COVID-19, residents at two long-term care homes in the Toronto area died of dehydration and neglect during outbreaks last spring, newly-obtained Canadian military documents reveal.

“Twenty-six residents died due to dehydration prior to the arrival of the CAF team due to the lack of staff to care for them. They died when all they [needed] was ‘water and a wipe down,’” one report noted about Downsview Long-Term Care Centre in North York.

Another report stated “there had been resident deaths due to dehydration and malnourishment” at Hawthorne Place Care Centre, also in North York.

The documents obtained by Global News provide details never before heard about the state of these two long-term care centres prior to the Armed Forces arriving to help stop the spread of COVID-19.

“We have been very good at capturing COVID-19 deaths, but one of the things we have not yet fully captured were the deaths that occurred because of confinement syndrome,” said Dr. Nathan Stall, Geriatrician at Mount Sinai Hospital in Toronto.

At Downsview Long Term Care Centre, 65 people, including a personal support worker, died of COVID-19. At the peak of the outbreak, more than 100 employees were infected with the virus.

Global News went inside Downsview in March and met with the executive director, who said, “there would be times when we’d come in and we’d find out there were two nurses on a unit that would traditionally have eight staff at a time.”

Robert Scott said staffing was a major issue during the COVID-19 outbreak, and even before that.

“The biggest issue to me would be the staffing crisis,” he said, “anybody who tells you they’re shocked by this has not been paying attention over the last 15 or 20 years.”

Scott is a trained registered nurse who said he has worked in the long-term care sector for nearly two decades.

At Hawthorne Place Care Centre, 51 residents died of COVID-19. The military report says “there was feces and vomit on floors and on the walls” and “two of the residents had dried feces under their fingernails for a prolonged period of time.”

“We know that people died because of so-called confinement syndrome, which the Long-Term Care Commission actually makes reference to, where residents died of this global lack of care and stimulation and attentiveness to the needs,” said Stall.

“We saw people died of the fundamental lack of food, water and care, but also there were many residents who died over weeks to months from the decline of lack of care and from not being able to have access to their caregiver and family,” he added.

Global News reached out to the management company of each of the two long-term care homes referenced in the new military reports.

James Balcom, of GEM Health Care Group, which owns Downsview, said in a statement, “Based on the experience of our staff at Downsview, checking and double-checking our own facility records and our reporting to and co-operation with the Office of the Chief Coroner (OCC), the information … regarding 26 deaths at Downsview Long Term Care Centre due to dehydration is false.”

Advocate for long-term care residents Vivian Stamatopoulos is calling for an investigation by police into these new documents suggesting neglect.

Read more:
‘A lot of suffering’: Frontline health-care workers describe the moments before death by COVID-19

“I would hope Toronto Police Services is going to immediately open up an investigation and really look at criminal charges because there is no question what we are seeing here is neglect,” she said.