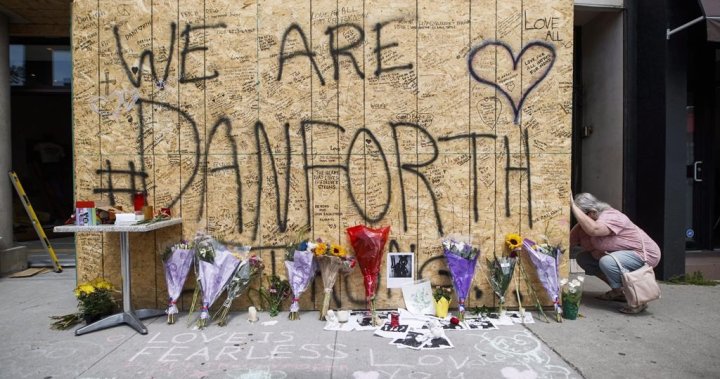 Ten-year-old Juliana Kozis and 18-year-old Reese Fallon were killed while over a dozen others were wounded the night of July 22, 2018 when Faisal Hussain walked down Danforth Avenue, in the heart of Greektown and opened fire.

Hussain died of a self-inflicted gunshot wound to the head shortly after, Toronto police said.

“Today, we remember the lives lost and the lives forever changed by the Danforth tragedy three years ago,” Toronto Mayor John Tory said in a statement Thursday.

“Tonight, we will gather in their memory and in their honour, in gratitude for the service of our first responders and in solidarity with each other and the community,” he continued. “We remain determined to keep this a safe city, free from hatred and violence and where an innocent night out with friends in the summer can be peaceful and filled with joy.”

On July 22, 2018, two lives were taken in a senseless act of violence on the Danforth – one that I and so many others will never forget. We remember Julianna and Reese and thank those who responded to this tragic incident. @Toronto_Fire @TorontoPolice @TorontoMedics

Today, we remember the lives lost and the lives forever changed by the Danforth tragedy three years ago.

Read my statement below. pic.twitter.com/yAgVcKH1xN