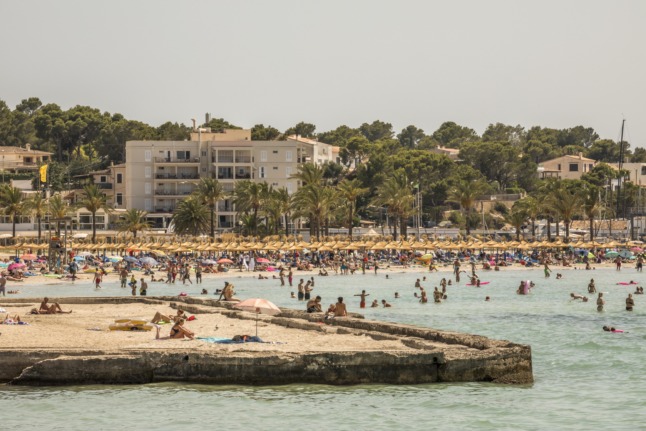 “The federal government is closely monitoring the situation in Spain and the Netherlands,” the Federal Foreign Office told the German Editorial Network (RND).

If an area is classified by the Robert Koch Institute (RKI) as a ‘high incidence area’, anyone who hasn’t been fully vaccinated or has not recovered from Covid within the last six months has to quarantine for ten days when returning  to Germany. The self-isolation period can only be shortened after five days with a negative test.

The rules are thought to particularly impact younger holidaymakers, many of whom have not yet been vaccinated. But even fully vaccinated parents could get into trouble if their children were made to quarantine for at least five days after returning from their trip abroad instead of attending school.

‘Another blow to tourism’

Spain’s tourism industry had hoped for a much stronger business recovery this summer because of rising rates of vaccination across Europe – but now there are fears that increased restrictions could drive German visitors away.

READ ALSO: Why (and where) Germans are choosing to go on holiday by car this year

“This decision will mainly affect Mallorca and the rest of the Balearic Islands,” wrote local Mallorcan newspaper Última Hora on Friday. Regional daily Diario de Mallorca, meanwhile, described the reports of Spain’s change in status as “yet another blow to tourism”.

In normal times, tourism contributes more than 12 percent to the Spanish gross domestic product (GDP). On the Balearic Islands, which include Mallorca, Menorca, Ibiza and Formentera, and on the Canary Islands, it accounts for 35 percent of the economy and provides thousands of jobs.

Exploding infection rates in Spain and the Netherlands

Since the end of June, Covid numbers have skyrocketed practically everywhere in Spain. On July 11th, in light of spiralling infection rates, the German government moved Spain onto its ‘basic risk’ list, meaning travellers had to register on their re-entry into Germany after a trip.

Now – less than two weeks later – the country has one of the highest rates of infection in all of Europe.

This puts the country well above the 200 mark at which Germany can declare a country to be a high-incidence area. In Mallorca alone, the incidence recently reached a peak of 365.

Meanwhile, in the Netherlands, the 7-day incidence is currently over 400, while in Amsterdam, the incidence soared beyond 700 over the past few weeks. The country was put on the ‘risk list’ on July 16th.

724! (Amsterdam). In comparison, Frankfurt is the city with the highest amount of infections per capita in Germany. Their number: 23,2… Pfiew/Pfui! #Inzidenz pic.twitter.com/RzvFv5bWej

Experts credit the Netherland’s hasty reopening of public life and the infectiousness of the Delta variant for the skyrocketing figures. For the past week, the country has consistently recorded more than 9,000 new infections per day.

The consistently high numbers in both countries have led many to question why the Netherlands and Spain weren’t put on the high-incidence list sooner. According to the RKI website, however, exceeding the 200 mark means that a country will be more closely observed by health experts – rather than automatically put on the ‘high incidence’ list.

“The decisive factor for the quantitative assessment are actual and stable trends in the infection process, not snapshots,” a spokesperson from the Foreign Office told RND.