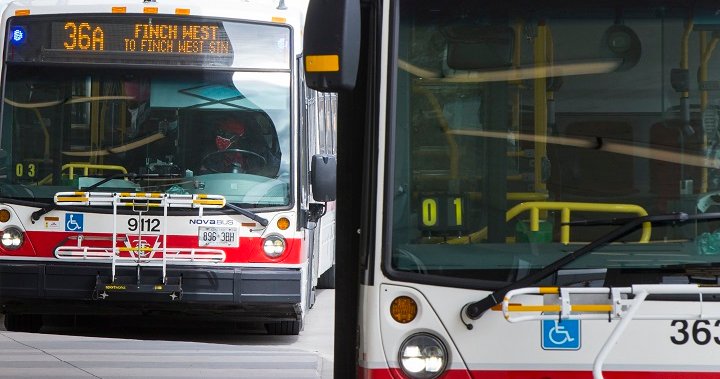 The Toronto Transit Commission (TTC) says service reductions are expected when its COVID-19 vaccine mandate comes into effect next month.

In a statement issued Wednesday, the TTC said it has developed “temporary schedules” taking into account employees who will be ineligible to work once the vaccine mandate takes hold at the end of the day on Nov. 20.

“Key among the considerations that went into planning the upcoming temporary service was prioritizing the busiest routes at the busiest times of day — in particular on the bus network,” the statement said.

Read more:
TTC to fire employees who do not get vaccinated against COVID-19 by Dec. 31

“The Nov. 21 schedules were planned to be reliable and predictable while protecting existing service on the TTC’s busiest bus route corridors at the busiest times of day such as Wilson, Jane, Eglinton, Finch and Lawrence East, among others.”

The TTC said other routes will see “varying levels” of changes which may be similar to seasonal adjustments made in the summer and December.

Waiting time changes will “generally be minimal,” the statement said, and ridership levels will be “within TTC service standards.”

All routes will operate over the same hours. The TTC said updated schedules will be posted on its website.

The TTC noted that ridership is currently at around 50 per cent of pre-pandemic levels.

The transit agency said contingency plans have been under consideration since a vaccine policy was announced in September.

Eighty-eight per cent of the TTC’s 15,090 active employees have shared their vaccination status — including nearly 86 per cent of unionized and 94 per cent of non-unionized employees. The TTC said the “vast majority” are fully vaccinated.

Unvaccinated employees or those who haven’t shared their vaccine status will be placed on unpaid leave starting Nov. 20 and will be fired on Dec. 31 if they don’t get the required shots and/or advise of their status by then.

To help fill gaps left by employees who are removed from work, the TTC said it will invite recent retirees back to work on a temporary basis, continue increasing the hiring of new operators, and re-deploy operators who are normally responsible for moving vehicles between divisions to regular service.

Capital constriction projects will also temporarily be deferred as will weekend and nightly early closures to allow shuttle bus operators to be moved to regular service.

“After a review of current staff vaccination compliance numbers, the TTC is confident there will be no service impacts as a result of workforce availability in other work groups,” the statement said.

The TTC said if more employees come forward and report that they are vaccinated, service will be increased.

“We are moving quickly to hire operators and backfill job openings, and we will begin returning service to budgeted levels as soon as possible,” TTC CEO Rick Leary said.

“I stand firmly behind our vaccination policy. It is the right thing to do to protect the health and safety of our employees, their families and the communities we serve.”