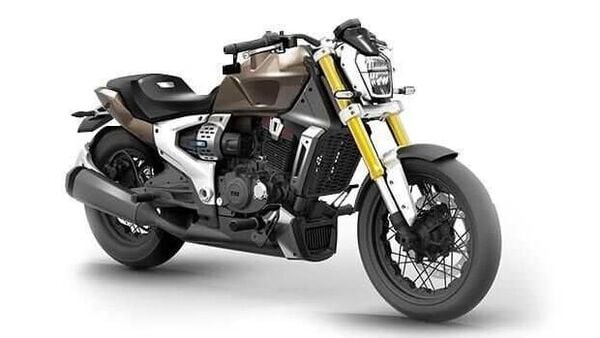 The production version of the TVS Zeppelin R cruiser is likely to source its engine from the much popular Apache series of bikes.

Showcased at the 2018 Auto Expo as a concept, the TVS Zeppelin R cruiser is likely to see the light of day soon, claim reports. While originally the concept featured a high-tech mild-hybrid powertrain, the production version could in fact come with an Apache series-sourced engine which will help the company to save the input costs.

TVS Motor Company had also previously trademarked the Zeppelin R nameplate in India indicating that it is interested in bringing the concept to life. However, the company has done a commendable job by staying under the radar as no prototypes have been spotted so far that can confirm its official plans. While a TVS test unit was in fact spotted a few weeks back, it was more of a Yamaha FZX rival instead of being a cruiser.

The Zeppelin R concept showcased at the event featured a low-slung cruiser form factor and a single-piece stepped seat. However, unlike typical cruisers, it had a flat handlebar setup lending it a slightly sporty riding posture. Other exterior highlights included a hexagonal headlight assembly with integrated LED DRLs and chunky USD forks finished in gold colour. The concept also featured black-dipped wire-spoke wheels. As well as a single disc at both ends along with dual-channel ABS. The concept was seen finished in a brown shade however the future production model could be seen in an array of new paint schemes.

While there is no official confirmation yet, the model is very likely to chuck the 220 cc mild-hybrid engine in favour of an engine from the Apache series. It could probably feature a 312 cc engine from Apache RR310 which will make it comparable with the existing sub-400cc models from Honda, Royal Enfield and Jawa.