The Queen‘s balcony ban for Prince Harry, Meghan Markle and Prince Andrew has left more than 30 royals out in the cold at the Platinum Jubilee, after the announcement that only working royals will make the cut.

The balcony appearance, which is often seen as the centrepiece of major royal occasions, including Trooping the Colour and weddings, usually sees the Queen’s extended family gather to watch a flypast and is a rare chance for fans to see the entire extended family together.

Following his ejection from public life, after settling a civil court case in America over allegations of sexual abuse against Virginia Giuffre (which he vehemently denies), it was inconceivable that Prince Andrew would be given a spot, and despite earlier claims that the Queen offered Prince Harry and Meghan Markle a space on the platform, they too have been left off the list.

However, in paring the list down to just 16 people to avoid potential diplomatic pitfalls, the Queen has been forced to omit a number of well-liked family members including her much-loved grandchildren and their families.

Her cousins, including Prince Michael of Kent, and their families, with whom the Queen enjoys a warm relationship are also out in the cold, with a total of at least 34 royals absent from the balcony.

Their father’s absence means that Princess Eugenie and Princess Beatrice will not appear with their husbands and children.

Their cousin Peter Philip’s would typically appear with his now ex-wife Autumn and their two daughters, and so the York sisters would reasonably have been expected to be joined by Eugenie’s husband Jack Brooksbank and Beatrice’s husband Edo Mapelli Mozzi – not to mention the sisters’ children Sienna and August, if they felt they weren’t too young.

Similarly the Queen’s other adult grandchildren, Peter Philips and Zara Tindall have been excluded with their families, even though their mother Princess Anne and stepfather Sir Timothy Laurence will join the Queen.

In a formal statement about the decision, Buckingham Palace said: ‘After careful consideration, The Queen has decided this year’s traditional Trooping the Colour balcony appearance on Thursday 2nd June will be limited to Her Majesty and those Members of the Royal Family who are currently undertaking official public duties on behalf of The Queen.’

Platinum Jubilee: Who will be missing from the balcony? Queen’s beloved grandchildren, great-grandchildren and close cousins will miss out on balcony appearance

6. OUT: Princess Michael of Kent

7. OUT: Prince Michael of Kent

14. IN: Duchess of Cambridge

15. IN: Duchess of Cornwall

37. IN: Prince Richard, Duke of Gloucester

38. IN: Duchess of Gloucester

41. OUT: George Windsor, the Earl of St. Andrews 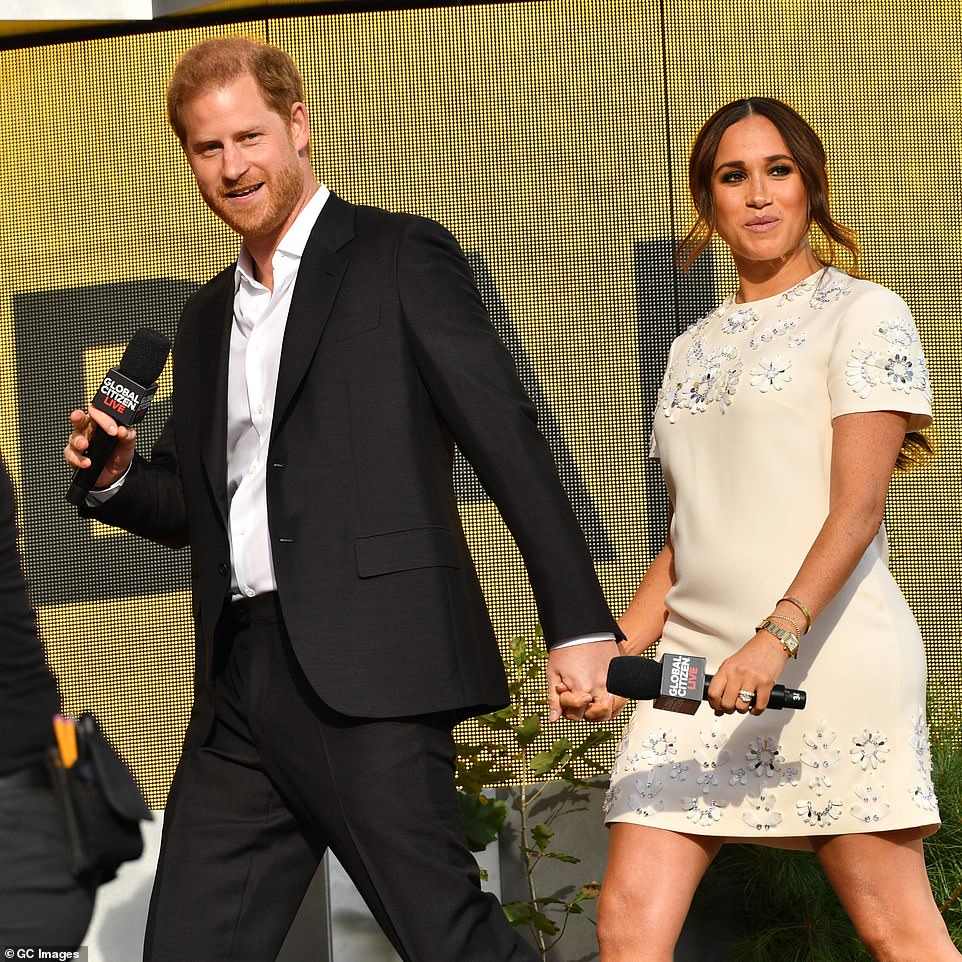 Prince Harry and his wife Meghan Markle, pictured here at Global Citizen Live in New York in 2021, will not appear on the balcony for the Platinum Jubilee 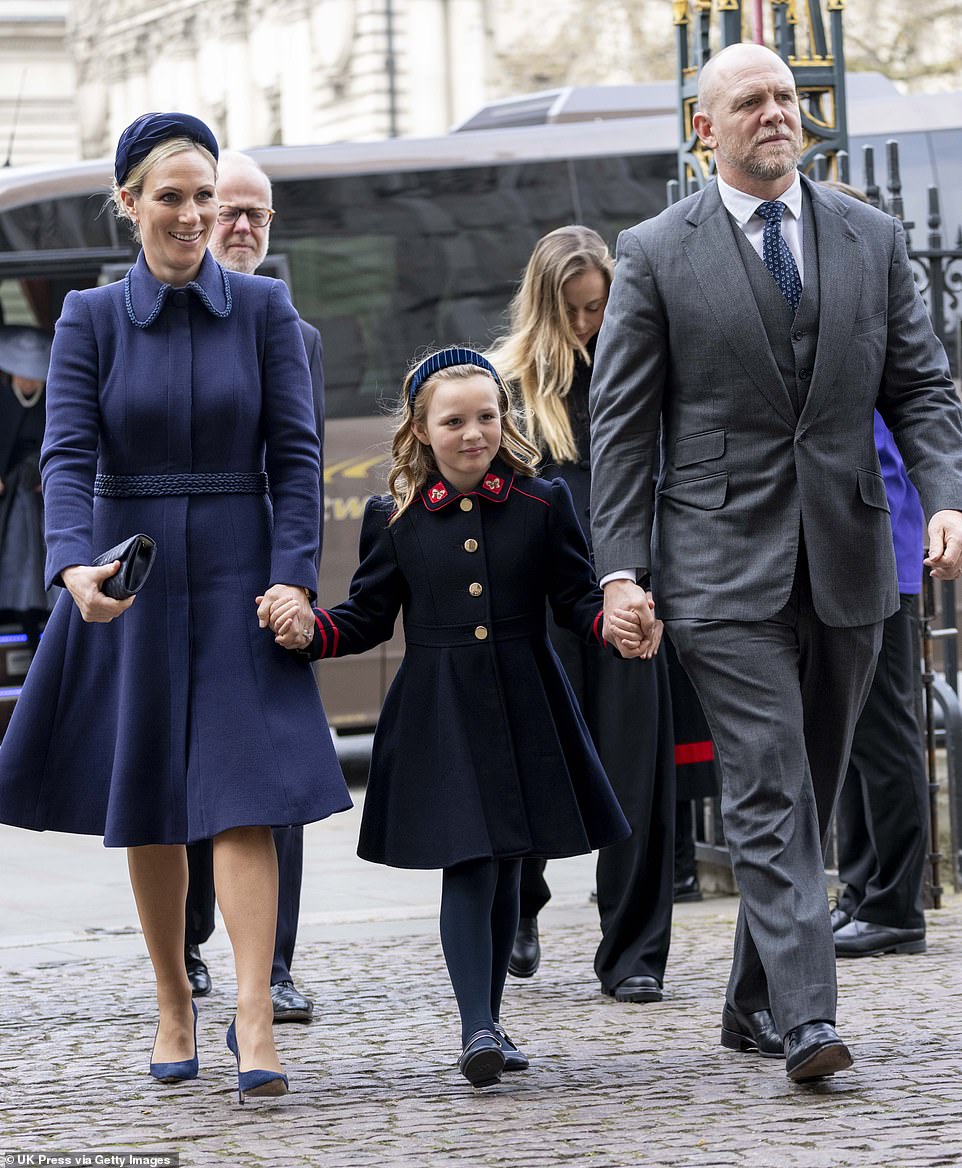 Zara Tindall (left), pictured with her daughter Mia and husband Mike Tindall, is among the royals who will not appear on the balcony following the Queen’s announcement

The announcement follows reports that her Majesty herself may not appear on the balcony, due to the 96-year-old’s limited mobility.

It is believed that aides are working on a ‘plan B’, with an insider saying: ‘It could still happen but it is by no means guaranteed that we will see the Queen on the balcony during the Jubilee.’

While recent balcony appearances have been more focused on senior members of the Firm, normally, there are no restrictions on which of the family will be present for Trooping of the Colour.

Harry and Meghan today pledged to be in Britain with their children for the Queen’s Platinum Jubilee next month – in a bombshell announcement released just minutes after Her Majesty banned them and Prince Andrew from the Buckingham Palace balcony.

The defiant Sussexes have finally revealed that they will fly in from California with Archie, three today, and Lilibet, 11 months, to attend celebrations marking the monarch’s extraordinary 70 years on the throne that begin on June 2.

They spoke out moments after Her Majesty delivered an extraordinary snub to them and her son the Duke of York by not inviting them to the balcony for the Trooping the Colour – the spectacular start of her Platinum Jubilee long weekend.

The 96-year-old monarch’s decisive action to only include royals carrying out official public duties, such as Harry’s father and brother, for the Buckingham Palace parade was taken by her ‘after careful consideration’ – yet there are exceptions for some of Harry’s fellow grandchildren and some of the Queen’s great-grandchildren including George, Charlotte and Louis.

‘The Queen has decided this year’s traditional Trooping the Colour balcony appearance on Thursday June 2 will be limited to Her Majesty and those members of the royal family who are currently undertaking official public duties on behalf of the Queen’, a palace spokesman said.

But it is understood the Sussexes have been invited to other jubilee events – likely to include the service of thanksgiving at St Paul’s Cathedral on Friday June 3. Andrew is also expected to be there.

The symbolic Trooping the Colour ban will be widely viewed as a rejection of Harry and Meghan, who quit the monarchy for a new life in the US two years ago, and to Andrew, who was cast out of the institution over his civil sexual assault case that saw him hand £12million to one of Jeffrey Epstein’s sex slaves.

Royal biographer Tom Bower told MailOnline that the Queen had ended the ‘mystery farce created by the Sussexes’ about whether they would be on the balcony – but warned the couple, who have a big money deal with Netflix, may try to ‘milk’ the jubilee.

He said: ‘They [Harry and Meghan] have been forced to accept a downgraded role – grouped with all the other VIP’s – but are clearly desperate not to be excluded. If the Palace is not remarkably careful, the Sussexes will milk the celebrations for their own benefit. Hopefully, the Sussexes will be kept firmly in check to avoid their selfish interests dominating the celebration of the Queen’s awe-inspiring service to Britain’.

Royal author Angela Levin said the Queen had made a ‘great decision’ to restrict the balcony to working royals, adding: ‘It will have such a different positive atmosphere if there are working royals who support Her Majesty.’ On the Sussexes’ decision to attend other events she said: ‘The focus will be on them and how they behave, which the Jubilee shouldn’t be about’.

The event on June 2 will kick start the four days of Jubilee festivities, with 18 members of the royal family set to gather on the famous frontage, with the Queen ‘looking forward’ the weekend of celebrations.

The Sussexes and the Duke of York will not be on the balcony with her for the sovereign’s official birthday parade. But there are exceptions, with Prince Anne’s husband Vice Admiral Sir Tim Laurence, who is not a working royal, and various grandchildren and great-grandchildren including William and Kate’s children George, Charlotte and Louis. But there is no invite for Prince Andrew’s daughters Princesses Beatrice and Eugenie.

The Palace spokesman added: ‘In addition the Cambridge and Wessex children are also expected to appear as is Sir Tim Laurence, who the Queen is happy to attend as a frequent attendee and support for the Princess Royal on official engagements.’

Experts said that today decision should be viewed as a victory for Prince Charles and Prince William – and as proof the Sussexes are ‘excluded from The Firm’ and Andrew has been ‘ordered to disappear’.

Harry’s decision to acrimoniously quit as a working royal and spend the last two years making a string of damning accusations against his family from across the Atlantic is understood to have caused the Queen great heartache. It is also said to have caused major rift with Prince William and Prince Charles, who may have been consulted about today’s bombshell decision.

Sky News royal commentator Alastair Bruce said: ‘I think that this Jubilee focuses so much upon her life and her life of service, and in a changing world it’s probably very sensible that the working members of the Royal Family who support the Queen in her duties are on the balcony at such a key moment.

‘In the past it’s always been quite well-filled with people who are part of her family, and many of them have never really been identified or known by a large number of the people who gather and watch from outside.

‘But the Palace itself is going through an enormous amount of renovation – particular the front that we know and see when you drive past – and it probably is very sensible to reduce the number of people walking through what is in fact a bit of a building site.

‘We’re getting quite close to the celebrations and there’s much being organised, and the Queen has had many of her staff looking very closely at what the best way to run each part of it is.

‘At essence, this is about celebrating the Queen’s 70 years as sovereign. And I think the Palace will want to make sure that we focus on that and don’t get distracted by all the noise that has come about over the last years about various members of her family and that this will perhaps focus everyone’s mind on the people who are committed.’

It may be that Harry’s most recent interview with US TV, in which he claimed he wanted to ‘protect’ the Queen and flew to Windsor in secret to check she had the right people around her, may have contributed to today’s decision.

Speaking during the Invictus Games last month, Harry insisted that he did not know if he, Meghan, Archie and Lilibet would return to the UK to celebrate the Queen’s Platinum Jubilee, saying there are ‘security issues and everything else’. The Duke of Sussex has taken the Home Office and the Met Police to the High Court, claiming he no longer feels safe in Britain without 24/7 armed bodyguards.

While the Queen is undoubtedly very fond of her grandson, his behaviour since emigrating, including accusing his own family of being racist towards Archie as well as the threat posed by his forthcoming memoirs – means not all members of the family may have been happy if they came.