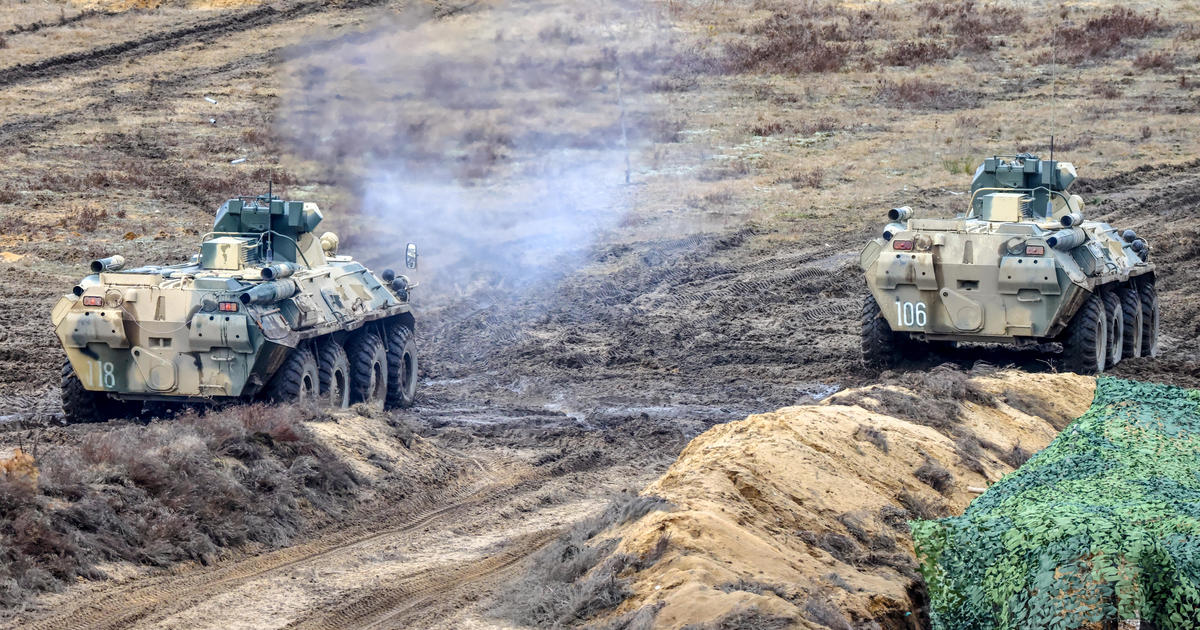 Washington — The U.S. has intelligence that Russian commanders have received orders to proceed with an invasion of Ukraine, with commanders on the ground making specific plans for how they would maneuver in their sector of the battlefield, CBS News national security correspondent David Martin reported on “Face the Nation” Sunday.

The intelligence indicates that “they’re doing everything that American commanders would do once they got the order to proceed,” Martin said.

After weeks of warning that a Russian invasion of Ukraine was imminent, President Biden told reporters Friday that he’s “convinced” Russian President Vladimir Putin had made the decision to invade Ukraine and said the U.S. believes Russian forces intend to attack in the “coming days.”

Secretary of State Antony Blinken told “Face the Nation” that the U.S. believes Russia is “moving forward” with plans to invade, despite denials from Moscow that such action will be taken.

“Everything we’re seeing tells us that the decision we believe President Putin has made to invade is moving forward,” Blinken said. “We’ve seen that with provocations created by the Russians or separatist forces over the weekend, false flag operations, now the news just this morning that the ‘exercises’ Russia was engaged in in Belarus with 30,000 Russian forces that was supposed to end this weekend will now continue because of tensions in eastern Ukraine, tensions created by Russia and the separatist forces it backs there.”

Russia has massed roughly 150,000 troops, warplanes and equipment on Ukraine’s three sides, escalating tensions with the neighboring country. The defense minister of Belarus also announced Russia will be extending military drills taking place in the country near Ukraine’s northern borders, which brought a large contingent of Russian troops to Belarus.

In anticipation of an attack, the U.S. and other allies, most recently Germany and Austria, have urged their citizens to leave the country. The U.S. Embassy in Ukraine also temporarily relocated its operations from Kyiv to Lviv due to the acceleration in the buildup of Russian forces.

While top U.S. officials have warned Russia is poised to strike Ukraine and the Pentagon has sent roughly 5,000 troops to Eastern Europe to bolster NATO forces, the Biden administration continues to keep a diplomatic option on the table. The president has stressed no American forces would go into Ukraine if Russia invades.

“My job as a diplomat is to leave absolutely no stone unturned and see if we can prevent war, and if there’s anything I can do to do that, I’m going to do it,” Blinken said Sunday. “President Biden has made very clear that he’s prepared to meet President Putin at any time in any format if that can help prevent a war. Even if the dye is cast, until it’s settled, until we know that the tanks are rolling, the planes are flying, and the aggression has fully begin, we’re going to do everything we can to prevent it but we’re prepared either way.”

Ukrainian President Volodymyr Zelensky, too, has called on Putin to meet with him to work to resolve the crisis, but he also criticized Western leaders gathered at a security conference in Munich on Saturday, arguing they should not wait for an attack to hit Russia with sanctions.

The Biden administration has warned that if Putin orders an attack on Ukraine, there would be steep consequences for Russia, and Blinken said Sunday that slapping Russia with sanctions now would mean the loss of the “deterrent effect.”

“Once you trigger the sanctions, you lose the deterrent effect,” he said. “As long as there is still even a minute’s worth of time in which we can deter and prevent a war, we’re going to try to uses it.”

Blinken added that the U.S. doesn’t want to detail its plans publicly, as “that will forewarn Russia.”