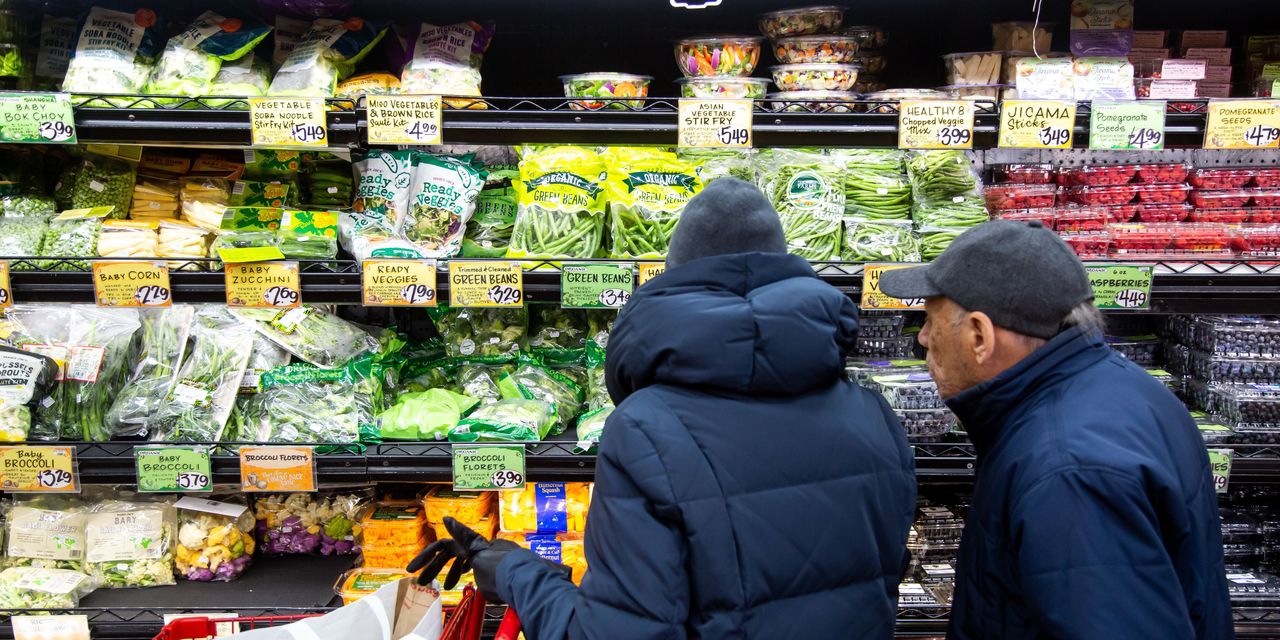 U.S. inflation eased in December for the sixth straight month following a mid-2022 peak as the Federal Reserve aggressively raised interest rates and the economy showed signs of cooling.

The consumer-price index, a measurement of what consumers pay for goods and services, rose 6.5% last month from a year earlier, down from 7.1% in November and well below a 9.1% peak in June.

Core CPI, which excludes volatile energy and food prices, climbed 5.7% in December from a year earlier, easing from a 6% gain in November. Many economists see increases in core CPI as a better signal of future inflation than the overall CPI. Core prices increased at a 3.1% annualized rate in the three months ended in December, the slowest pace in more than a year and down from 7.9% in June.

The figures are likely to keep the Fed on track to reduce the size of increases to its benchmark federal-funds rate to a quarter-percentage-point at their meeting that concludes on Feb. 1.

Easing inflation follows several signs that U.S. economic activity cooled in late 2022. U.S. imports and exports fell in November from October, while retail sales, manufacturing output and home sales all declined. Job and wage growth slowed in December, though the labor market remained tight with historically low claims for unemployment insurance at the start of the year.

“The December CPI report was welcome good news after a very bad patch for inflation,” said

chief economist at Comerica Bank. He said consumers are getting relief from lower gasoline prices and moderating food prices, as well as declining prices for other goods.

On a monthly basis, the CPI fell 0.1% in December, due to sharply falling energy prices. That compared with a gain of 0.1% in November and 0.4% in October. Food-price increases also slowed last month. Core CPI rose 0.3% in December, up from November’s 0.2% rise but down from 0.6% increases in August and September.

Goods prices, a key driver of inflation over the past year and a half, fell for the third straight month in December as prices fell for products such as autos, computers and sporting goods.

Improving supply chains and reduced demand have relieved price pressures on goods, but services prices continued to climb in part because of wage gains in a tight labor market.

Some economists worry that still-high wage growth could keep consumers flush with cash and companies eager to raise prices to compensate, holding inflation above the Fed’s 2% target.

“Taming services inflation will be the Fed’s biggest challenge this year,” said

Shelter prices rose 7.5% in December from a year earlier, the Labor Department said, and a broader measure of services prices that excludes utilities rose 7% during the same period. Both increases were the biggest since 1982.

Inflation remained high across the globe in November, though it abated during the month, the Organization for Economic Cooperation and Development said Tuesday. Consumer prices across the Group of 20 largest economies—which contribute four-fifths of economic output worldwide—rose 9% from a year earlier in November, down from October’s 9.5% increase, the first drop in the G-20 inflation rate since August 2021.

Prices rose sharply in 2021 as the U.S. economy rebounded from the Covid-19 pandemic, powered by pent-up consumer spending that got a boost from low interest rates and government stimulus. Snarled supply chains fueled higher prices for many goods. Russia’s invasion of Ukraine in early 2022 also tightened supplies of energy and other commodities, further stoking inflation worldwide.

Inflation pressures on goods dissipated last summer as supply chains improved and energy prices fell. Shipping costs from China to the West Coast are near prepandemic levels. Gasoline prices have declined, with the national average price of regular unleaded gasoline at $3.27 a gallon on Thursday, down about 50 cents a gallon from mid-November, according to OPIS, an energy-data and analytics provider. Gasoline prices peaked in mid-June at a record $5.02 a gallon.

“Logistics prices have also slowed materially, shipping costs are back to where they were pre-Covid,” said

“The alleviation on the cost side is creating the wherewithal to discount more aggressively as we head into 2023.” 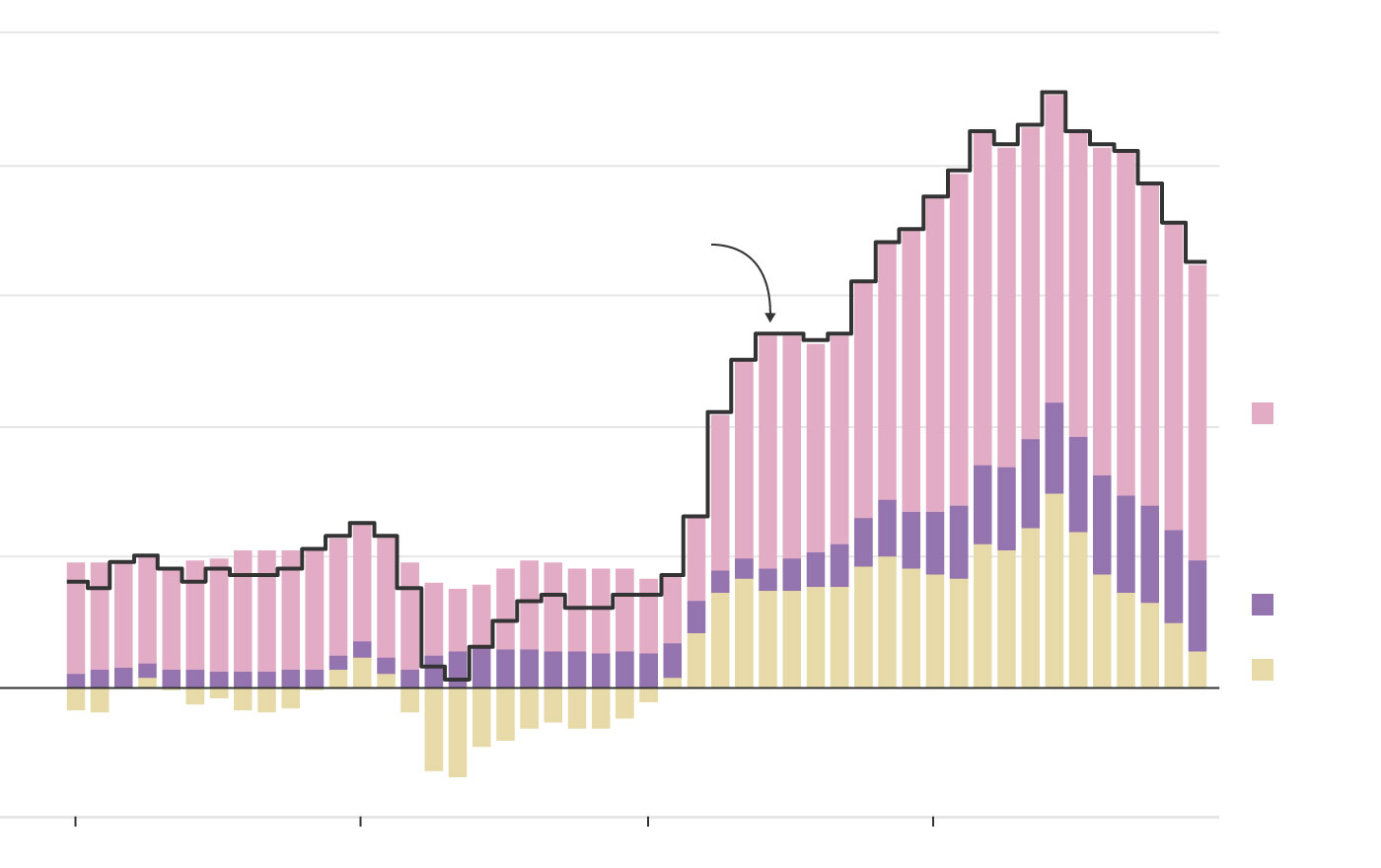 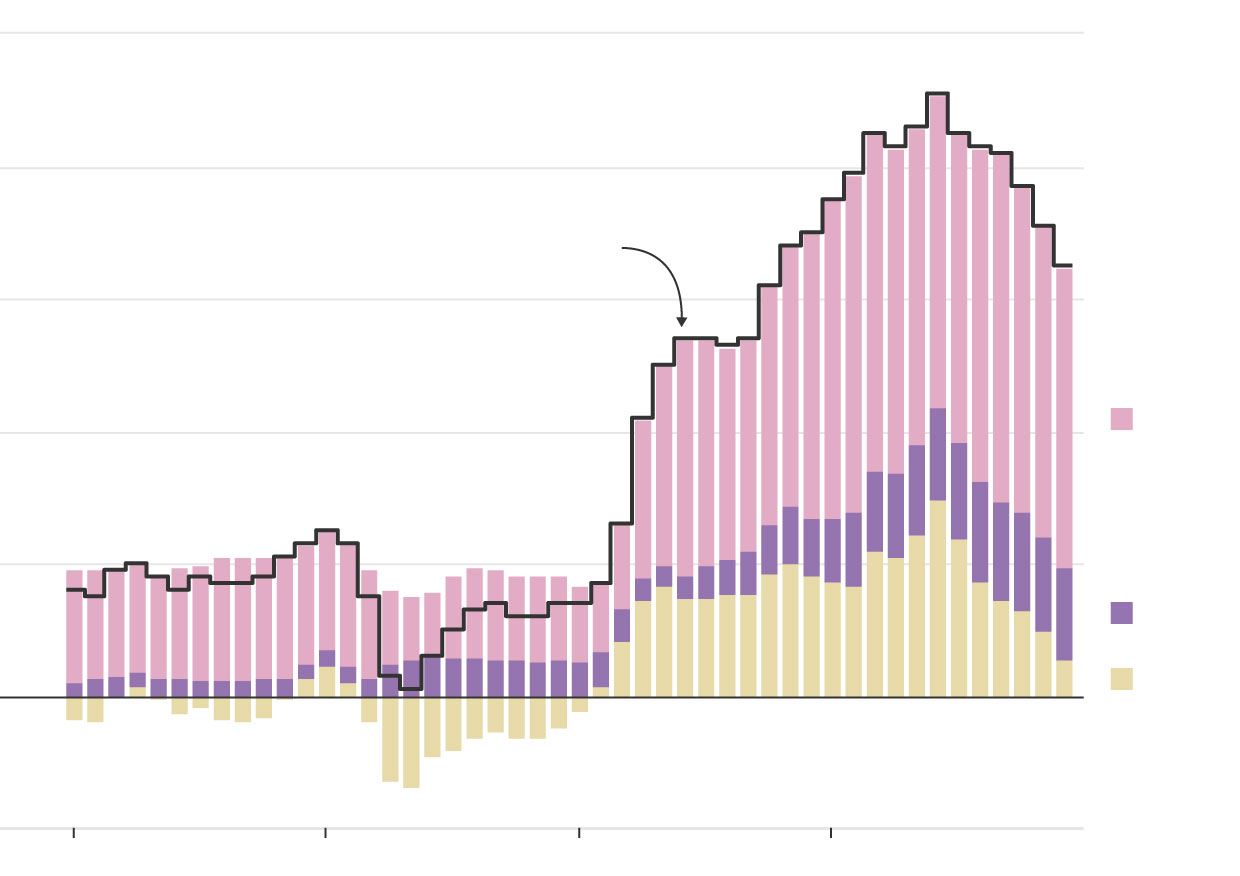 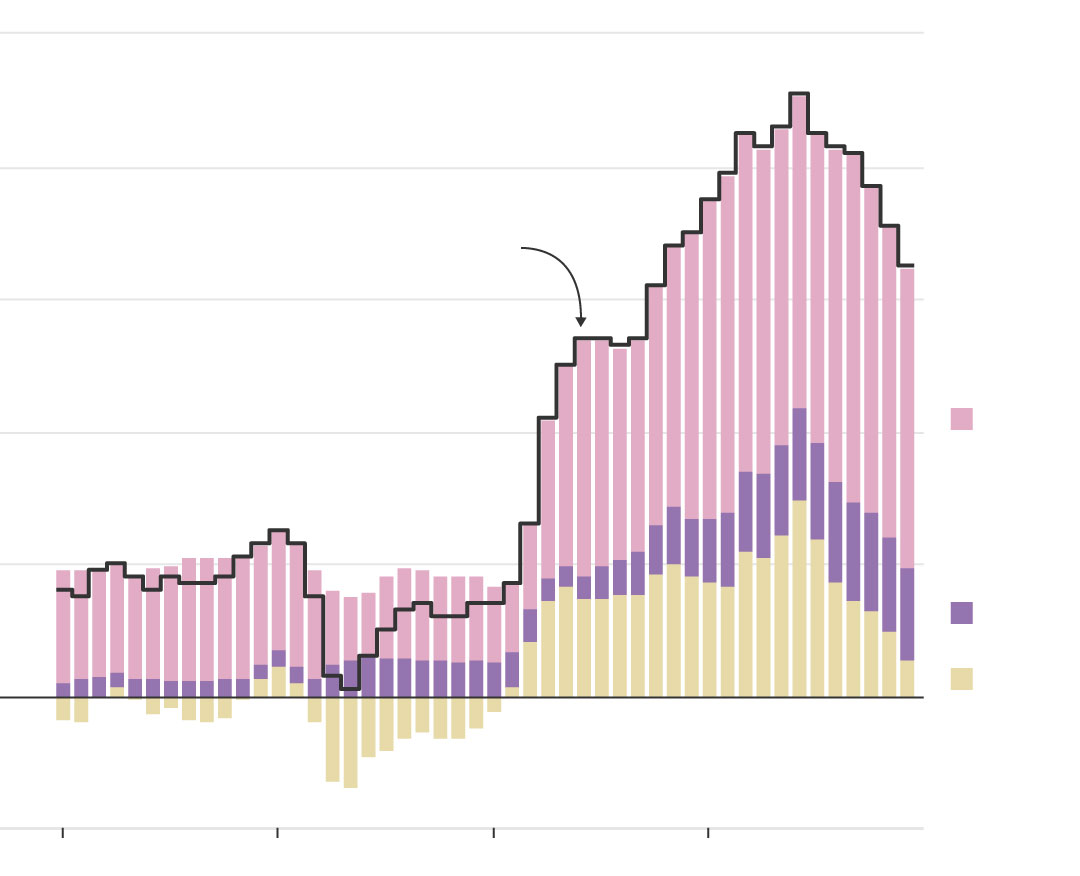 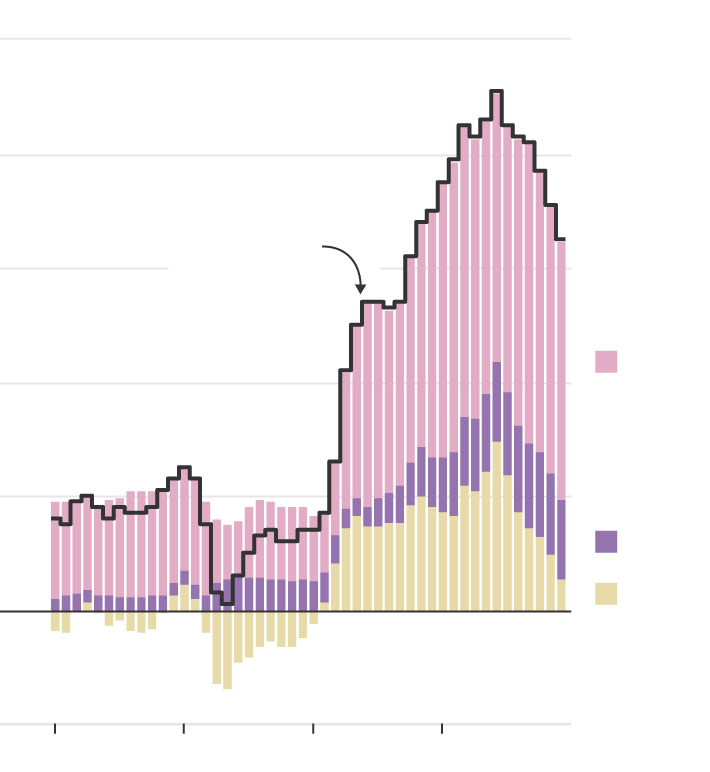 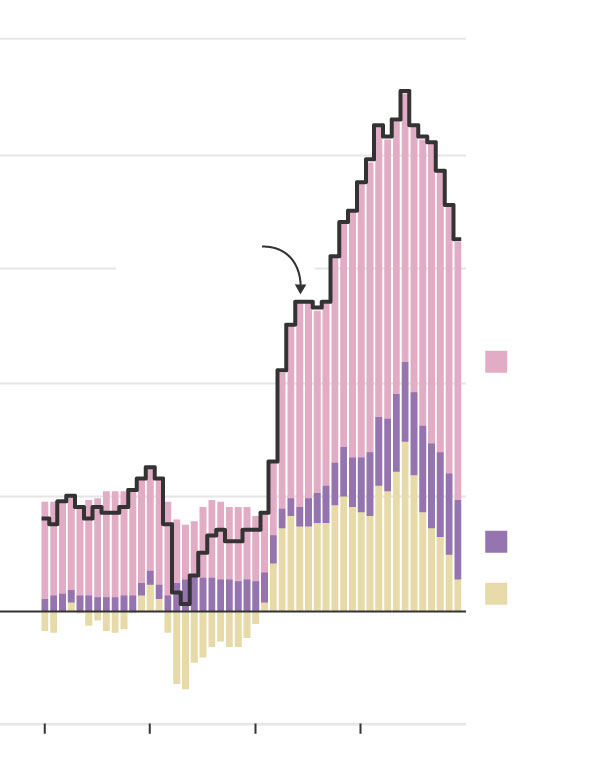 The clearest impact of Fed tightening so far is in the housing market. Existing-home sales fell in November for a 10th straight month as high mortgage rates boosted buyers’ costs.

a 33-year-old tech salesman, said the shift to remote work after the pandemic hit allowed him to move to Asheville, N.C., where he has easy access to hiking, fishing and other outdoor activities.

The move proved expensive, though. After losing out to cash buyers in bids for existing homes, Mr. Snowden signed a contract in September 2021 to buy a newly constructed property. By the time his home was completed the following June, mortgage rates had doubled. On top of that, the construction company told him that he was on the hook for an extra $25,000 to offset unexpectedly high costs for concrete, labor and other items—or he could back out of the contract.

At that point, Mr. Snowden said, he was already selling his old house and had made plans to move, so he wasn’t going to back out. “So much was already in motion,” he said. Between the higher mortgage rates and the additional costs, the monthly mortgage payment increased $200, he said.

—Austen Hufford contributed to this article.

Write to Gwynn Guilford at gwynn.guilford@wsj.com