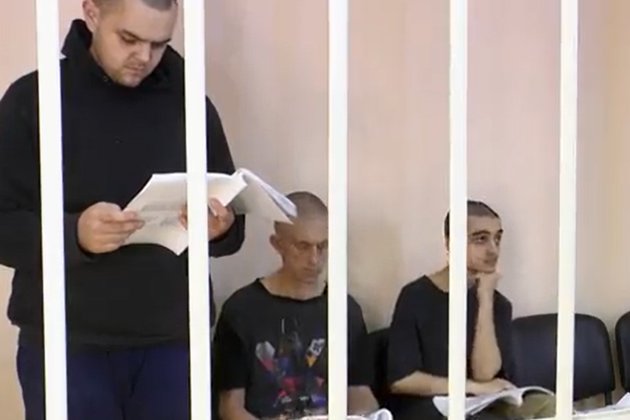 The shocking news that two Britons fighting with the Ukrainian armed forces who were captured after the siege of the Azovstal steelworks in Mariupol have been sentenced to death brings to mind the bad old days of the Soviet Union, when thousands who fell foul of Stalin were condemned after show trials which had more to do with political expediency – or the whim of the leader – than any notion of justice.

The two men, Aiden Aslin and Shaun Pinner, were convicted on the charge of “being a mercenary” whose actions had “led to the deaths and injury of civilians, as well as damage to civilian and social infrastructure”. But they had apparently both been fighting in the regular Ukrainian army for at least six years, and Aslin had reportedly taken Ukrainian nationality, which would appear to contradict this verdict straight away.

Lawrence Hill-Cawthorne, an expert in international law at the University of Bristol Law School, sets out various ways in which this trial appears to have violated the two men’s rights under the laws of war.

The men were tried in a court in the self-proclaimed People’s Republic of Donetsk, which appears to be little more than a puppet of the Kremlin. But the Russian media has gone to town on the verdict, saying it reflects “the main, unshakeable principle – justice”. And if we’ve gleaned anything by now about Vladimir Putin’s “military operation” in Ukraine, it is that pro-Kremlin propaganda has an extremely receptive audience in modern-day Russia.

This is our weekly recap of expert analysis of the Ukraine conflict. The Conversation, a not-for-profit news group, works with a wide range of academics across its global network to produce evidence-based analysis. Get these recaps in your inbox every Thursday. Subscribe here).

Which is, in a sense, how we got here in the first place and which goes some way to explaining the seemingly indiscriminate attacks on civilians and non-military infrastructure since the war began. Speaking on the BBC’s Sunday Morning programme last weekend, former war crimes prosecutor Sir Howard Morrison (who is now an advisor to the Ukraine government) said he was concerned that genocide was “on its way” in Ukraine. He explained how “genocide is often rooted in the way that one nation or one ethnic group views another and how it describes them”.

Kseniya Oksamytna of City University in London, whose research has included the causes of atrocity in war, has tracked the way generations of Russians have been taught that Ukrainians are inferior and Ukraine not a real country – and suggests that these attitudes may make it easier for Russian soldiers to commit war crimes and atrocities.

Read more: Ukraine: Russian attitudes to Ukrainians can help to explain the atrocities

Latest news from the battlefield

Meanwhile the Russian assault on the east of Ukraine forges on with horrific casualties on both sides. Ukraine’s president, Volodymyr Zelensky, continues to beg for more and better weapons systems to counter Russia’s deadly artillery dominance. There was some good news last week when both the US and UK committed to supplying a number of longer-range missile systems with a range of about 50 miles.

University of Portsmouth military strategist Frank Ledwidge explains the role of artillery in Russia’s military doctrine and says that, while these new weapons will not win the war for Ukraine, a sufficient supply of them could prove to be extremely bad news for the Russian military.

Read more: Ukraine war: the US and UK missile systems which will challenge Russia’s artillery dominance

There’s been plenty of action on the diplomatic front too. We heard recently from Nixon-era US secretary of state Henry Kissinger, who commented last month that Ukraine may need to be prepared to cede territory to Russia, while the French president, Emmanuel Macron, has weighed in with a warning that Ukraine and the west must be careful not to “humiliate” Russia.

But Birmingham University’s Stefan Wolff and Tatyana Malyarenko of the National University of Odesa argue that international pressure must be brought to bear on Russia – not on Ukraine – if there’s to be a lasting settlement, rather than just a quick one.

Read more: Ukraine: international pressure needs to be on Moscow, not Kyiv

One of the factors driving the urgency with which the international community wants to bring an end to hostilities in Ukraine (rather than just the wholesale slaughter of innocent Ukrainian civilians, that is) is the severe disruption to the world’s food supply the war is causing.

Ukraine Recap is available as a weekly email newsletter. Click here to get our recaps directly in your inbox.)