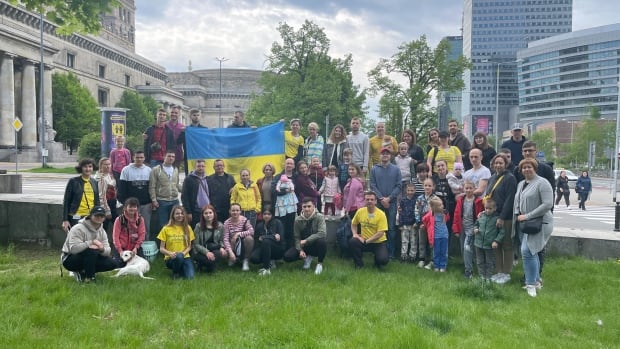 It was less than a month after Russia invaded Ukraine when Kelly Power got a message from an old friend asking if she’d take in her 16-year-old brother — if he could make it to Newfoundland.

The boy was in Ukraine, and his sister was trying to get him out. She’d lived in Newfoundland and worked with Power at a pharmacy four years before. They got along and stayed friends, even after the sister moved away.

Power, 52, said she didn’t think twice about agreeing to take the boy in.

“If I said no, he wouldn’t have anywhere to go,” she said in a recent interview with the Canadian Press. “I was his way out.”

The teenager is now scheduled to arrive in St. John’s on Monday, aboard a plane from Poland chartered by the provincial government and carrying up to 175 Ukrainian refugees.

The flight is part of a massive effort led by the provincial government and buoyed by a network of unaffiliated volunteers — and people like Power — who are working to bring Ukrainians to Canada’s easternmost province and ensure they’re safe, housed and cared for.

Newfoundland and Labrador opened a satellite office in Warsaw, Poland in March to help Ukrainians fleeing Russian attacks resettle in the province, beating Ottawa to the punch by almost two months.

Prime Minister Justin Trudeau announced Thursday the federal government would open an office in Warsaw to help Ukrainians come to Canada, and made a surprise visit to the capital city of Kyiv on Sunday to formally reopen the Canadian Embassy.

Newfoundland and Labrador Immigration Minister Gerry Byrne insists the plane arriving Monday is the first government-chartered flight to bring Ukrainian refugees to Canada. His department had not confirmed how many would be on board as of Sunday evening, but a spokesperson said Friday 175 was the “working number.”

Preparing for arrival and sending aid

Power gets emotional as she talks about the teenager arriving Monday — whose name The Canadian Press has agreed not to publish — and all of the things he’ll need: clothes, bedding, help with his English and friends.

She said his sister worked hard with the team at the Newfoundland and Labrador office in Warsaw to get him a visa, a passport and a way out of Ukraine and into Poland to make the flight.

The trip to St. John’s will be difficult, Power said: he’s leaving his parents behind, as well as his dog. He’s never been on a plane and he only just turned 16.

Adilya Dragan was preparing a box of clothes and supplies for the teenager on Friday afternoon.

The 32-year-old from Russia lives just outside St. John’s, and she moderates a Facebook group dedicated to sending medicine and supplies from Newfoundland to Ukraine.

Now, the group is also dedicated to helping the refugees who will arrive on Monday’s flight.

Dragan said she receives dozens of Facebook messages every hour from Ukrainians and those looking to help them. She’s built a spreadsheet tracking the Ukrainians who’ve contacted her to say they’re on Monday’s flight, and matching them with volunteers offering furniture, clothes or a place to live. Several rooms of her home are overrun with piles of donated supplies, and she’s arranged public drop-off sites where more stuff awaits.

Dragan and her team of volunteers are putting together boxes of clothes, shoes, food, toiletries, dishes and dish soap, and they’ll be at the airport Monday with a customized package for everyone on her list, and other items for everyone else on the plane.

“We’ll have a billboard and some brochures,” she said. “And once the people come out, we will be greeting them in Ukrainian and handing them out information so they can reach out to us and tell us what they need.”

“People are great here,” she said. “I love Newfoundlanders; they are the greatest people. You cannot find these people anywhere else in the world.”

The mother of three has her own full-time job, and she said all the work sending aid to Ukraine and prepping for the refugees’ arrival has become a second full-time job.

“My husband, he has family in Ukraine, and my best friend is Ukrainian,” Dragan explained. “I just want to help.”

Meanwhile, a woman from Irpin, a suburb just outside of Ukraine’s capital of Kyiv, has some advice for those landing in St. John’s on Monday.

Galyna Velychko knows first-hand what it was like to uproot her life and flee for safety after spending the early days of the Russian invasion debating whether or not to leave.

She told CBC News as Russian tanks began to descend on neighbouring Bucha, about 30 kilometres west of Kyiv, she made a break for the Polish border.

“It was a really hard decision and she’s still experiencing post-traumatic stress. She’s crying every day. She’s seeing her house in her dreams,” said her daughter, Nadiya Butt-Velychko, acting as a translator during the interview.

“It’s terrible. It’s really difficult. But she’s hoping for better. She made this decision to come here for her own sake, for her mental health, to just try to recoup and try to get as much as possible a stress-free life.”

Galyna Velychko has since been living in Harbour Grace for about a month, a place her daughter has called home for years.

She said the adjustment hasn’t been easy and was devastated to learn her community, home and workplace was destroyed.

Since landing in Newfoundland, Galyna Velychko began meeting people in Harbour Grace, started to learn English and even landed a job at a local grocery store.

Her daughter said she was proactive within her first week in Harbour Grace, which allowed her mother to move forward with her life rather than thinking about home.

“It will be hard at first, but just think back to Ukraine and think of the people fighting there and people staying there. It’s much harder for them. Eventually, it will be better.”

A part of the community

The flight carrying about 175 Ukrainians seeking safety and shelter in Newfoundland and Labrador is slated to land in St. John’s Monday evening.

It marks the first government-led arrival since the province set up office in Poland in mid-March to attract those fleeing the conflict.

Byrne said the flight represents a “cross-section” of Ukraine, with single mothers, grandparents and more making their way to Newfoundland soil. Some on the flight are hitting the ground running and will be heading to their newly obtained jobs as early as Tuesday morning, said Byrne.

“We’ve really worked to develop a positive, confident, trusting relationship with those who are coming. It was never simply a matter of ‘fill out a form and we’ll get you on a flight,'” he said.

Short-term accommodations are in place, Byrne said, but he’s asking residents to give the new arrivals time and a “reasonable amount of space” after just fleeing their war-torn homes.

“Give them that respect,” he said.

Byrne said the travellers will be met by Canada Border Services, public health officials, the provincial office of immigration and the Association for New Canadians and its team of volunteers upon arrival.