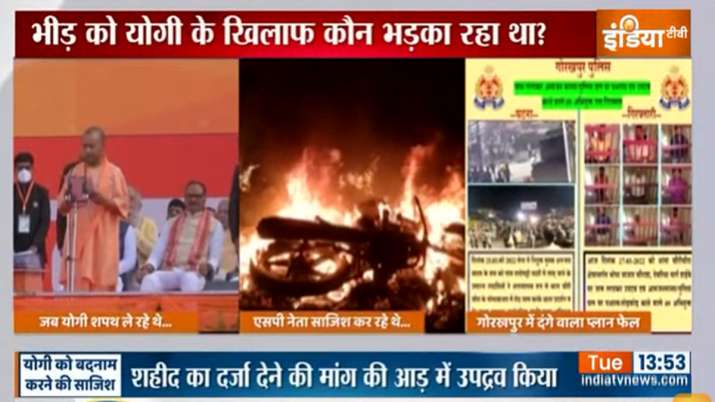 The Uttar Pradesh Police claimed to have unearthed a conspiracy to create unrest in Gorakhpur on the day of the swearing-in ceremony of Yogi Adityanath as the Chief Minister for the second term.

According to police, 14 people have been arrested in connection with the conspiracy and violence in Chauri Chaura where a crowd had blocked roads and rail tracks and protested to press for their demands with the dead body of soldier Dhananjay Singh on March 25. Yogi Adityanath took oath as the Chief Minister of Uttar Pradesh on March 25.

Police, however, took prompt action by firing teargas shells and taking control of the situation.

Police scanned the videos recorded using drone cameras to identify the rioters. Cases have been filed against 56 and 200 unidentified men. Several SP leaders have also been named.

According to the local intelligence unit’s report, a conspiracy was hatched to create unrest in the stronghold of Yogi Adityanath to give an impression that the law and order situation has collapsed in the state with the BJP forming government for a second term. The report said that those behind the conspiracy wanted to flare up riots.

Social media was used to mobilise the crowd and instigate the crowd against Adityanath, it said.

Several Samajwadi Party leaders and workers have also been booked under relevant sections for being part of the conspiracy. Those arrested include several leaders of Akhilesh Yadav’s party.

Police said that officials are scanning CCTV clips to identify the miscreants. Police said that raids and a massive manhunt are underway in Gorakhpur to arrest those involved in the conspiracy.

Police have also announced a cash reward of Rs 25,000 to anyone sharing the whereabouts of absconding SP leaders including Manurojan Yadav.

“Yes, there was planning to burn the entire UP. The Gorakhpur report is correct… identification and detailing is underway, they will be arrested soon,” Ravi Kishan, BJP MP from Gorakhpur, told reporters in Delhi.

“It is SP’s culture to spread unrest..this is why they lost (in the election). Action will be taken as per the law,” Minister Surya Pratap Shahi said.