Kartik Aaryan has been garnering praise from all quarters for the success of his latest release, ‘Bhool Bhulaiyaa 2’. The movie also starred Kiara Advani and Tabu in lead roles.

Vivek Agnihotri joined the bandwagon of celebrities who congratulated the team for the success of the movie at the box office. 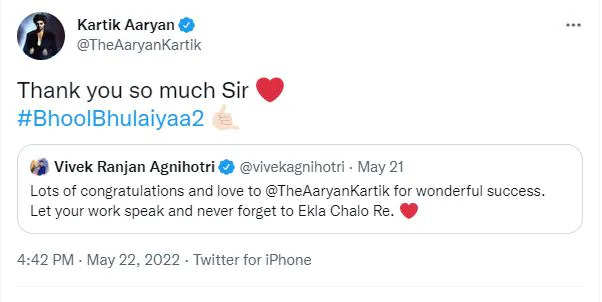 The filmmaker wrote, ‘Lots of congratulations and love to @TheAaryanKartik for wonderful success. Let your work speak and never forget to Ekla Chalo Re, followed by a heart emoji.’ Reacting to the tweet, Kartik Aaryan said, “Thank you so much Sir (red heart emoji) #BhoolBhulaiyaa2 (call me hand emoji).

The Kartik and Kiara starrer has reportedly grossed Rs 54.50 crore on its first weekend. The movie locked horns with Kangana starrer ‘Dhaakad’ at the box office as both the films released on the same day.

Directed by Anees Bazmee, this film is a sequel to Akshay Kumar and Vidya Balan starrer ‘Bhool Bhulaiyaa’ which released in 2007.