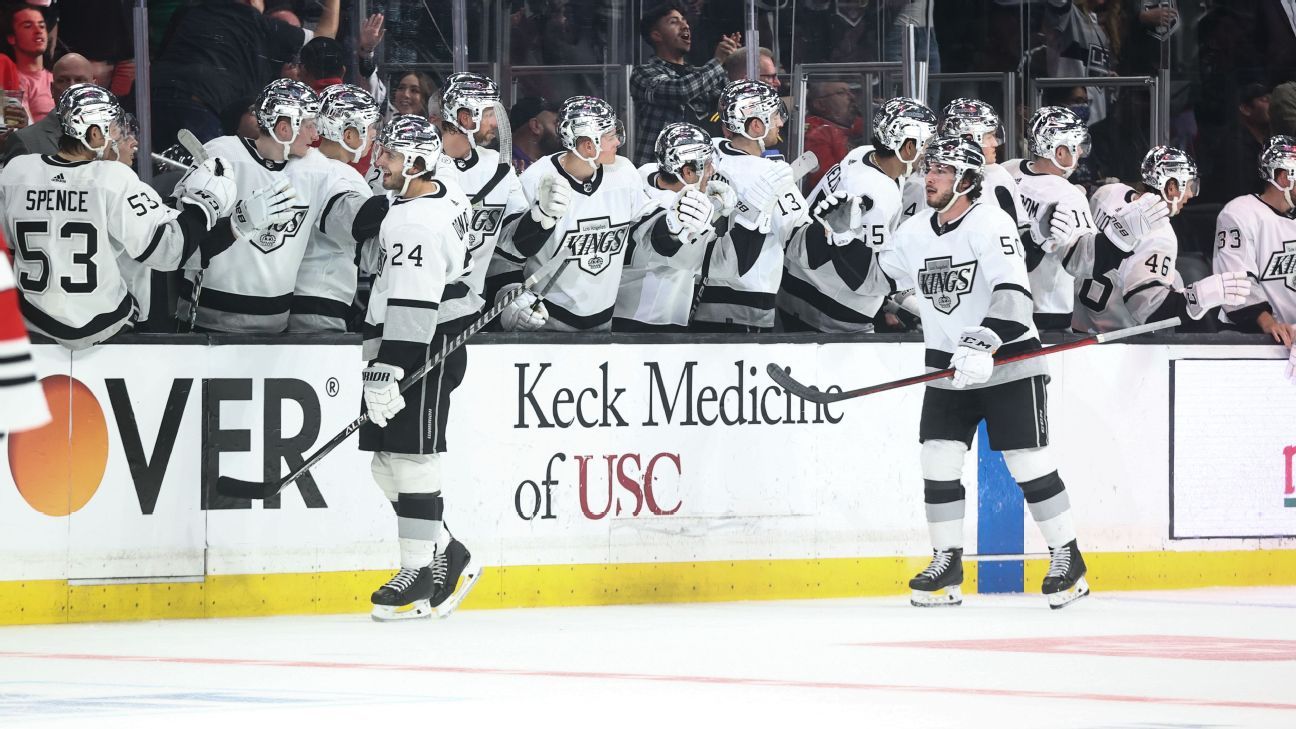 Every week, we’ll mine the waiver wire for lesser-rostered assets to help your squad, whether you favor dynasty or the redraft format, and we’ll also toss in some tips for DFS players out there. Finally, we will look at some former go-to fantasy assets who may be overvalued – in the short- or long-term – for one reason or another.

Phillip Danault, C, Los Angeles Kings (Rostered in 50.6% of ESPN.com leagues): The experienced center shoots the puck frequently and scores goal. That’s the meat of the fantasy matter. Danault also blocks more shots than your typical top-six skater. No member of the Kings’ forward corps has enjoyed a more fruitful March from a fantasy perspective, in averaging 2.0 points/game. Not Anze Kopitar, not Danault’s linemates Trevor Moore and Viktor Arvidsson, no one.

Joel Farabee, LW, Philadelphia Flyers (50.2%): There’s no ignoring what Farabee is rustling up in Philadelphia these days. Boosted to the Flyers’ top line, the third-year skater has four goals and six assists in his most recent eight contests. So, centering a Claude Giroux-less line with Cam Atkinson and James van Riemsdyk is where he should remain. With zero playoff aspirations, Philadelphia can only benefit from giving Farabee – who’s signed long-term – quality reps. There’s solid fantasy value to be mined here.

Evgenii Dadonov, RW/LW, Vegas Golden Knights (47.6%): Allow me my last fantasy pitch on behalf of the nearly expelled Vegas forward before giving it a rest. As discussed in last week’s post-trade-deadline summary, sometimes hurt feelings serve as sharp motivation. Since Dadonov wasn’t traded to the Anaheim Ducks, in spite of the Golden Knights’ best intentions and efforts, he’s scored two goals and three assists in two games. Both wins by a Vegas side desperate for every single ‘W’. Now skating on a top line with Jack Eichel, Dadonov should make a bit more productive noise before cooling off again. Something to prove and all that jazz.

Kailer Yamamoto, RW, Edmonton Oilers (15.3%): Even with a recovered Ryan Nugent-Hopkins back in the lineup, Yamamoto appears entrenched in his position in the Oilers’ top six; now alongside Leon Draisaitl and Zach Hyman, instead of Connor McDavid and Evander Kane. Still a good gig. The young winger posted seven goals and five assists through eight games before registering a goose egg Saturday in Calgary. Losing the role on Edmonton’s No. 1 power play hurts a little bit, but not enough to disregard Yamamoto as a solid asset in deeper fantasy leagues. And keep an eye on how Jesse Puljujarvi (33.7%) manages in his latest turn alongside McDavid up front. The 23-year-old winger enjoyed tangible success in that spot earlier this season.

Dylan Strome, C/RW, Chicago Blackhawks (14.8%): After hum-drumming it most of the 2021-22 campaign, the Blackhawks center is enjoying an uncharacteristically explosive month of March. Contributing at least a point in all but one of a dozen contests, Strome is already up to 10 goals and eight assists altogether. And Chicago still has a pair of contests to go before we slide into April. Competing on an even-strength line and power play with Patrick Kane and Alex DeBrincat, the 25-year-old RFA-to-be is averaging 2.8 fantasy points/game since February. It would be in his best interest to continue coasting in such fashion, considering there’s a fresh contract on the horizon. Grab the former OHL Erie Otter while the going’s hot.

Sean Durzi, Los Angeles Kings (6.1%): One of the reasons the Kings aren’t missing Drew Doughty as much as they might otherwise – and remain in second spot in the Pacific – lies with increased contributions from the rookie defender. Durzi is perceivably stepping up in all facets of the position during Doughty’s enduring absence from a blue line that’s also missing Sean Walker, Matt Roy, and Mikey Anderson. Along with his solid collection of shots, hits, and blocked-shots, Durzi’s nine points in March help round out an average of 2.3 fantasy points/game. Not bad for a 23-year-old, only 49 contests into his NHL career. The top pair/No. 1 power-play commodity is a solid addition in these waning weeks, especially with Doughty sidelined indefinitely.

James Reimer, San Jose Sharks (24.0%): The pressing concern being the Sharks aren’t likely to win a ton of games down the stretch. But they’ll probably emerge victorious in a few more than otherwise with Reimer between the pipes. The veteran netminder has been irrefutably reliable for a month-plus, posting .932 SV%, 2.26 GAA and 5-2-1 record. While I’m not necessarily rolling him out for every occasion, a few selective starts against the Coyotes, Blackhawks, Blue Jackets, Ducks etc. should yield positive fantasy results. Managers desperate for some last-minute goaltending could do worse. He’s playing well.

Postgame analysis and highlight show airing each night throughout the season from Barry Melrose and Linda Cohn. Watch on ESPN+

Antti Raanta, Carolina Hurricanes (6.0%): Carolina’s backup to Frederik Andersen has been as good, if not better than the club’s No. 1, in recent play. More active this past month than he has been all season, Raanta is 4-1-2 since Mar. 1, boasting a .933 SV% and 2.09 GAA. If he can stay healthy – unfortunately an enduring concern – the 32-year-old should be fairly active through April while Andersen gets extra rest ahead of a hoped-for lengthy payoff run. He makes for an attractive streaming/DFS asset in these later stages.

Mathew Barzal, C, New York Islanders (86.8%): “When it hasn’t been your day, your week, your month, or even your yeeeear” … At least as applies to putting the puck in the net. The Islanders’ most popular fantasy asset has six goals through 31 games in 2022. He hasn’t scored since Feb. 17. The measly smattering of assists – five in March – hardly makes up for that deficit. Now the former better-than-point/game producer is logging fewer than 15 minutes/contest on a third line with Zach Parise. No thanks. Barzal will undoubtedly regain his scoring form, but how soon?