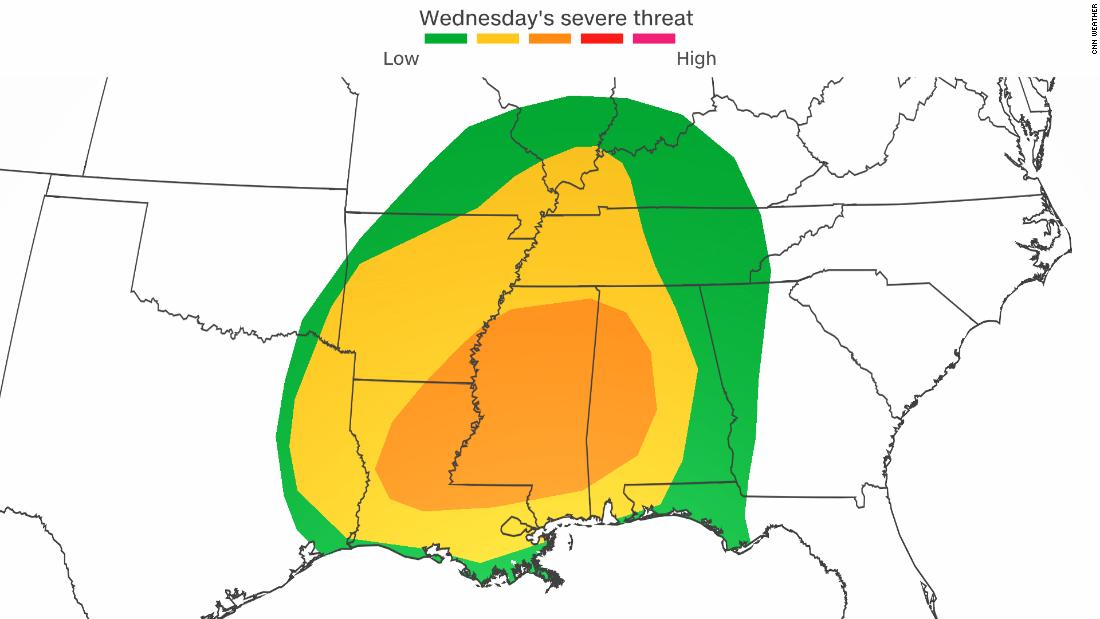 With the threat of tornadoes returning, the thought of it has us shaking our heads. Not again.

We’re looking at another multiday severe weather week. Both Tuesday and Wednesday will bring the possibility of severe storms and tornadoes. However, I want to start with Wednesday, because I think it’s going to be our biggest day, then I’ll jump back to Tuesday’s threat.

The Storm Prediction Center (SPC) has placed a Level 3 out of 5 “enhanced” risk of severe weather for Wednesday for parts of the Lower Mississippi River Valley. Places like Jackson, Memphis, Birmingham, Baton Rouge and New Orleans could all see strong storms and even tornadoes.

“The line should enter the region shortly after noon arriving in the Baton Rouge area around 4 p.m., New Orleans 7 p.m., Gulfport 9 p.m. and exit the area around midnight Wednesday night into Thursday morning,” said the National Weather Service (NWS) office in New Orleans.

The SPC explained the main threat with the line of storms will be wind gusts, exceeding hurricane force at times, above 74 mph. And they emphasized tornadoes will be possible. The NWS office in New Orleans echoed the same message in its forecast discussion.

“Even if the line [of storms] remains intact, a QLCS tornadic environment will exist and if this line is capable of breaking into any discrete cells it would further enhance the possibility of tornadic development.”

QLCS (quasi-linear convective system) tornadoes form very quickly with little warning along a line of storms. They are the exact types of tornadoes we talked about last week, which our friend Chris Weiss and other scientists are out in the field trying to study. In fact, Weiss emailed me this morning, saying they were going to be out again this week to once again put their lives on the line to study the storms.

You never want to hear more storms are headed your way if you are in an area just devastated by a tornado. Lauren Nash, NWS New Orleans meteorologist, told me on the phone today they have been trying to get the message out to the public to be prepared.

“So, what we’re just trying to do is tell everybody that every event is different, and every event you need to stay aware. But those who were impacted, not only by the tornado last week, but also by Ida, they’re all in substandard housing. So there just has to be a little extra emphasis on making sure that they stay weather aware and know where to go if a watch or a warning is issued.”

To be honest, we’re still wrapping our heads around what happened in the New Orleans area last week. The images have been jaw-dropping. A school bus was lifted and carried, we’ve seen entire houses lifted off their foundations, homes and businesses destroyed. It was utter destruction for some neighborhoods in hard-hit St. Bernard Parish.

Flying debris is a real threat this week in places where the strongest storms went through last week.

Where the tornado went through St. Bernard Parish, there is still debris lining some roadways. Nash told me much of it has been cleaned up, but what is still lying around could pose a potential threat if the winds gusts top 60 mph, as expected Wednesday.

“Whenever you have that 60-70 mile per hour winds, it’s going to pick up a lot of that debris. So, it’s important to stay inside when we have a wind advisory out and if we do have warnings, just go into an interior room.”

We will have to watch the forecast closely over the next few days to see if the SPC increases the threat level for storms.

Severe weather to impact the Plains

I mentioned earlier there would also be a threat of severe weather on Tuesday. Here’s where the biggest threat for storms will be, according to the SPC.

Portions of Texas, Oklahoma and Kansas are all included in a Level 2 out of 5 risk of severe weather. Places like Dallas, Oklahoma City, Tulsa and Kansas City, Missouri need to be on the lookout for strong storms on Tuesday. Gusty winds, large hail and the possibility of tornadoes will be the primary threats.