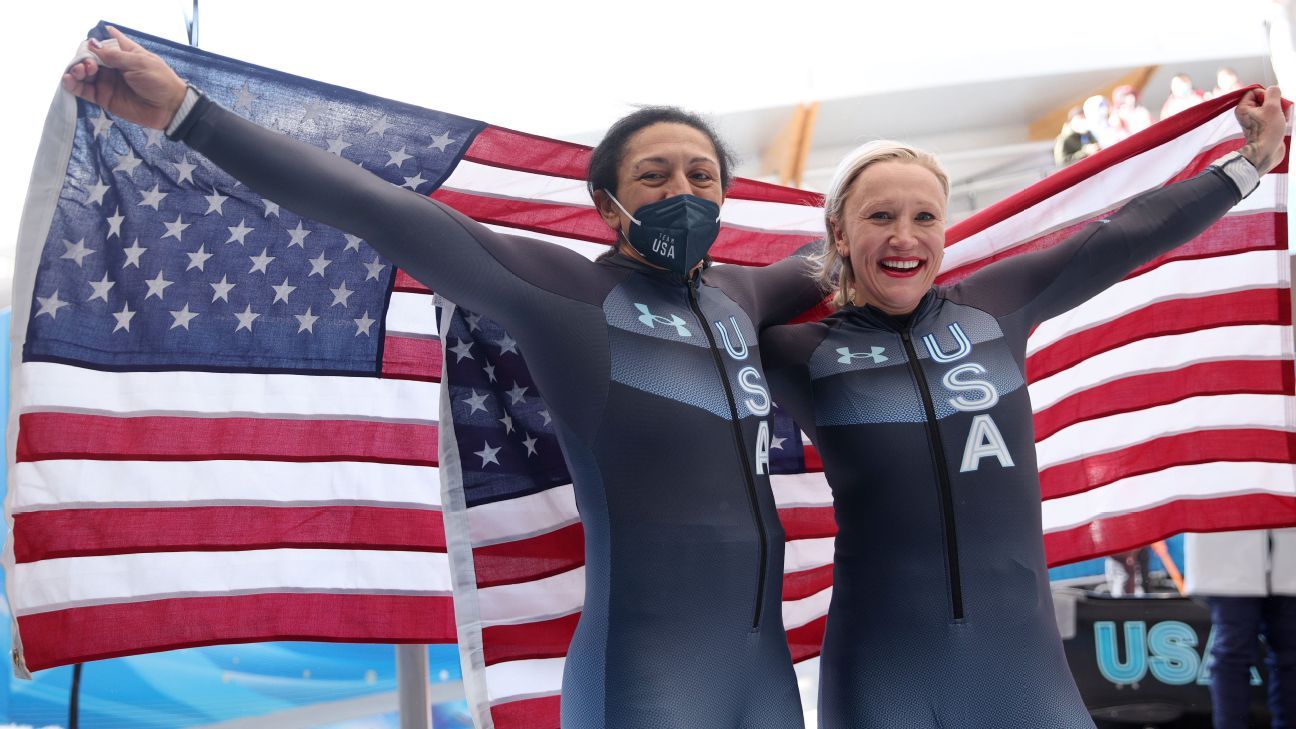 The 2022 Winter Olympics is once again jam-packed with excitement tonight. First up, in bobsled’s new event, monobob, Kaillie Humphries won her third Olympic gold medal, and Elana Meyers Taylor moved up two spots from yesterday to earn silver. Both women have won a medal in an astonishing four straight Olympics.

And don’t party too hard Sunday. Team USA women’s hockey faces Finland on Monday morning at 8:10 ET for a shot at the gold medal. The winner of that semifinal game will face the winner of Canada vs. Switzerland.

Two medals for the U.S. in monobob

Humphries dominated the event, leading by 1.54 seconds by the end. Meyers Taylor, who had been in fourth after her first two runs, made up time in the third and fourth runs to finish ahead of de Bruin at 4:20:81. An emotional Meyers Taylor, who took an entire season off to give birth to her son, Nico, screamed “We did it,” as she got to the finish line.

Humphries, a three-time Olympic medalist and five-time world champion, received her American passport in December 2021. She left Canada for the U.S. due to a divisive separation from Bobsleigh Canada, after she accused her former coach of mental and emotional harassment. She was a part of Bobsleigh Canada for 16 years, representing Canada in three Olympic Games — Vancouver, Sochi and Pyeongchang — and won two golds and one bronze medal in the two-woman bobsled events.

With this gold medal, she became the first American to win a gold for two countries — USA and Canada — at the Winter Olympics.

Meyers Taylor also had a rough journey to Beijing. She tested positive for COVID soon after arrival and was unable to walk as flag-bearer in the opening ceremony. She isolated for a week, and produced two negative tests right before training for monobob and the two-woman bobsled events began. — Aishwarya Kumar

Kamila Valieva will be allowed to skate in the women’s singles competition after the Court of Arbitration for Sport ruled not to reinstate her suspension. The 15-year-old Russian had tested positive for a banned substance.

According to a media release, the panel considered that “preventing the athlete from competing at the Olympic Games would cause her irreparable harm in these circumstances.” It also cited the lower sanctions for her as a “protected person” due to her age and noted that the late reporting of the test, which was taken in December, was “not her fault.” A timeline of the doping allegations.

For three of the world’s top ice dance teams, tonight was about unfinished business.

Four years after finishing fourth, Madison Hubbell and Zachary Donohue finally got the Olympic medal they dreamed of in their very last competitive skate.

What a finale. ?@MadiHubbell and @ZachTDonohue close out their ice dance career with the Olympic bronze medal after a stunning free dance performance. #WinterOlympics pic.twitter.com/V6wr4DREFC

The U.S. team finished in third, behind Gabriella Papadakis and Guillaume Cizeron of France and Victoria Sinitsina and Nikita Katsalapov from the Russian Olympic Committee.

Papadakis and Cizeron won gold with an exquisite performance — possibly one of the best ever — and banished the memory of Pyeongchang, where they skated through a wardrobe malfunction and still won silver. They broke their own world record yet again, just like they did in the rhythm dance.

Americans Madison Chock and Evan Bates finished fourth despite a personal best score for their Daft Punk-soundtracked free skate about an alien and an astronaut. Four years ago, they both fell during the free dance. Now, despite finishing off the podium, they can leave Beijing with their heads held high (and a team medal to boot!).— Elaine Teng

A rematch of the recent X Games Aspen big air showdown between U.S. snowboarder Jamie Anderson and Zoi Sadowski-Synnott of New Zealand will not be in Beijing.

In her third attempt, Anderson landed a gorgeous frontside 1080, scored an 89.75 and nearly qualified on that score alone. But ultimately, she finished 14th.

Two-time Olympian Hailey Langland grabbed the 12th and final qualifying spot to become the sole rider who will represent Team USA in the final.

Meanwhile, over on the slopestyle course, the focus — and the on-site cheering — was directed at recent freeski big air gold medalist Eileen Gu of China. One of the most popular athletes at these Games, Gu, who was born in San Francisco to a Chinese mother and American father, struggled in her opening run. She laid down a solid second run to qualify in third place. “I don’t know why, but qualies are always way more nerve-wracking than finals,” Gu said in the finish area, eating a bao bun.— Alyssa Roenigk

From Beijing to the Super Bowl

Olympic legends Shaun White and Chloe Kim are both posting from the Super Bowl … a mind-boggling transportation achievement it’s best not to think too much about: