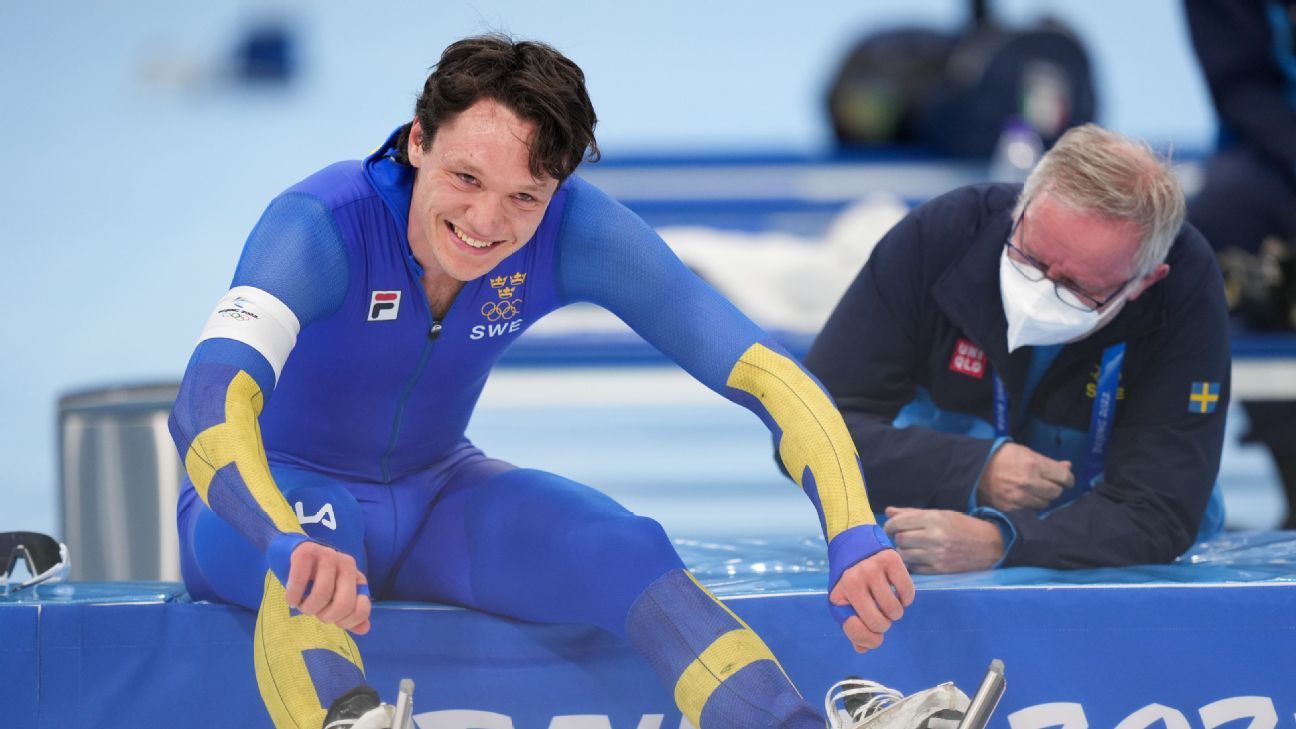 Nils van der Poel is not sure what his future is in speed skating. He’s tried — unsuccessfully — to quit the sport at least three times. Still, he’s on the ice again at these Olympic Winter Games in Beijing, where he has won gold in the 5,000 and 10,000 meter. That 10,000 win came with a world record, too. So, finally, is this it?

It was incredible to watch as he shaved millisecond after millisecond off his own world record, corrected the odd mistake and then posted a time of 12:30.74. And all this as he battles his own love-hate relationship with his craft but having single-handedly broken the Dutch stranglehold on the sport. “Speed skating is not about suffering — it’s about enduring hardships with ease,” he said after the 10,000.

He leaves the Olympics having launched a blistering attack on the Dutch team bosses’ integrity and with no guarantees he will be back to defend his title at Milan 2026. If he does walk away from the sport, then he hasn’t upset the applecart — he’s torched it.

Van der Poel, 25, is a fascinatingly multi-dimensional character. Listening to him speak of his sport and taking a glimpse at his Instagram page, you can’t quite be sure he even likes speed skating.

“When you’re a professional athlete in a sport that sucks as much as speed skating sucks, you’ve got to find a way to make it suck a little less,” he said earlier in the week. “Whatever you can get inspired by, you need to find. What do you have to bribe yourself with, to train more than that? If you can find that, perhaps you can win the Olympics.”

Van der Poel is unique in the sport, embracing his status as a one-man army. While the Dutch train together, having long held an almighty grip on the ice (sweeping seven gold medals in PyeongChang and eight in Sochi), Van der Poel embraces his individuality.

His training is anchored away from the rink. Instead of spending time on the ice, he does everything else but speed skating and does it nearly entirely on his own, contacting his coach via the phone.

“I did 20 ultras, 1,000 skydives, I served in the army for a year, I do a lot of parties,” he said earlier this week of his training methods. “I went snowboarding a lot. I went ski mountaineering. I biked the whole of Sweden. I made it adventurous, because I knew there was a time when I would lock myself up, enduring it. I had to build up a mountain of motivation.”

When he was 18 years old, he told himself he wouldn’t go to PyeongChang 2018. Three years on and after he’d competed at PyeongChang, Van der Poel spent just over a year away from the sport with the Swedish Army in the Ranger Battalion. It was a brutal training regime.

He returned to training in May 2019, doing everything except for speed skating (he spent the time cross-country skiing and cycling), and by February 2021 he had broken world records in both the 5,000 and 10,000m. He celebrated his triumph by running the nearly 15 miles back to his hotel.

But just a few weeks later, his mother — a deaconess who also helped the underprivileged — died of cancer. Van der Poel channeled that grief into his sport. “There are all kinds of reasons why I might despise life from now on,” he said. “But there are people who need the best of me right now. My mother gave me everything I need.”

This time he insisted he wouldn’t go to Beijing 2022.

Yet here is again, on the Olympic stage,channeling that motivation into plotting how to end the Dutch dominance.

His competition started in earnest on Sunday with the 5,000m. It was remarkable.

The young Van der Poel used to race against Patrick Roest and would usually lose. He’d make a vow to himself on the bus back from the competition that he’d beat him the following year. He did that in Heerenveen in the World Championships in October, but he would have had flashbacks of his 12-year-old self when he saw Roest break the Olympic record for the 5,000m. Roest was in the fifth pair, Van der Poel the last, so by the time Roest came through in 6:09.31, Van der Poel knew what target he’d have to hunt down.

But with three laps to go, Van der Poel trailed Roest’s time by more than two seconds and was 0.99 off heading into the final circuit. But he somehow put in a final lap of 28.97 seconds to take gold by a lead of 0.47, and with a new Olympic record of 6:08.84.

“The hard thing while speed skating is the first 80% of the race,” he said. “When the last laps come, that’s when it sucks the most, but you just give it your all. Go for it. The problem is when you give your all with five laps to go. Then you’re f—ed. Set yourself with three laps to go. That’s tough, but easy tough.”

He said after that he’d benefited from being drawn last, so he was the chaser, rather than the chased, but in the run up to the men’s 10,000m he went on the front foot.

On Wednesday, Van der Poel was alerted to article in the media titled “We Own the Ice,” where the Dutch team’s sport scientist Sander van Ginkel was quoted about how it’s his job to try to influence the temperature of the ice “to create as favorable conditions as possible for our skaters.”

When asked about the article at a press conference that day, Van der Poel gave a concise answer, saying, “For me it’s more efficient to train than worry about the ice.”

He then asked for a copy of the article, which the journalist handed over. He paused, started saying how much respect he had for the Dutch speed skaters and the trust he had in the “ice makers.”

But then he let the Dutch have it.

“This is far from fair play,” he said. “This isn’t my idea of fair play. The Olympics is higher, stronger, faster. This is corruption. This is trying to alter the field of play in your favor by using unethical and immoral means.”

He labeled it “the biggest scandal” in speed skating, saying it was not any less serious than doping.

“Either they are actually trying to make the ice beneficial for the Dutch skaters, that’s an abomination,” he said.

“That’s corruption. That’s proper f-ed up, really. Or they are writing an article, releasing it on the day of the start of the Olympics because they want to conduct a psychological operation towards the other skaters.”

The article prompted a huge backlash in the Dutch press.

“We really distance ourselves as far as we can from the words used in the declaration,” Maurits Hendriks, the Dutch Olympic Committee technical director, said. ‘If you look at the facts then it’s about measuring the ice temperature. This is something that has been going on for decades. It will go on for decades.”

It dominated the narrative heading into the 10,000m and afterwards. It also increased the tension between Van der Poel and the sport’s dominant force. While Van der Poel has friends among the Dutch skaters, he’s aware that his method of gate-crashing the sport (through his own training methods) is not entirely popular.

“There are more Dutch who wish me not to succeed than Dutch who want me to succeed,” he said, laughing after his 5,000 triumph. “I have always experienced big love from the Dutch fans.”

But he broke their hearts again in the 10,000m as he took gold, leaving his old rival and friend Roest with silver in second. “The ice was excellent,” he said afterwards.

In the coming days he will publish a document. It’ll be called something along the lines of “How to race a 12.3”, a nod to his world record.

“I think the document is my attempt of giving back,” Van der Poel said. “I would like to point out the importance of chasing your own dreams. You must live with whoever you become, and those around you have to live with that. It’s important to be who you want to be, and not what others want you to be.”

Success can breed complacency or contentment, but Van der Poel doesn’t conform to rational sporting thought. It’s like he’s been railing against the sport he was born to do since he was young but now he has two world records and a star with his name in the park back home in Trollhättan.

Central to his future plans is the ability to share this success and passion with his friends. It’s a lonely existence, but he will take time to pause.

He won’t make any calls based on “stubbornness or the outcome of competitions”. He said earlier this week the future wasn’t a “clear vision, more a fog of the colors of the rainbow”.

He’s blazed a trail of success on ice, but whatever comes next, it’ll be on his own terms.

“I owe who I am today thanks to the sport, and the other skaters around the world,” he said. “But I don’t owe them my life, or my future.”