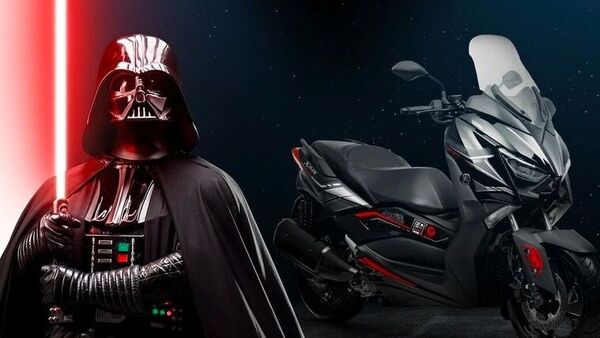 Yamaha XMax 250cc scooter has been launched in a new special Darth Vader edition in the market of Brazil.

Yamaha XMax 250cc scooter has been launched in a new special edition in the market of Brazil. The new special edition model has been rolled out in a new Darth Vader Edition. This special iteration of the model draws its name from the legendary antagonist of the Star Wars universe and also gets a special exterior treatment inspired by the evil fictional character.

On the outside, the new Darth Vader edition model comes with a menacing-looking black paint scheme with red accents for a sporty appeal. One of the key highlights of the new scooter is the use of the new front fascia that reminds of Darth Vader’s face mask. This is further accentuated by the sharp and aggressive lines body lines of the scooter’s headlamp featuring a split headlight setup of the original XMax. It also gets Galactic Empire symbols over the sides as well as on the front mudguard.

Apart from the updated design, the rest of the scooter remains the same. At the heart of the scooter is a 250cc single-cylinder liquid-cooled engine that is known to deliver 22.8bhp of power and 24.3 Nm of peak torque.

The hardware includes telescopic forks up front and twin shocks at rear along with disc brakes offered at both ends aided by ABS. The scooter rolls on 15-inch front and 14-inch rear alloy wheels with 120/70 (front) and 140/70 (rear) sized tyres.

In terms of features and equipment, it gets a fully-digital instrument cluster, Bluetooth connectivity, full LED illumination traction control, and a 12V charging port.

It has been priced at R$ 28,590 which is equivalent to ₹4.50 lakh. It is unlikely to be launched in the Indian market anytime soon.